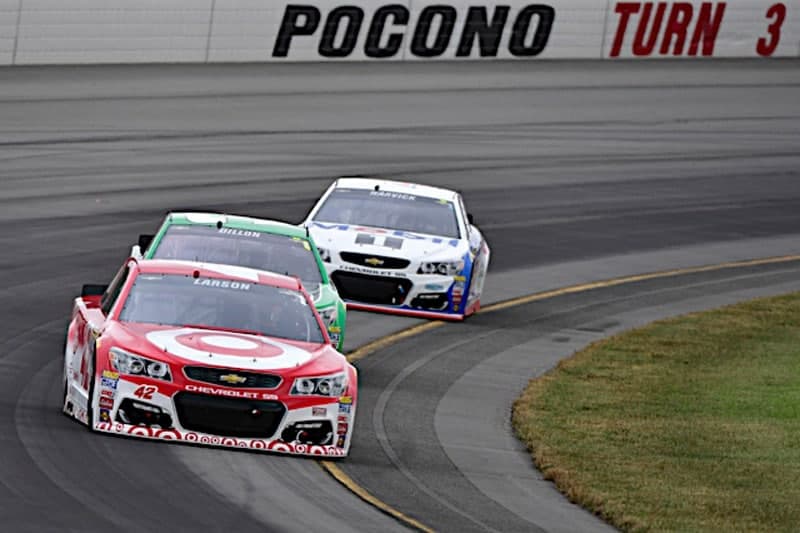 After a thrilling finish between Kyle Busch and Kevin Harvick at New Hampshire Motor Speedway, the Monster Energy NASCAR Cup Series heads to the Pocono Raceway for the second time this season on Sunday, July 29.

39 cars are on the preliminary entry list this weekend with some notable changes.

Premium Motorsports will enter two cars this weekend with the No. 7 of Reed Sorenson and the No. 15 with Justin Marks behind the wheel.  Ross Chastain has driven the No. 15 car most of the season, but with the NASCAR XFINITY Series in Iowa, that will be Chastain’s main focus. He’ll return to his full-time ride there running the No. 4 Chevrolet for JD Motorsports.

J.J. Yeley, as part of a partnership with NY Racing will be in the No. 23 car this weekend for BK Racing.  Blake Jones drove the car to a 33rd-place finish at New Hampshire in his Monster Energy NASCAR Cup Series debut.

BJ McLeod is listed as the driver of the No. 51 car for Rick Ware Racing for the third consecutive week.  McLeod will look to improve upon his best finish this season of 32nd, which came at Kentucky.

Among the part-time efforts, Timmy Hill returns to the No. 66 car for Motorsports Business Management. Hill finished 34th in his last outing at Kentucky. Kyle Weatherman is also back in the No. 99 car for StarCom Racing after a 31st-place finish at New Hampshire.