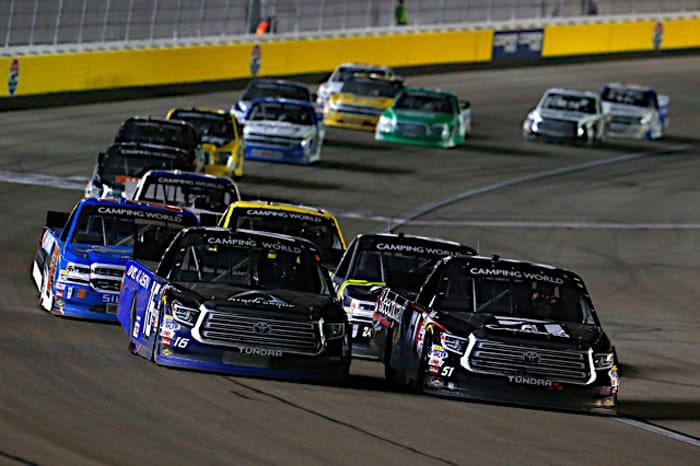 As we near the end of the regular season in the three top series in NASCAR, the race to the playoffs is beginning to heat up. All three series have their set championship contenders, but it has yet to be decided who will make it into the postseason.

The Camping World Truck Series features some of the best racing on a week-to-week basis and its playoff race is intriguing right now. Some guys on the outside-looking-in have a chance to break through and steal a win and lock themselves into the championship battle before it begins. The question is, who should we pay attention to?

The NBC broadcast team debuted a new booth setup this past weekend at New Hampshire. Steve Letarte, Jeff Burton and Dale Earnhardt Jr. all commentated the race from the booth while Rick Allen, the normal lead commentator, debuted as a pit reporter for the first time in his broadcasting career.

It was a casual broadcast for the crew with fans voting what their wardrobe would be, and the three in the booth being themselves and having some fun. Is this something we should look out for even more in the future? Was this just something that NBC should have tried or should it stick to the traditional broadcast without stuff like this? It was an interesting broadcast overall, to say the least.

Q: With the playoffs approaching for all three series, which series do you think is the most unpredictable right now? –Mandy C. Reno, NV

A: That is a tough question because all three series have a good playoff race going. If we look at the points gaps, you would think the Monster Energy NASCAR Cup Series would be at the top of my list with as close as it is compared to the other two series.

It’s actually the Camping World Truck Series, though. Not because of the points gap between eighth and ninth, because in reality, it is not as close as we would like it to be at this time of year. It is because the series is so unpredictable on a week-to-week basis. There are at least 10-12 drivers that can steal a win every single race, no matter what track the series goes to.

It’s fair to say that Johnny Sauter, Noah Gragson and Brett Moffitt are the three favorites for the championship and arguably the three most consistent drivers in the series this year. However, if we look at drivers like Stewart Friesen, Grant Enfinger, Ben Rhodes and several others, we see so many contenders. Rhodes just scored his first win of the year at Kentucky and is starting to show that he can be a championship threat. Enfinger and Friesen have not won this year but both have been very close. Enfinger barely lost to Chase Briscoe in the previous race at Eldora, while Friesen was the runner-up in the previous week at Kentucky.

Both drivers are already in the playoffs, but drivers outside the playoffs right now include Todd Gilliland, Myatt Snider and Dalton Sargeant. Now I know Snider and Sargeant have not had the strongest years but they are both with top teams and have shown signs of great speed certain weeks and have had chances to steal wins at times. Gilliland, though, is an interesting situation. He started the season not being old enough to run on tracks bigger than a mile but then turned 18 in May and was able to run the full schedule. He does have a waiver if he does win so he would be in the playoffs. Being with Kyle Busch Motorsports, he has an excellent chance to win every single week so I would not be surprised if he won in the next few races.

Who would that knock out if that happened? How about two-time series champion Matt Crafton. He has not won since Eldora last season. Crafton has shown speed all year, but it seems like execution is a big thing with his team as to why they haven’t had a strong year compared to others. He’ll get going and I do expect he’ll make the playoffs one way or another and he’ll be competitive.

With all of that said, the Truck Series will have the best playoff race coming down to the end of the regular season. I do not think we are done with new winners in that series and we are due for some exciting racing coming up in the next few weeks.

Q: What did you think of the way NBC conducted their broadcast on Sunday? Would you like to see more like that or the traditional broadcast like what we have been used to? Cody G., Newark, NJ

A: I loved NBC’s broadcast on Sunday with Letarte, Burton and Earnhardt in the booth. Not only that but the casual clothing was cool to see for a change.

Don’t get me wrong, I like the traditional booth with Allen and the other three guys every weekend, but it was just more enjoyable to watch these guys casually commentate the race. They make it sound like they are having a lot of fun doing this too, which adds to the quality of it. Being yourself throughout a broadcast is something that I appreciate a lot, and that is what the booth exemplified this past weekend. I know some people were not thrilled with the racing shirts and the booth setup, but I was a fan.

I am not sure if I would want to see that all the time, though. It is great for one or two weeks but after that, it wears off with the uniqueness factor. Casual broadcasts are fun to watch, but many will say it takes away from the professionalism that they are supposed to have.

Fans were allowed to vote on the wardrobe for the crew as well this past weekend. The majority did vote on racing t-shirts and jeans, while a suit and tie got the lowest percentage of the votes. Is that bad for broadcasting to have the clothing not be the suit and tie? I really do not think it matters. It is always professional to see the guys commentating the race in proper clothing like a suit and tie, but I do not see the big deal as long as they are doing their job in the booth.

Like I said before, I really do not want to always see it because it felt unique. NBC puts on a great broadcast every weekend though. I thoroughly enjoy listening to the four commentators in the booth. They have had the chance to broadcast arguably three of the best races this season with Chicago, Daytona and this past weekend at New Hampshire. Adding Earnhardt was one of the best moves they could have made too. He adds so much to the broadcast and it is truly enjoyable to listen to his insight and the charisma he brings to the team.

We will most likely see the traditional broadcast being utilized most of the remaining part of the season which is perfectly fine by me. A broadcast for the race is an important aspect and when you can hear the commentators having fun while the racing is good like it has been in recent weeks, it leads to success. Now as for the clothing options in the coming weeks, it will probably be the regular suit and tie. Is it a big deal what they wear? Not to me, as I said before. I think it’s cool to see the old school shirts come out like they did, but honestly, next time I would want to see that would be Darlington for throwback weekend.

NBC will continue their successful broadcasts this season no matter what they are wearing or who is in the booth. It was unique and fun to hear and see what we saw this weekend, but I hope we can see more of a mix throughout the rest of the season.

The answer is F1. They should be starting their playoffs soon. Oh! Wait! They don’t have that. Maybe they should consider it seeing as how it has helped Brian’s product.

Just an aside, on the NBC ‘Wendsdale’, Jr. said he bought too many new sportcoats and ties to continue to wear T shirts for the broadcasts. I thought that was pretty funny.