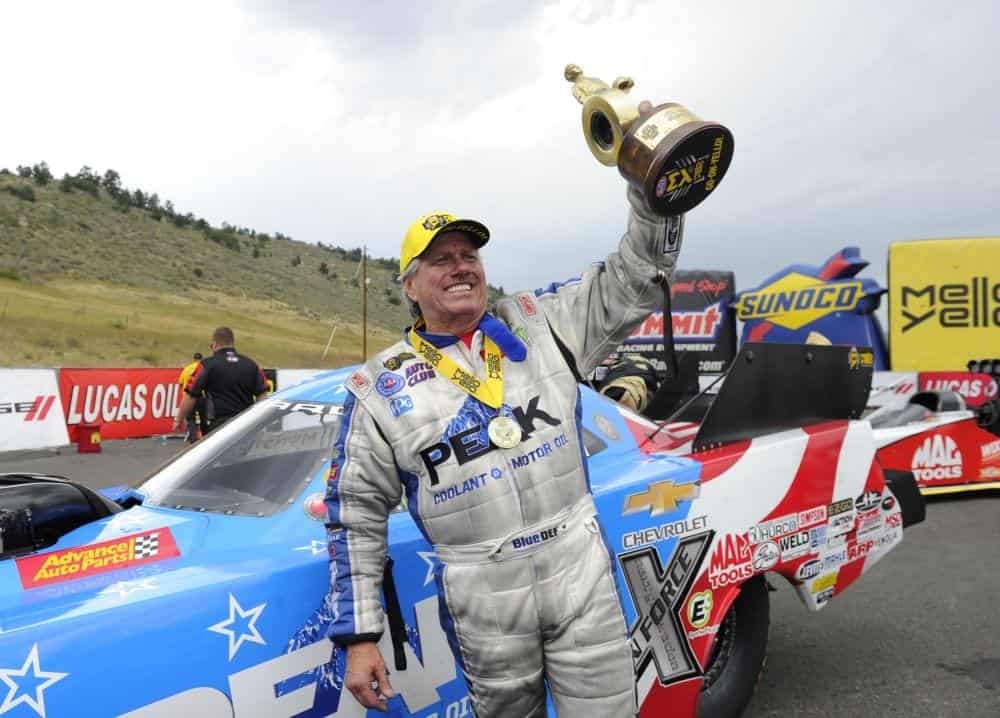 The NHRA has released the 2019 Mello Yello Series schedule and things are pretty much unchanged from the 2018 iteration. Richmond is back, the Countdown once again starts at Maple Grove, the regular season ends at Indy, and the season opens and closes in Pomona. Charlotte and Vegas stay four-wide for the first events and have second events in the standard two-wide format.

Speaking of John Force, he’s a poster child for the old saying that age is just a number. At the age of 69(perhaps?), he is still competing and winning at a very high level. We asked him in an interview four years ago about racing in his 60s. He conceded that it was a “push” but this is what he had to say about it then.

John Force: “At 40 we just start. First of all we’re not like NASCAR or IndyCar where you gotta drive around for 2 or 3 hours. Yes, you have to have reflexes of a young man, but if you train yourself, and I was in the gym last night and the night before and I’ll be there tonight, until I get too tired and when I go home, I feel like I’ve worked out too much, then I don’t work out, but it’s at least every other day. So I keep my mind sharp, stay in the race during the day, don’t get tired, and don’t think about retirement. If you retire you have to make sure you made enough money to keep eating! So yeah, there’s a reason why. I knew a lot of the champions that quit 20 years ago. A lot retire in drag racing at 40 and 45. 65 is a push, but I do it because I’m good at it, and surround myself with good people, and train for it. I keep my mind sharp. Don’t party. Don’t mean you can’t have a beer or a glass of wine, but not a few days before the race. You’ve got to keep everything going for you.”

Montgomery: So you are nowhere near the point where you don’t want to do this anymore?

Force: “No, I’m under contract for five more years! But you’ve got to have corporate America to pay the bills and that’s why I keep pitching it. I’ve made it clear, I love the fans, love the excitement, love the racing, love the travel, love being here with my wife and kids, and my grandkids are usually here.”

OK, yeah, it’s John Force. This is some of what he had to say, but definitely not all of it. In typical fashion, we took some side trips during his responses, but they were definitely entertaining side trips. You can check that out in the full interview article linked above.

Pro Stock Motorcycle might only run two of the three Western Swing races, but the Sonoma event is a big one for the class as they also have their all-star event, the Mickey Thompson Tires Pro Bike Battle. Eight of the top riders will battle it out for a $25,000 prize and bragging rights. As with the other all-star events, this will be a race-within-a-race as the first two rounds will run during Saturday qualifying. The finals will be contested after qualifying.