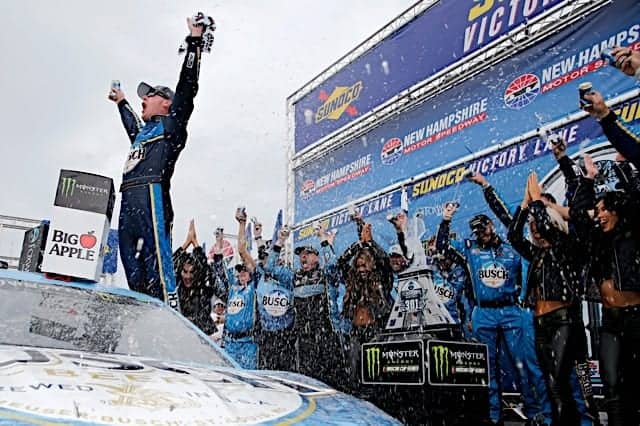 The Monster Energy NASCAR Cup Series made its annual summer visit to New Hampshire Motor Speedway this weekend. What used to be the first of two races is now the sole visit by the Cup Series. Without the second trip in the fall, the two races a year tradition ends at 20 years.

The Big Three all made an appearance up front on Sunday, one of which ultimately landed in Victory Lane with the lobster in hand. Some other drivers also made appearances up front including Aric Almirola, Chase Elliott and Kurt Busch.

Unlike last weekend, Martin Truex Jr. didn’t steal the spotlight, meaning drivers are making moves on the power rankings and on the playoff grid.

Kevin Harvick posted another victory on Sunday by pushing Kyle Busch out of the way with seven laps remaining. The victory was his sixth of 2018, the most he’s ever earned in an individual season. It’s also the first win for the No. 4 team since Kansas in May which means the summer may not be done seeing the Buschhhhhhhhhhhh car in victory lane.

It was just like Chicagoland for Kyle Busch but the roles were reversed. Busch wasn’t a threat all day long until he got the lead via a strong pit stop. It seemed that he was going to run away with his sixth victory of 2018 until Harvick pushed him out of the way in the end.

Surprisingly though, no fists were thrown at the end of this finish like many had predicted it would.

This is the only home track that Martin Truex Jr. has failed to win at and that victory will have to wait another year. Truex led 83 laps on Sunday, but when it counted, he wasn’t in the lead and ended up with a fourth-place finish, his fifth straight top five.

Can Truex pull off the sweep of the Poconos with a victory this weekend?

If this team can get all of their marbles in one basket, they will win a ton of races. On Sunday, Kurt Busch led a race-high 94 laps, the most he’s led since Richmond earlier this year. Busch has already led more laps this year than he has in the last few seasons but still has a goose egg in the wins column.

Busch has three victories at Pocono; can Sunday be his fourth?

Car was fast today, that’s the positive takeaway! Speed! Honestly, this is my emoji.. ? What’s yours? pic.twitter.com/A3RLQQl4Ng

The performance of the No. 10 car hasn’t been this good since Scott Riggs drove it in 2006. The victory for the No. 10 is getting closer and closer and on Sunday, had the caution not came out for Clint Bowyer’s on track incident, a different Stewart-Haas Racing driver might have landed in Victory Lane in the form of Aric Almirola.

The victory for Almirola is within reach and could come this upcoming weekend at Pocono. 2017 wasn’t too good for him as he missed the first race due to his injury and then he was involved in an accident in the first lap, ending his run.

Congrats again to my teammate, @KevinHarvick, on his 7th win this season & congrats to everyone at @StewartHaasRcng. What an incredible year this team is having. I look forward to adding to SHR's win list myself here very soon. ?#SmithfieldRacing pic.twitter.com/5p8pW6LBm2

For those arguing that Kyle Larson is the fourth part of the Big Four, Larson has been missing up front ever since his XFINITY Series victory at Daytona a few weeks ago. Another disappointing finish on Sunday is just puzzling for the future of the No. 42 car at least once the playoffs begin.

Well we fought all race long on our @CreditOneBank @TeamChevy. At times I felt like I had a 20th place car that we turned into a top 7 car. Then the last run lost grip again and fell to 12th. Disappointing but better than where I thought I’d run to start the day.

SHR is starting to look like Team Penske circa 2014. The organization that continues working together as a team, which can ultimately result in good things for the future. It could get interesting being as all four cars have been competitive. Could 2018 become the first season where four cars from the same organization battle for the championship at Homestead?

Sick to my stomach. Feel terrible for @Aric_Almirola. Had something broke on LR and was nursing it to finish and then the RR broke getting into corner. It never got any worse so I figured it was just a shock mount broke or something and would be fine. SHIT!!!!!!!!!!!

Since his victory at Daytona, Erik Jones has kept it consistent which is what needs to be done as the series heads closer and closer to the playoffs. Some tweaking could result in the No. 20 running up front again much like it did in 2013 – 2016.

16th @NHMS Not the day we wanted for our @DEWALTtough #Camry but we’ll learn from it and come back stronger #DEWALTtough #TeamDEWALT pic.twitter.com/vbyYvuzSXb

Much like some people do in NASCAR video games, it seemed that Ryan Blaney did everything right in the first stages of the race but he just fizzled out as the race continued. In the end, a miscommunication error on pit road cost both Blaney and Kurt Busch a strong day.

Passed a lot of cars yesterday for sure. Probably the best we’ve been there throughout the whole race. Good effort. Stinks about that miscue on pit road with the 41. Hate it hurt both our days.

Chase Elliott is starting to make strides towards where he was last season. He won the second stage and ultimately remained up front during the final laps of the race. He landed a fifth-place finish, his first top five since Sonoma. The last time Elliott finished inside the top five, he ended up outside the top 10 three straight races.