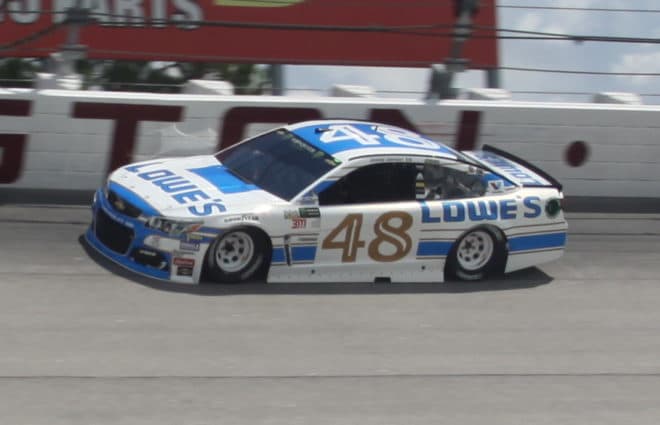 Friday Faceoff: Are Drivers Too Quick to Use the Bumper These Days?

Many racetracks have unique traditions for the winner. For example, the race winner at New Hampshire Motor Speedway holds up a live lobster in Victory Lane. What is your favorite Victory Lane tradition, prop or recurring celebration in racing?

Bryan Gable: It’s not specific to one track, but I enjoy the Polish victory lap.  Alan Kulwicki began popularizing the clockwise lap 30 years ago when he won his first Monster Energy NASCAR Cup Series race.  The idea was for Kulwicki to be more visible to the fans as he circled the track and to do something memorable to mark the occasion of his first victory.  The Polish victory lap remains simple and effective.  It fulfills Kulwicki’s original goal of getting closer to the fans, and drivers who do it today help to preserve his memory.

Matt McLaughlin: The grandfather clocks at Martinsville Speedway seem to be the nicest bonus handed out to NASCAR race winners. I support the Second Amendment, but I’m not entirely comfortable with the six-shooters at Texas Motor Speedway often being handed to a race winner who has a beer in his other hand. Some drivers can pull off the Stetson look, others look like overgrown trick-or-treaters out scamming for candy.

Clayton Caldwell: The grandfather clock at Martinsville. Everything about that track is amazing, and the trophy is the best thing it has. Could you imagine the uproar if it decided not to give away the clock anymore? Everyone would riot.

Mark Howell: Albeit both dated and politically incorrect, I always got a kick out of Johnny Reb riding the hood of the winning car into Victory Lane at Darlington Speedway following the Rebel 500. The character (played for a while by a young man from the country of Holland, oddly enough) would wave the Confederate battle flag in a stereotyped depiction of the region’s southern legacy. I also miss seeing winners at Nashville receiving a guitar for their efforts. Guess I’m just old.

Frank Velat: The spark shower in Victory Lane at Bristol Motor Speedway after the night race is a cool touch. Lately, I’ve found myself in great admiration of drivers who hand the checkered flag through the fence to a young fan. It’s such a simple gesture that takes nearly no time or expense, but it creates a moment that will live forever in the memory of that fan.

We’ve seen a few instances of leaders booted out of the way late in races recently. Are drivers too quick to use the bumper?

Caldwell: There’s a difference between bumping someone out of the way and wrecking someone. As long as Kevin Harvick is aware that he has one coming to him, it’s all fair game.

Howell: Drivers running in second place are trying to take their best shot on every lap; rarely do we see drivers content to merely ride around behind the leader. Using the chrome horn seems to be a natural decision once all other options have been exercised. The difference is in how well a driver can execute the bump-and-run. When bumping turns into dumping and the competition gets the wrecker’s hook, there’s reason to be angry. Winning comes by any means necessary, as long as those means don’t result in a good car getting bad treatment on purpose.

Velat: The importance of winning has become such that taking a shot at the leader has become standard practice. The pressure from the sponsors, fans and others associated with the team has made winning at all costs necessary. A driver could punt the leader to score a win only to face retaliation down the line. The first win may cost you the second one, but it’s better than not winning at all.

Gable: A proper bump-and-run is always about risk vs. reward. Harvick’s case was more unique than most because rain was threatening during the closing laps of the race.  Harvick was probably also thinking about last month’s race at Michigan International Speedway when he ran out of time to pass Clint Bowyer before a rainstorm cut the race short.  Since nobody was sure if last weekend’s race would end under green, Harvick took a shot to pass Kyle Busch on the first good opportunity he had.  But generally speaking, if a driver performs a bump-and-run too early, they run the risk of having a caution flag come out before the race ends, allowing the rest of the field to catch up, including the driver who got bumped.  Every case is a little bit different.  The drivers know the risks and potential consequences of using their bumpers, and they will self-regulate those moves just fine.

McLaughlin: This is still stock car racing, not lawn croquet, right? In both instances, the driver who took a shot to the rear bumper was able to continue on and finish the race. Nobody got stuffed windshield deep into the wall. Those who take up the sword shall fall by the sword, but it’s all good.

As the one-year anniversary of the team’s last win approaches, Hendrick Motorsports had all four cars in the top 15 on Sunday for only the second time all year. Is there anything it could do differently to right the ship?

Howell: All teams experience periods of poor performance (as long as you define poor performance as “not winning”). Granted, the new Camaro has been a challenge, and there are young drivers in the process of gaining valuable experience, but what’s going on at Hendrick is pretty much a natural state of affairs. Ripping Jimmie Johnson and Chad Knaus apart simply because they’re having a losing streak isn’t a smart strategy. They’ll find their way to Victory Lane again, and it’ll be sooner than later.

McLaughlin: It’s not like HMS is lacking in talent or resources. If I knew how to return it to form, I’d be sitting across the desk from Rick Hendrick waiting for him to hand me a blank check and a turbocharged Fisher Space pen. It’s not like the other Chevy teams are weekly front-runners. The Bowtie brigade’s only win this season was Austin Dillon at Daytona International Speedway, and the plate cars are as comparable to the cars used in the other 32 races a season as a flounder is to a piranha.

Gable: The only thing that will fix Hendrick’s woes is time.  The team has undergone too much change at once, and it is still figuring out how to adapt.  With Johnson struggling to find speed, Chase Elliott fighting to finally get over the hump and reach Victory Lane, Alex Bowman trying to hang on to a playoff spot and William Byron being brand new to the Cup Series, the sum of Hendrick’s issues is weighing the team down.  However, the postseason is a whole different ballgame, and at least Johnson and Elliott are likely to represent HMS in it.  There is cause for concern in the Hendrick camp, but the 2018 season isn’t a lost cause just yet.

Velat: Teams are often to quick to react in these situations. There is no need to make changes just to shake things up. Perhaps it’s less about how much Hendrick Motorsports has lost and more about what everyone else has gained. No one stays on top forever, and HMS hasn’t seen struggles like this in a long time. Did we really think the mighty were infallible? Besides, it’s foolish to think it hasn’t tried to diagnose the problems internally. I don’t expect the longtime leader of the pack to spend too long in the basement; it’ll get it righted soon enough.

Caldwell: Not really. The Chevrolet people are eating crow because it messed up a bit with this Camaro. Part of the problem was thinking it would be able to work out some of the problems with the new car throughout the year. That has not happened because of the Optical Scanning System. It’s so precise that you work in an even smaller box than you did before, and it’s hard to catch up.

Many teams have revealed throwback schemes for Darlington Raceway, and still more are slated to be unveiled soon. What is a potential throwback design that should be used by someone?

Velat: With this being the final year of Lowe’s and Johnson being together, they really need to do a blue-and-yellow design similar to the ones used by either Brett Bodine or Mike Skinner. I’ve seen fan-created versions online, and it would a be a popular look that hearkens back to the good old days. The other one that ought to be on someone’s radar is Kyle Petty’s Hot Wheels scheme from 1997-99. That was another car that was very popular among kids then for obvious reasons. Now that those kids are adults, I’m sure many would love to see it come back.

McLaughlin: I’d like to see someone run Tim Richmond’s old Folgers scheme on one of the HMS cars, and perhaps Jamie McMurray would be allowed to run a tribute to Bill Elliott’s old Thunderbat McDonald’s Ford. And as the seminal film Animal House celebrates its 50th anniversary (sigh) can’t we get a “Death Itself” car out there running at ramming speed? It would seem natural for the No. 18 team.

Gable: Since it looks like Matt Kenseth is going to race at Darlington, I would like to see a Mark Martin throwback design on the No. 6.  My pick would be the primarily blue-and-black Viagra scheme Martin ran in 2004.  I’d also love if somebody brought back the Square D lightning bolt scheme that Bobby Hamilton ran a few times in 2001.  I have no idea which team should use it, though.  It would be best paired with a sponsor that has something to do with power or maybe energy.  Perhaps five hours of energy.  Please make this happen, Furniture Row Racing!

Caldwell: I would like to see someone do the Morgan-McClure Motorsports Kodak scheme. That team is one from my childhood and a team I pulled for regularly. I’ve seen it done in lower divisions, but to see it in the top division again would be awesome.

Howell: The paint scheme the Wood Brothers ran with Tiny Lund to win the 1963 Daytona 500 would be a nice one to see, as would the colors run by Curtis Turner at Darlington in 1956. Another fun scheme was the old Heinz No. 57 design that Jimmy Spencer ran for a while. It looked like a big ketchup bottle and got the attention of casual fans. I’d like to also see the Smokin’ Joe’s Garage/Camel Cigarettes colors that Travis Carter ran with Hut Stricklin back in 1994; I was with that team for a brief period, and the effort made to keep Camel from being so obvious a sponsor was almost laughable. Still, the colors were pretty cool.

The Frontstretch Staff is made up of a group of talented men and women spread out all over the United States and Canada. Residing in 15 states throughout the country, plus Ontario, and widely ranging in age, the staff showcases a wide variety of diverse opinions that will keep you coming back for more week in and week out.
@Frontstretch
Previous Talladega Superspeedway Announces Infield Renovation
Next Tech Talk: Speed Down the Straights of Pocono 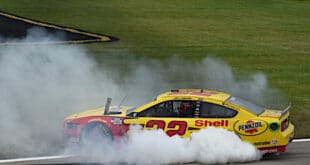 NASCAR Mailbox: How Similar is 2020 to Joey Logano’s 2018 Championship Season?