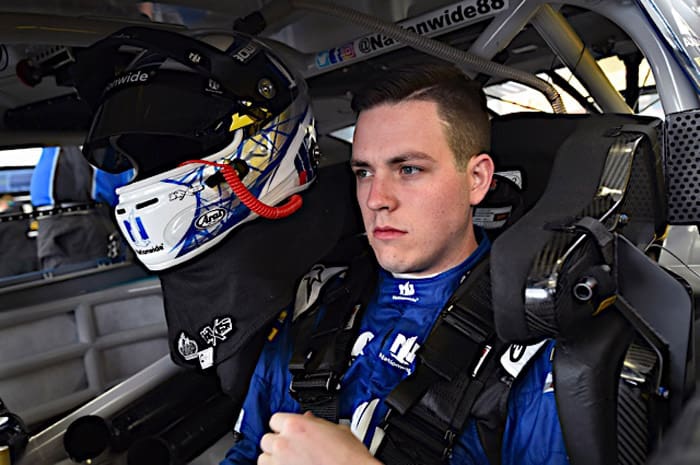 With Chevrolet introducing the Camaro ZL1 this season, it’s been a tiring time for all the Chevy teams, most notably Hendrick Motorsports. However, with six races to go before the playoffs begin at Las Vegas Motor Speedway, Alex Bowman is the bubble driver, in his first full season with HMS.

Bowman, 25, took over the No. 88 this season from Dale Earnhardt Jr., who retired at the end of 2017. Through the opening 20 events of 2018, the Arizona native has a best finish of fifth at Bristol Motor Speedway, with six additional top-10 finishes.

As the series heads to Pocono Raceway, which statistically has been one of HMS’ best tracks on the circuit, Bowman has a 28-point advantage on Ricky Stenhouse Jr. for the final playoff position.

“[We’re] Coming to the racetrack every weekend to win, that’s what we’re here to do,” Bowman said at Friday’s Pocono Fan Feast. “Obviously, we’re going to run the best we can. Can’t focus on those other guys because you can’t control how they run.

“We are going to focus on what we can control and that’s our own performance, and we’re going to do everything we can not to put ourselves in bad positions and to maximize every race.”

Prior to 2018, Bowman had never sniffed the playoffs, running two prior full-time seasons with BK Racing and Tommy Baldwin Racing. His best points effort was 33rd in 2015, when he led three laps and had a best finish of 16th at Talaldega Superspeedway. Now, being paired with seven-time Monster Energy NASCAR Cup Series Jimmie Johnson, as well as Chase Elliott and William Byron, making the playoffs is almost mandatory.

“It would be pretty cool. I think it’s expected for us, though,” Bowman said of making the playoffs. “It’s a big goal of ours, and it would be more of a letdown if we didn’t than big if we did. Hendrick Motorsports we’re expected to win races and contend for championships and that’s what I’m here to do. Hopefully, we can lock ourselves in and go from there.”

This week eclipsed the one-year mark since HMS last visited Victory Lane (Kasey Kahne at Indianapolis). Bowman believes it has been far too long, though as a manufacture, Chevrolet has just one victory this year, in the season-opening Daytona 500 with Austin Dillon.

Between Pocono, Watkins Glen International, Michigan International Speedway, Bristol, Darlington Raceway and Indianapolis, Bowman has a career average finish of 30.6, though much of that was in far worse equipment, even from a struggling with HMS. He’s looking to kick-start the No. 88 teams march toward the playoff at Pocono, where he finished a disappointing 27th in June.

“We show up here to win,” he said. “We had a fast car, we just couldn’t restart. We were on the splitter really bad taking off. That’s an easy thing to fix, hopefully we’re a little better this week.”