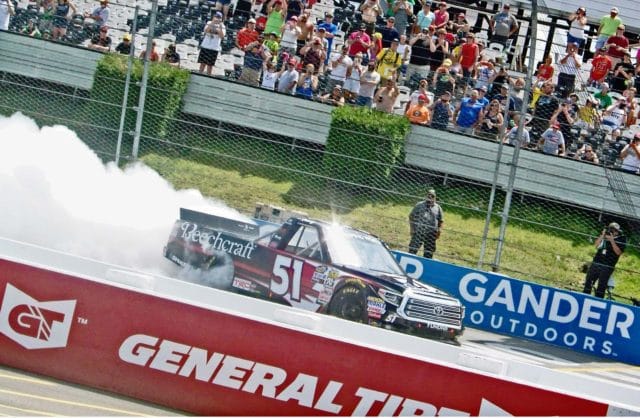 In a Nutshell: Whenever Kyle Busch enters a NASCAR Camping World Truck Series race, it very well could turn into the Kyle Busch Show, which is exactly what happened in Saturday’s Gander Outdoors 150 at Pocono Raceway, as he went on to record the victory, tying Ron Hornaday Jr.’s series record of 51 victories.

Busch started the race from pole but was passed by Kyle Busch Motorsports teammate Todd Gilliland on the opening lap. The No. 51 took the lead again on lap two and led the race until pitting on lap 12. For much of the second stage, Busch remained in the top spot until pitting with three laps to go, setting himself up to be in prime position for the final stage.

Much of the final stage was also dominated by Busch, though Erik Jones gave him a run for his money with eight laps to go. When the checkered flag flew, it was the No. 51 truck out front, after leading 43 of 60 laps.

“It feels good, it’s been a true testament to the people I’ve worked with and the race teams I’ve been able to score wins with over the course of my career in the Tuck Series,” Busch said of the achievement. “Just thankful for all the people who have been there and have worked with me. It comes from a lot of great people to get the job done, but it’s been fun. Hopefully, we can continue to do that and the winning ways can continue at Kyle Busch Motorsports.”

Who Should Have Won: It’s hard not to be boring, but Busch had the dominant truck, leading almost three-quarters of the event. Outside of the No. 51 truck, Gilliland led seven laps, the second-most in the race. Friesen and Sargeant each led four apiece, while Jones and Myatt Snider led one lap each.

Per Twitter, Noah Gragson had been battling a stomach virus all weekend long. When the Trucks were lined up for qualifying early Saturday morning, the second-year driver passed out on pit road.

Gragson was taken to the infield care center where the medical crew wouldn’t clear him for the race, though NASCAR did give a medical waiver for the playoffs. In steps Jones.

Unable to race today in Pocono due to Doctor not clearing me to race. If it were up to me, I’d be in my @safelite Tundra. I tried everything in my power to race. Thanks to everyone who supports me in my career. I feel like I’ve let everyone down. But respect NASCARs decision.

Jones’ last appearance in a Truck race was in 2016 when he finished fifth at Gateway Motorsports Park for KBM. Since the No. 18 didn’t turn a lap in qualifying, he had to start shotgun on the field.

“I didn’t get the first inkling that they might need me until after first Cup practice this morning,” Jones said following a second-place finish. “I kind of went at it after that, squeezed my way into Noah’s seat and got to drive it. It was a quick deal knowing I was going to drive it. The trucks are fun, fun races, they’re short, they’re quick and the [No.] 18 truck has been really fast all year.”

It didn’t take long for the 2015 series champion to crack the top 10. At the end of the first stage, Jones had raced up to fourth, while a few drivers decided to pit to get off sequence for the second stage, including team owner Busch. In the second stage, the No. 18 was scored in 18th, though he pitted with Busch coming to three laps to go in the stage, so he wouldn’t have to return to pit road the rest of the race.

During the sprint to the finish, Jones caught Busch with eight laps to go and nearly had the No. 51 cleared coming off the Tunnel Turn until a lapped car got in the way, allowing Busch to motor by on the outside. When the checkered flag flew, the No. 18 truck finished second, 1.4 seconds off the victory.

“It’s tough. Not only is it hopping into a truck I haven’t been in, I haven’t been in a truck in a long time,” Jones said of the challenges of driving in Trucks after not running a lap in practice or qualifying. “I haven’t drove the spec engines before, so there was a lot to learn off the bat. You have to sort out how the spec motors drive like, what the KBM trucks drive back now, I haven’t drove one in a while.

“It was actually pretty similar to what I remember from 2015. We worked on a lot of things and it was some of the same things we ran then, and the rules haven’t changed a whole lot other than the motors. It was a challenge, but a lot of familiarities.”

Jones has seven Truck victories to his name. However, he’s only competed in two races since winning the title in 2015, and he misses it.

“It’s kind of got a late model feel for NASCAR because the races are so quick,” he said. “I wish I could do it every once in a while, but it’s challenging to get the funding and the people that want to get behind you to run some one-off truck races, it’s not easy to get people to fund two or three races per year. It’s fun to do this when you can, even though the circumstances weren’t what you want, but it was  a lot of fun.”

Sargeant has a bunch of experience at Pocono Raceway in the ARCA Series, so it’s no surprise that he had a fast car on Saturday.

After qualifying fourth, Sargeant remained in the top five for much of the afternoon, despite pitting early to remain on the same strategy as Busch and Jones. The No. 25 truck spent four laps pacing the field.

Sargeant ended the first stage in third, picking up eight stage points. In stage two, he gave up the stage points to have a shot at the victory, getting out ahead of Busch and Jones. On the restart preceding the stage break, the No. 25 truck restarted as the leader and held off the No. 51 machine for a few laps.

Once Busch got by, Jones wasn’t far behind. However, over the final 20 laps off the race, Sargeant remained in third, despite being 17 seconds off the lead. He finished just ahead of Friesen, to pick up his first top-five finish in the Truck Series.

Checkered flag is out, Dalton Sargeant and the @PerformancePOil @GMSRacingLLC team finish in the 3rd position. Their best career finish in @NASCAR_Trucks today at @poconoraceway.

“It was definitely a great run,” Sargeant said after the race. “We’ve definitely needed some good momentum and this third place definitely helps out. We’re trying to make the Chase right now, and it looks like we need to win to get in, so this gives us some good momentum going into Michigan as well as Bristol. You can’t be too upset by getting beat by two Cup drivers.”

Prior to Saturday’s event, Sargeant had three prior top-10 finishes, with a best outing of sixth in the third race of the season at Las Vegas Motor Speedway. Now, 14 races into the season, and two races to go until the playoffs begin at Canadian Tire Motorsport Park, he sits 11 in points, 114 points behind Matt Crafton for the final playoff position.

The series heads to Michigan in two weeks where Sargeant has a pair of top-10 finishes in two ARCA starts at the venue.

.@Brett_Moffitt climbs back in. Bad vibration. The 16 guys believe they've fixed it. Heading back out to salvage some points. pic.twitter.com/U4xBpDvPPi

No. of rookies to finish in the top 10: 2; Dalton Sargeant finished third, Todd Gilliland finished seventh.

Rookie of the Race: Sargeant

I normally wouldn’t say this but I felt very confident in my opportunity to go to victory lane today. We were fastest yesterday in both race trim and qualifying trim during practice. Super bummed I cannot compete today. Thanks @safelite @ToyotaRacing, my team and the fans.

Just like old times. Hoping to get a great finish for everyone @KBMteam & @ToyotaRacing. Get well soon @NoahGragson Let’s do this!

Up Next: The Camping World Truck Series has a week off before heading to Michigan International Speedway in two weeks (Aug. 11). Darrell Wallace Jr. is the defending race winner, while Moffitt was the last series regular to win at the track in 2016. The green flag is slated to wave shortly after 1 p.m. ET on Fox Sports 1.