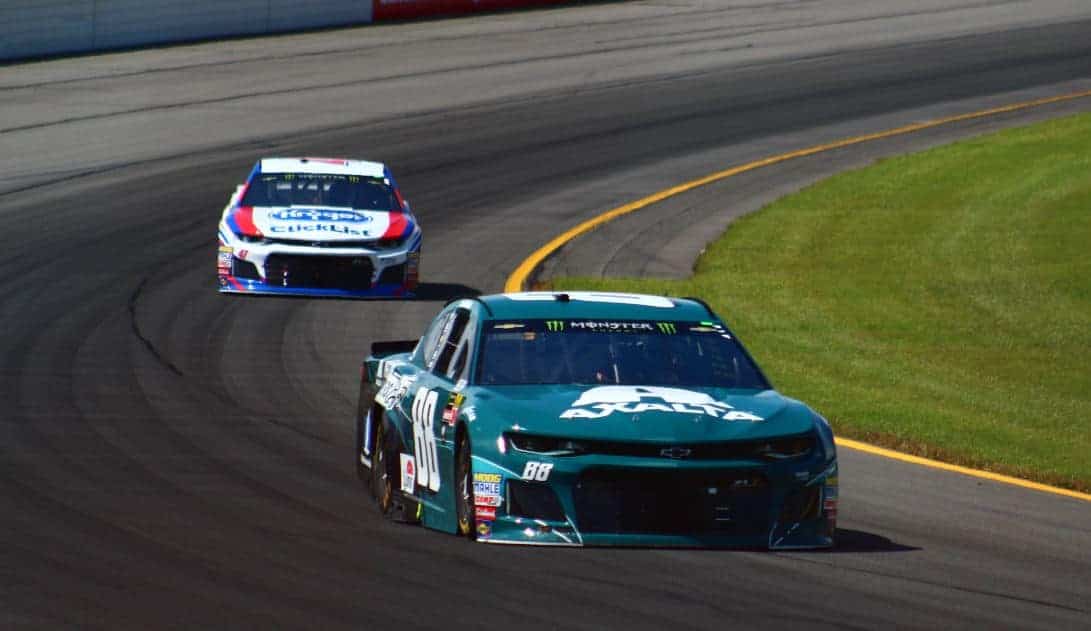 Flying the Philadelphia Eagles on the corner panels of his No. 88 Chevrolet in Pocono Raceway in Pennsylvania, the pressure was a little higher than usual for Alex Bowman.

Join that with his Hendrick Motorsports spot recently piloted by Dale Earnhardt Jr. and Sunday’s [July 29] Gander Outdoors 400 was full of eyeballs for Bowman.

Despite this, the 25-year-old charged forward in the 164-lap race, starting 10th and finishing ninth and fourth in both stages. From there, Bowman was in position for a top-five finish or better when he lined up fourth on the final restart with two laps to go.

“I wish we wouldn’t have gotten such a bad last restart,” he said. “Kyle [Busch] said to wait for a hand out the window and the hand never came. He kind of snookered me there.”

His first top five since Bristol in April, Sunday was Bowman’s best-ever Cup finish. And it came when car owner Rick Hendrick was on the watch in-person.

“We really struggled all week but the boss man showed up and magically we got better,” he joked. “I’m just glad we’re heading in the right direction.”

The power from Hendrick’s Chevrolets is what brought the pace for the four-car team, as teammate William Byron also scored a career-best finish in sixth while Chase Elliott was also top 10.

“We have these big long straightaways and the Hendrick engine shop doesn’t leave any horsepower on the table,” he said. “We were all pretty decent in the spring as well, so we made some adjustments, take who was best and go from there. It paid off.”

Unfortunately for the powerhouse, top-five speed hasn’t been ordinary in 2018. Only Bowman’s second this year, he is close to the playoffs bubble entering Sunday and will continue to race the line in the following five weeks.

“We were running sixth and then the caution came out… I was like, ‘[sighs], I would’ve been really happy with sixth if you told me that this morning,'” he said. “To pick up more spots there was really good.”

Though Bowman didn’t run third all day, he wasn’t surprised to have such result at Pocono. The triangular track has become “one of his favorites” in the Cup Series.

“I think we came here with opportunity to run well,” he said. “My pit crew killed it all day, really, really good. I wish we would’ve ended a little better, I wish that last restart could’ve gone our way. But it was a good solid effort.”