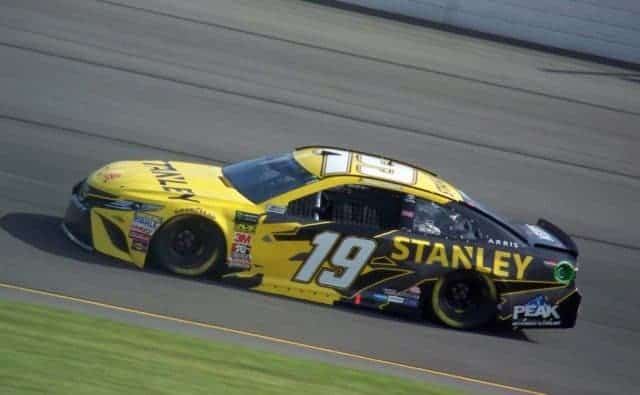 Daniel Suarez had a career-day on Sunday at Pocono Raceway, but it wasn’t enough to pick up his first Monster Energy NASCAR Cup Series checkered flag.

Suarez was awarded the pole on Saturday, after passing post-qualifying inspection, while the original front row, Kevin Harvick and Kyle Busch were sent to the back. The No. 19 remained out front for the opening 29 laps, the most laps he’s ever led in a single Cup race.

“It was close for sure. It hurts to be that close,” Suarez said after a runner-up finish. “I know that my race team is capable of making the playoffs and we’re working pretty hard for that. We know we have everything it takes to be in there. Haven’t done a good job in the last couple months, and we’re going to show in the next month or so that we are a race team capable of running up there.”

Suarez came into Pocono 20th on the playoff grid, 94 markers off the cut-line. However, he hadn’t finished in the top 10 since a third-place effort at Dover International Speedway nearly three months ago.

The No. 19 team stood out on Sunday among the four Joe Gibbs Racing Toyotas. Suarez was among the top five for most of the afternoon, besides getting off strategy at the end of the second stage, only to restart third for the final stage.

But it wasn’t a perfect day for Suarez.

“A little bit a long run speed, the front was giving up a little bit quicker than the [No.] 18. In the short run, I was better,” Suarez said of what was missing. “That’s part of racing… I was going to do anything I could. If I could have  made him loose, or gave him a little bump, I was going to do it. I never got close enough. The only time I was close enough, side-by-side on the last restart and when the [No.] 20 was on my inside, I had to worry about him and not worry about the 18.

“I just needed a little bit of help. I never even got close to a little bit of a push. The 20 did a really good job on the restart and I did a good job side-drafting the 18. He wanted to win, so instead of pushing me he went to the inside.”

It’s Suarez’s second podium finish of 2018, and third of his Cup career. Those three top-three efforts are his only top fives in 57 events in the No. 19 for JGR.

But from start to finish, the 2016 XFINITY Series champion believes it was the best Cup weekend of his career.

“Just the performance of the whole race and running up front, I think, yeah,” he said. “We lost a little bit of the top 10, top five car in the middle of the race and we made some adjustments and we got it back. I think for sure it was our best race of the year.”

Since his third-place finish at Dover in May, Suarez had a best outing of 11th at Chicagoland Speedway. With an average finish of 21.6 over the past nine races heading into Pocono, the runner-up effort helps the No. 19 team going forward

“It gives us good momentum,” he said. “My team really needed something like this to happen. Four or five more races ahead of us before the playoffs, so we’re going to try and exactly what we did this weekend to try to make it.

“I wish these kind of races happened two months ago, and it would have been a little bit easier. It happens sometimes. We’re still a new team and figuring some things out sometimes, and that’s part of racing.”

With fives races to go until the playoffs begin at Las Vegas Motor Speedway, Suarez is 20th in points, losing two points on the cut-line, which is held by Alex Bowman, who also had a career-best finish (third) on Sunday.

The series heads to Watkins Glen where Suarez picked up a stage victory in 2017, bringing home the No. 19 car in third.

Suarez did not “stand out” among the JGR teams on Sunday. He finished second to his teammate after being gifted with the pole and the first pit box. Then he wanted a “push” from another teammate to get the win. He is not the driver Kyle Busch is even with help from NASCAR and two late cautions. Maybe he will be some day, but today is not that day and overrating his losing effort does not change that. This is just more typical FS-BS.