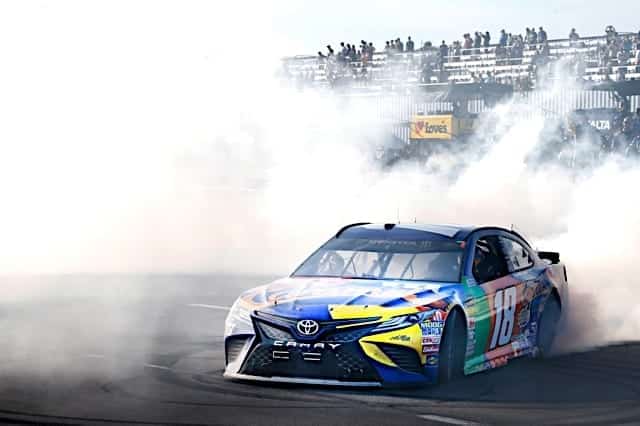 Before the July race in 2017, Kyle Busch had never won at the Pocono Raceway. On Sunday, Busch tallied his second victory at the Tricky Triangle and second straight in July. Busch rocketed away from teammates Daniel Suarez and Erik Jones on the final restart to earn his 49th career Monster Energy NASCAR Cup Series victory.

The victory tops off a solid weekend for Busch, who scored his 51st career Camping World Truck Series victory Saturday, tying NASCAR Hall of Famer Ron Hornaday Jr. on the all-time wins list in the series.

Suarez won the pole after Kevin Harvick and Busch’s times were disallowed after both failed inspection post-qualifying. Suarez kept the No. 19 up front all day long and even was in contention for the victory but came up short earning his best career finish.

Harvick had everything in line, to begin with, in order for him to inch closer to Busch in the record books but came up short after a miscue on pit road with teammate Aric Almirola. Harvick still secured a fourth-place finish, while Jones rounded out the top five. – Christian Koelle

For the two races leading into Iowa Speedway, Christopher Bell held off Cup regulars to pick up checkered flags. That should have made racing in corn country easy, right?

Wrong. After a rash of late-race cautions, Bell faded to fourth, after restarting in the lead. On the first of two overtime attempts, it was Bell, Justin Allgaier, Brandon Jones and Kyle Benjamin going four-wide into Turn 1. Allgaier prevailed as the leader. Bell was saved by yet another caution.

On what turned out to be the final restart of the race, Bell cleared Benjamin and Jones off Turn 2, nudging into the rear of Allgaier. When the white flag was waved, there was beating and banging for the victory at the short track. The No. 20 Toyota cleared the No. 7 Chevrolet in Turn 1 and Allgaier was never able to retaliate after what he thought was dirty racing.

Bell picked up his fourth victory of the season, and third in a row. He’s the first series regular to win three consecutive races since Dale Earnhardt Jr. did in 1999 en route to the championship.

Chastain’s fourth-place effort marks a career-high fifth top 10 of the season. He also increased his cushion on Michael Annett to 40 points, gaining the 10 points he lost from “overdriving” last week at New Hampshire. Annett has yet to score a top-10 finish this season in 19 races for JR Motorsports. – Dustin Albino

It took all five of his scheduled starts this season but Kyle Busch scored his 51st career Camping World Truck Series victory at Pocono Raceway Saturday afternoon, giving him a tie with Hall of Famer Ron Hornaday Jr. Starting on the pole, alongside teammate and rookie driver Todd Gilliland, Busch led a race-high 43 laps en route to his second win this season. Erik Jones, who stepped in last minute for an ill Noah Gragson, who wasn’t medically cleared to race, wound up second, followed by Dalton Sargeant, who scored a career-best finish. Stewart Friesen and Justin Haley rounded out the top five.

All of the top five and seven of the top-10 finishing spots when to Kyle Busch Motorsports and GMS Racing (including Friesen, whose team is aligned with GMS), two organizations that have a combined eight victories in 14 races this season.

With just two races remaining to set this year’s playoff field, very little is likely to change, barring a victory from a driver currently outside the top eight in the standings, though none of those below the cut line have consistently shown the speed needed to compete for a victory. Ben Rhodes is the current bubble driver but holds a substantial 85-point advantage over ninth-place Myatt Snider.

The Truck Series takes next weekend off before heading to Michigan International Speedway for the Corrigan Oil 200 on Saturday, Aug. 11.  – Beth Lunkenheimer

One thing has been firmly established, there will be no sweep of the Western Swing in NHRA this year as none of the drivers who won in Denver made it to the finals on the second stop of the Swing in Sonoma.

“We may be a part-time team but we come out to the track trying to win every race, and so far this year we have had a lot of success with that,” Alexander said. “My life has changed this year with how well we have been running, and the opportunity that Bob [Vandergriff] has given me to drive his racecar has been paramount in my career to take me to higher levels.”

Funny Car featured a clash of the titans as the last two class champions, Robert Hight and Ron Capps squared off. This round went to Hight, with a 3.984-second, 319.75 mph pass to Capps’ 4.077 seconds at 296.11 mph. Hight also defeated Tim Wilkerson, Bob Tasca III and Tommy Johnson Jr. en route to the finals.

Pro Stock came down to Jeg Coughlin Jr. versus Deric Kramer, with Coughlin’s 6.532 seconds at 212.16 mph good enough to beat Kramer’s 6.534 seconds at 210.54 mph. Coughlin got by Alex Laughlin, Tanner Gray and Greg Anderson to get to the final round matchup with Kramer.

Mid-Ohio was Alexander Rossi’s playground on Sunday afternoon. He was the only driver to use the two-stop strategy and it worked out to perfection. All he had to do was stretch the first stint a few laps longer than Will Power, Josef Newgarden and Scott Dixon and he was able to set sail with one less pit stop, slowing down his overall race time.

Championship leader, Dixon seemed to be on a run for the win after quickly moving from ninth to fifth in the opening laps. However, he was stuck behind the Penske drivers, who seemed to have the faster car based on raw pace.

Not a single caution flag flew the entire day, making the track position gained via strategy, and aggressive driving was the key to moving through the field. Sebastian Bourdais was the prime example. After starting 24th, some strong outside passes and a strong strategy, he was able to work his way to a sixth-place finish.

Now as the series heads off to Pocono, Dixon seems to have a good enough car to keep control, however, a race like today put Rossi right back into championship contention in just his third IndyCar season. – Drew Mongiello

The rain was coming, and both Zane Smith and Sheldon Creed knew it. Waging a ferocious battle one lap from the halfway point, ARCA points leader Creed charged to the front and was underneath teammate Smith through Turn 1, making contact and nearly spinning him out. Creed, however, backed out of the gas, scraping the wall and falling back to second while allowing Smith to gather his car and maintain the race lead. Three laps later, the rain was too much, and the race was called, giving Smith his fourth win of the season. Creed finished second, Chase Purdy third and Harrison Burton fourth, giving MDM Motorsports a sweep of the top 4 positions. Riley Herbst rounded out the top five.

Todd Gilliland dominated the early portions of Friday’s race, but as tire strategies cycled out, Creed and  Smith found themselves out front to wage their final battle to the rain. Noticeably missing from the top of the running order was polesitter Gus Dean, who saw all his momentum from his win at Elko gone inside of 20 laps after spinning on his own entering Turn 1 inside the first 10 laps, and suffering a blown tire a few laps later.

With his victory, Smith closed the gap to points leader Creed to 160 points. Despite struggling with axle issues early in the race, Natalie Decker’s struggles were less than those of Dean, allowing her to jump Dean back into sixth in the points. – Bryan Davis Keith

Just a few weeks ago, Lewis Hamilton, threw away a fantastic opportunity to win in Great Britain, losing to rival Sebastian Vettel. But at Vettel’s home track two weeks later, the Briton took advantage of an error by Vettel in the rain when the Ferrari driver spun off the track and into the wall, losing him the race. Hamilton went on to win.

This past weekend at the Hungaroring in Budapest, Hungary, Hamilton knew the Ferraris would be tough in a race that favored more of the Scuderia rather than the silver arrows. On Saturday qualifying, Hamilton drove the right line in a session that faced a rare rainy day. But he found the right line and took pole with Vettel no better than fourth on the grid for Sunday’s race.

For Hamilton, the victory puts him 24 points in front of Vettel headed into the summer break. The only thing scheduled right now is a Monday (July 30) test.

Hamilton looks ahead to the next race in Belgium on the last weekend in August to keep his momentum going forward. As for Vettel, he must hope that this mid-season revival of Hamilton, which occurred last season as well, is nothing but a one-season fluke that he can control. – Mark Gero

Last weekend was the Total 24 Hours of Spa, Round No. 2 of the Intercontinental GT Championship and the crown jewel of the Blancpain GT Series.  Heavily factory-supported efforts were all over the place.

Despite that fact, 24 hours of racing on a circuit as difficult as the Circuit de Spa-Francorchamps can result in anything happening.  This past weekend, it was Walkenhorst Racing’s No. 34 BMW M6 GT3 shared by BMW factory racers Tom Blomqvist and Philipp Eng, along with Norwegian racer Christian Krognes that took the overall win by 11 seconds over the similar ROWE Racing No. 99.  While this team does have factory support from BMW, this was effectively a one-off second entry from a family team.  Think of it like Furniture Row Racing in Cup right after Martin Truex Jr. joined the team.

Additionally, Friday saw SRO Motorsports Group CEO Stephane Ratel announce a new class, GT2, that will have a soft debut in 2019.  The idea behind the new class is to provide a higher-powered option that would fit in between GT3 and GT4 in cost.

The new cars will have somewhere between 640-700 horsepower, but limited aerodynamics and limited changes allowed.  Also, the cars can only be raced by amateur drivers.  The rollout will include a couple of races in 2019, followed by a full rollout in Asia, Europe and North America in 2020. – Phil Allaway