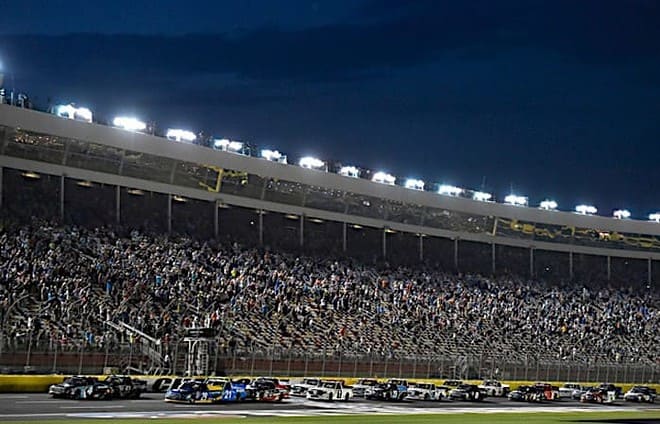 Beside the Rising Tide: Laughing at the Frozen Rain

One definition of “insanity” has been widely misattributed to Albert Einstein, Mark Twain and Ben Franklin. Whomever coined the definition, it is said that insanity is repeating the same failed behaviors over and over expecting a different result.

If that’s the case, one can only conclude the current Monster Energy NASCAR Cup Series schedule is insane. There is no shortage of changes to it both fans and participants would like to see tried. But to date, NASCAR is steadfast in refusing to even listen to any of them.

In this era of dwindling ticket sales and TV ratings that are tumbling like Mick Jagger’s dice, NASCAR seems to have no coherent plan moving forward to address the issues. They can only articulate what they have no plans on doing. Resuming early 2000s speak, they are once again clinging to an idea they are not going to react for the sake of reacting. At the end of the day, “it is what is.” That may be inarguable but where exactly is is and what the hell is it?

NASCAR was once big on explaining some of the controversial changes they made to the schedule were to “grow the sport.” It’s as if suddenly, stock car racing was some sort of new hybrid NGM tomato plant. Whatever that pathway was to “grow” the sport, it seems certain they have now wandered far from that path and off into the hinterland where once great enterprises head off to die.

One quirk in the schedule people often cite has to do with the two summertime Cup dates for Pocono being held so close together. The first Pocono race has been held as early as June 3 (this year, as a matter of fact) and the second race at the Pennsylvania triangle has been run as late as Aug. 7. This year, the two Pocono dates were June 3 and July 29, 56 days apart in the unlikely event I am doing the math correctly. For comparison’s sake, the two Dover Cup dates this year will run five months plus a day apart, a bit more manageable gap.

I’ve never really understood why, but I am told track owners/operators covet race dates after schools let out for the year and prior to school resuming for the autumn term. Both Pocono dates fall within that period, though it seems every year the kids go back to school earlier and get out later. When I was growing up, to the extent I did, I always assumed that the school term ended in mid-June and classes would resume on Tuesday after the Labor Day weekend. It seems counterintuitive that while today’s kids go to school longer, they are demonstrably stupider. (Though my generation once thought we’d cornered the market on abject stupidity.)

Certainly, the geography and demographics of Pocono’s location ought to be able to sell out (or at least approach selling out) two Cup dates a year. The track is about equidistant between New York City and Philadelphia, two huge TV markets separated by the densely populated state of New Jersey which has produced nothing of consequence since Bruce Springsteen.

As a resident of the northeast Megalopolis, I can say that media awareness of either, much less both, of the Pocono races is minimal at best. In many instances, sports anchors still refer to the Cup cars as “NASCARs”. That’s partially their fault for being lazy but also seems to indicate Pocono track management needs to do some more outreach as well. I mean, seriously, NASCARs? Isn’t that like calling a home run a “quadruple” because the batter advances one base beyond a triple?

Oddly enough, over the past couple weeks the Poconos Tourism folks have been on a saturation TV advertising blitz promoting travel to the region. But they’ve focused on stuff like historic railroads, whitewater rafting, hiking and, for whatever possible reason, coal mining. That’s without a single mention of the two events that annually draw more people to the Poconos than any other form of diversion and do so by a wide margin.

The New York tourism TV ads, by comparison, feature the Watkins Glen race prominently. I guess it’s time for Pocono management to go light a fire under the asses of their local chamber of commerce before a groundswell to strip Pocono of one of its race dates gains any more steam.

At least NASCAR has made it clear cutting Pocono back to one date won’t happen until at least 2020 due to existing contracts. In fact, if you look at the 2019 Cup schedule, it pretty much mirrors the 2018 one despite those pesky ratings and attendance issues this year. In fact, the theme for the 2019 NASCAR season could be summed up as “more of the same.” Don’t like stage racing? You’ll likely like it even less come next year. Not a fan of the current playoff style of determining the Cup champion? Well, it sucks to be you, doesn’t it? Next stop Ex-Fan-Ville, population: you. But stake your claim soon because the area is experiencing explosive growth.

So you thought it might be interesting to see the Cup or at least the XFINITY cars head off to a dirt track or two next year? Well, tell Tony Stewart not to wait by the phone, because when it doesn’t ring that’ll be NASCAR. How about a few summertime midweek primetime races? (It’s been awhile but it’s not like the notion is unprecedented. Before Winston took over as title sponsor, NASCAR often held three and four races a week, most of them on short tracks and a lot of them on dirt tracks.)

But it seems the TV network folks who broadcast the sport aren’t totally on board with the weeknight possibility. Just like there are existing contracts with the tracks that prevent any major upheaval of the schedule, in the TV contracts there’s this clause that says it’s their job to be worried half to death. Never mind that the status quo is not only failing, it’s failing rather spectacularly. If NASCAR Cup racing does, in fact, die during this downturn there will be no lack of fingerprints on the murder weapon.

One idea NASCAR has shown at least a modicum of interest in is running races at tracks that are traditionally ovals but in a road course style layout awkwardly labeled a ROVAL™. I can only surmise that such an event slips by under the radar of existing racetracks and TV network executives. The races, of course, are held at the same Bat-track on the same Bat-channel. The change is in the layout and not the location.

The problem is, to date, no such race has been attempted. Thus far, practice at the Charlotte Sort-Of-A-Road-Course has proven the format to be problematic, to be polite about it. That’s with far fewer cars actually running out on track than will happen during the full-scale event.

But even minus any evidence the concept is feasible, it seems to be spreading like a prairie fire. There was some talk this week the ROVAL experiment could be expanded to Pocono (as long as the coal miners sign off, of course) and possibly at Indianapolis.

It is hard to imagine any possible changes to the Brickyard 400 wouldn’t be an improvement. That race, even held on hallowed ground, is the ultimate example of NASCAR’s insane insistence of clutching to tradition like a toddler to his blanky despite overwhelming evidence the event is all sizzle and no steak. You’d have thought after the tire debacle in the 2008 Brickyard 400 that forced NASCAR to throw a competition caution every 10 laps the race would have been taken behind the stables and been dispatched with a single bullet, like a thoroughbred that had come up lame down the stretch.

However, the Indianapolis race is still on the schedule and this year was elevated to the final regular season race before the playoffs. No, the Brickyard hasn’t produced many, if any great races in 24 years. But surely, if NASCAR keeps plugging away at the same behavior, eventually it will yield an acceptable result. Meanwhile, good news for fans looking to go. Quality seats are still available and likely they still will be that Sunday morning.

The Formula One series suffered through their own tire debacle at Indy in 2005 and the event was quickly relegated to the scrap heap, a footnote to the series history after only six drivers agreed to start the 2005 event. It soldiered on for just two more runnings before the plug was pulled – neigh, yanked – with little fanfare.

Mr. Franklin, would you like to weigh in here?

Matt joined Frontstretch in 2007 after a decade of race-writing, paired with the first generation of racing internet sites like RaceComm and Racing One. Now semi-retired, he submits occasional special features while his retrospectives on drivers like Alan Kulwicki, Davey Allison, and other fallen NASCAR legends pop up every summer on Frontstretch. A motorcycle nut, look for the closest open road near you and you can catch him on the Harley during those bright, summer days in his beloved Pennsylvania.
Previous Who’s Hot & Who’s Not in NASCAR: Geometry is Difficult
Next 5 Points to Ponder: Scary Darrell Wallace Wreck Nothing New for Pocono