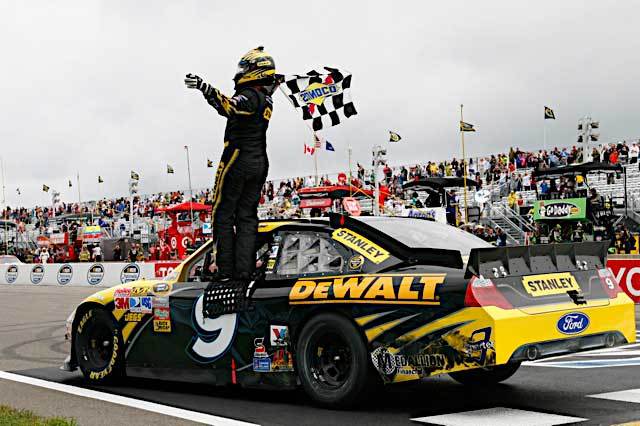 The 1999 race at Sonoma featured not just one, but two cars flipping through the air. First, Steve Park got turned around, slid backward through the grass and struck a barrier, sending the yellow No. 1 airborne, where it turned completely over before coming to rest on top of the barrier.  Later in the day, Ken Schrader had a nearly identical crash in the same turn as Park, except Schrader’s car flipped an extra half-turn and landed on its roof. That’s something you expect at Talladega, not at a road course. – Amy Henderson

As a near-native of Watkins Glen, I’ll go with Tim Richmond’s 1986 win in NASCAR’s return to the Finger Lakes region. It was during Richmond’s best and brightest period as a Cup driver, and it was thrilling to see NASCAR back at The Glen. I stood trackside in the esses as Richmond made the famous layout his own personal playground. The win was his fourth of the season, and he made it look almost easy as he held off challenges from future Hall of Famers like Dale Earnhardt and Darrell Waltrip. Not a showy victory, but certainly a significant one. – Mark Howell

They’re probably still arguing about the end of the Sonoma race in 1991. Ricky Rudd shoved Davey Allison aside to take the lead with a lap to go. While Rudd was given the white flag as the leader when he came out of corner 11 expecting to see the checkered flag, instead NASCAR gave him the black flag and moments later threw the checkered flag for Allison. Whatever the outcome, that race featured a hard wreck by Richard Petty. ESPN didn’t do too well documenting what happened but still, it’s a treat to see vintage racing footage of the King, Dave Marcis and the always grinning Davey Allison who couldn’t believe fate had allowed a win to fall into his lap.

The Fords were struggling that season and many believe NASCAR black-flagged Rudd to hand a win to Ford after rumors surfaced Ford was going to quit the sport.

Given what happened in 1992 that would have been a huge mistake. Waddell Wilson, Rudd’s crew chief, was clearly incensed with the turn of events. So much for NASCAR never taking a win away to avoid confusing the fans. My guess is this Sunday you’ll see at least one driver make a similar move and not earn a penalty for doing so. – Matt McLaughlin

We all have that one day we’d really like to forget, but nobody will let us live down. For an XFINITY Series rookie, that day happened on a national stage. And no matter what he would go on to do in his racing career, it was this crash that is still in the Watkins Glen highlight reel. Something on his Chevy broke, sending the kid hard into a Styrofoam-protected Armco barrier. A few scary moments later, the 24-year-old driver hopped onto the roof in a victory pose. He was a young, kind of goofy-looking kid whose name diehard series fans might have known, but for casual fans, it was more a matter of “who?” when the broadcast focused on him.

At the time, the victory pose seemed either supremely arrogant or an expression of disbelief at being alive.  It was the latter, and Jimmie Johnson has gone on to win seven Cup titles and has become one of the winningest drivers in series history. But he’ll never live down that day. — Amy Henderson

5. That goofy-looking kid gets the surprise of his life

Speaking of Johnson, road courses have never been a strong suit, but he has one win, at Sonoma in 2010. It’s how he got it that’s memorable because it was road-course specialist Marcos Ambrose’s race to lose, and Ambrose all but gift-wrapped the win for Johnson as he tried to save fuel, cutting the engine as he led under caution.

Ambrose had the win in hand until he shut off the car to save fuel and it wouldn’t refire in time to power him up a hill. It wasn’t that he was out of fuel; he mistimed his fuel-saving effort and by the time the car refired, second-place Johnson had made what turned out to be the winning pass. Ambrose finished sixth. It’s a toss-up which driver was more surprised. – Amy Henderson