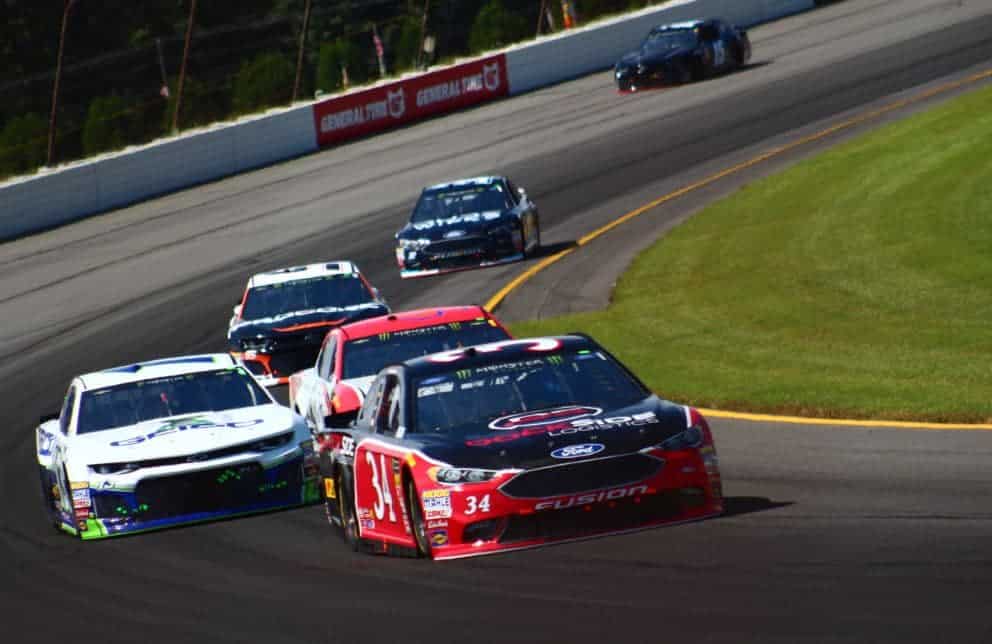 The two-day weekend got interesting fast for anyone who fielded a car for Sunday’s (July 29) Gander Outdoors 400 at Pocono Raceway. Once qualifying ended for the Monster Energy NASCAR Cup Series the starting grid nearly flipped by thirds.

Kevin Harvick and Kyle Busch were bumped from the front row after failing post-qualifying inspection and nearly a dozen cars followed them to the rear of the field. This development gave the underdogs a little leg up for the 164-lap race, given how only two of them were among the 13 who failed inspection.

A virtually inverted field made for an interesting first stage. A few teams, including StarCom Racing’s duo, simply chose to start in the rear to ensure the inevitable. That was how nine of the current playoff drivers would eventually pass in the opening few laps.

But the shake-up gave drivers who hung in there some season-high or career-high starts: Kyle Weatherman, Ty Dillon and Jeffrey Earnhardt. So, from the start, it was a nice performance for a lot of the underdogs.

As expected, the end wasn’t as bright but there were some who hung in there for solid days at the Tricky Triangle.

AJ Allmendinger led the way this weekend, starting and finishing 14th for JTG Daugherty Racing. A top-15 result may not be a head-turner but it was well-received from the No. 47 group. Last week at New Hampshire, Allmendinger wrecked out after just 19 laps, finishing worse than 30th for the fifth time in 2018.

Pocono proved a nice recovery, then. Allmendinger scored his fourth top-15 finish of the year and becomes the Frontstretch “Underdog of the Race” for the sixth time, more than any other driver.

Though Chris Buescher dropped out with a transmission failure in the final stage an underdog teammate duo still cracked the top 20. That was Front Row Motorsports, who saw solid runs from both David Ragan and Michael McDowell en route to top-20 finishes.

McDowell started 13th in his No. 34 Ford and maintained his track position to finish 16th. The run was his best since Texas in April and his first top 20 in eight races.

Ragan followed suit with his teammate, starting 16th and coming home with his seventh top-20 finish in 19th place. Unlike McDowell, however, Sunday was a continuation of solid performances for Ragan. He’s now earned three top 20s in the last four races, easily his best stretch of the season.

The two Ford drivers sit only three points apart in the standings in 26th and 28th, respectively in what’s been a growth year for Front Row Motorsports.

Ty Dillon was next best on the list, finishing 24th for Germain Racing. The Chevy driver has seen massive lows in 2018, currently running on just one top 20 since April. The late stages of Pocono were looking up for the No. 13 team, finally poised to get over that hump. But, like others, the overtime restart cost him.

Matt DiBenedetto was inside the top 20 when the final caution flew for Ricky Stenhouse Jr. and Aric Almirola in Turn 1. That, however, eventually led to a 27th-place run.

But the frustration didn’t end at the checkered flag. The No. 32 driver went after Almirola on the cool-down lap, spinning the Stewart-Haas Racing driver before approaching him on pit road. What happened between them remains unclear although a tweet by DiBenedetto claims he was forced to “check up” during the final restart.

Quietly behind him, JJ Yeley came home 28th in his third race with BK Racing’s No. 23. With Blake Jones and Spencer Gallagher making their debuts in the car Yeley offers a veteran status for the team’s rotating Toyota seat.

Jeffrey Earnhardt made his first start for Gaunt Brothers Racing and started a career-best 19th after the inspection penalties. The race, however, offered reality for the No. 96 as they fell to finish 29th.

The fourth-generation racer was followed by Kyle Weatherman in 31st, finishing ahead of veteran teammate Landon Cassill for the second time in three starts (Cassill finished 34th after engine issues). Reed Sorenson was 32nd for Premium Motorsports.

For Darrell Wallace Jr., a quiet day like those would have been appreciated… but it didn’t happen for the recently extended Richard Petty Motorsports driver after losing his brakes heading into the speedy Turn 1 on Sunday.

The mechanical mishap saw Wallace instinctively turn into the infield grass before shooting into the SAFER barrier. The angle resulted in an impact so hard that, despite being a right-side collision, ripped the left-side bodywork off his No. 43.

The rookie was shaken up after a timely exit from his car but was in good spirits after a visit to the medical center.

“They gave me an ultrasound, no twins or anything so I’m good,” Wallace said. “I didn’t know if I was going to remember it when I hit or not. Bit my cheek, banged my foot off the pedal. I’m OK though.”

Behind Wallace was Ross Chastain in 35th. The rookie was less than 24 hours removed from a top five in the XFINITY Series race at Iowa but struggled with engine problems nearly from the start on Sunday.

Bringing up the rear was BJ McLeod. He had just his second-ever Cup Series DNF in 16 starts, dropping out with an engine problem on Lap 77 driving Rick Ware’s No. 51 car.

As mentioned, Ross Chastain gave a small team, JD Motorsports, their best finish of the year, coming out of Saturday’s wild XFINITY Series finish fourth at Iowa Speedway. The result also surpassed his career-high marks of top 10s in a season, grabbing his fifth of 2018.

The Truck Series joined Cup at Pocono, racing their Gander Outdoors 150 on Saturday evening. Here, Stewart Friesen continued a strong 2018 campaign in his No. 52 Chevrolet, jumping to the fourth spot. Finally, Joe Nemechek had one of his best runs in recent years, finishing 10th for NEMCO Motorsports.

CATANZARETI: JOE NEMECHEK ON POCONO TOP 10: ‘I STILL LOVE THIS SO MUCH’

For all those asking…this is what really happened ?? thanks for clearing that up for everyone @DUDEwipes! We were just fulfilling the #DumpNRun32 https://t.co/IXu4vRsrKS

Overcame speeding penalties and brake issues at the end for a top 20. Proud of the effort @Team_FRM is putting in on both cars. Looking forward to the lefts and rights of @WGI

Good day for both cars @Team_FRM! We always want more but proud of the improvements in our organization and the results that are coming from all the hard work back at the shop and at the track. Big week for us coming up @WGI ! Nice to have a little momentum.

The underdogs are underdogs for a reason. They suck. Their only purpose in being in the race is to provide late-race cautions and to act as slow-moving chicanes for the leaders to work around.

My baseball team has never won a World Series. Same reason – they suck. Nobody writes a column about their suckage every damn week!