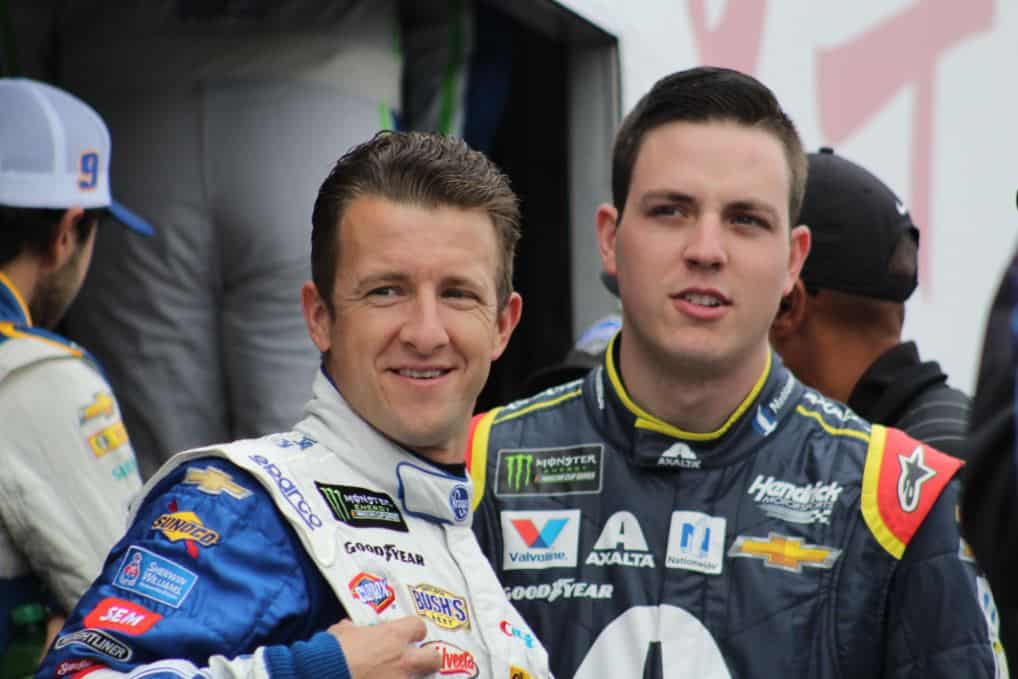 There are only five races left in the Monster Energy NASCAR Cup Series regular season, and we have seen only seven winners so far. With nine playoff spots still up for grabs, anyone in the top 30 in points who notches a win in the next five races will automatically earn a spot in the postseason. This week’s question: will anyone below the cut-line punch their way into the playoffs or will the Big Three of Kevin Harvick, Kyle Busch, and Martin Truex Jr hog all the wins the rest of the way?

Even if it only happens once, someone else is going to win before the playoffs start.

NASCAR is often a sport of streaks. The teams that start out hot often fade in the middle of the season, while someone else gets hot right around playoff time. Jimmie Johnson won three races in the first half of last season and wasn’t a championship factor the rest of the year. Meanwhile, Harvick did not win until Sonoma Raceway last season, and he ended up in the Championship 4.

The Big Three have pretty much clinched their way to Homestead-Miami Speedway, but they will cool off and not be as dominant at some point before then. Tons of talented drivers such as Brad Keselowski, Denny Hamlin, Kurt Busch and Kyle Larson have yet to win and probably will at some point. But each week when one of the Big Three wins, it opens up one more spot for someone to make it in on points, and each of those drivers is likely to make it in on their consistent finishes.

But looking below the point cutoff line, there are even more drivers who seem due to a win in the next few weeks.

The circuit heads to Watkins Glen International this weekend, and one name should come to everyone’s mind when you think of that track: A.J. Allmendinger. “The Dinger” is known for his road racing skills, winning at The Glen in 2014. He looked good at Sonoma earlier this season, winning a stage before a missed shift cut his day short. Allmendinger sits 23rd in the point standings and could easily win his way in this week.

The next race is at Michigan International Speedway, which is where Daniel Suarez has the potential to pick up his first career win like he did in the NASCAR XFINITY Series. Suarez just finished second this past week at Pocono Raceway, so he’s getting better and the No. 19 is showing speed. Suarez is currently 20th in points. If he doesn’t win at Michigan, then Suarez could win the following race at Bristol Motor Speedway, where he has shown talent in NXS.

A driver who is even better at Bristol is Ricky Stenhouse Jr, who trails bubble driver Alex Bowman by 56 points. He’s 16th in the standings, but Austin Dillon‘s win makes him the first driver below the line. Stenhouse has four career top-five finishes at Bristol, including two as runner-up.

Darlington Raceway is not likely to produce an underdog winner, but if it were, then Ryan Newman would be the guy to watch. Newman is tied for second among active drivers with seven top fives at the track. He sits 18th in points, but he is that sneaky guy who could steal a win at any of the five remaining races. Not to mention, he actually has wins at Michigan and Indianapolis Motor Speedway. the new regular-season finale.

The Brickyard produced a surprise winner in Kasey Kahne last year and might be the best bet to do so this year as well. It’s not likely, as he’s 27th in points, but Kahne could repeat. Jamie McMurray and Paul Menard have also previously won at Indianapolis, and both are probably in their best equipment since the years of their respective wins.

William Byron won at The Brickyard in NXS last year, and is getting better as he gets more experience in Cup — he just notched a career-best sixth at Pocono. Byron could pull a surprise win at any of the next five races, especially at Michigan and Bristol now that he has a Cup start at each track under his belt.

There is too much talent across the field in NASCAR for three drivers to continue to hog all of the wins. Someone new will win in the next five races and punch their ticket for the playoffs. -Michael Massie

It ain’t over until…Yeah, it’s over.

The playoff battle isn’t turning out to be much of a battle at all. With the distance between 16th and 17th in the points standings at 56 points, it would take one of two things: a win by someone from 17th on back or a complete meltdown from one of the drivers just inside the bubble.

I don’t foresee either taking place.

First of all, the last driver who is in via points as of now is Alex Bowman, who seems to have just recently begun to show his potential. He’s finished 11th or better in five of the past six races, including a career-best third at Pocono.

As a matter of fact, the lowest three drivers who would point their way in if the regular season were to end today are Hendrick Motorsports stars Bowman, Chase Elliott and seven-time champion Jimmie Johnson. With that entire team improving, the likelihood of leapfrogging any of them is almost nonexistent.

The drivers just below the cutoff line are Ricky Stenhouse Jr and Paul Menard. Stenhouse hasn’t finished in the top 15 in any of the past seven events so there is not a whole lot of momentum built up on that team.

Menard has shown about the same level of performance of late as Stenhouse, with only one top ten since the Coca-Cola 600 in May. So the odds are pretty good that he won’t see a top-16 spot in the standings again this year.

The faces in Victory Lane in 2018 have essentially been a picked off of a Mount Rushmore of dominant drivers. The quartet of Busch, Harvick, Truex and Clint Bowyer possess all but three of the checkered flags that have waved all season. Throw out the restrictor plate races and it’s been complete ownership.

Daniel Suarez made a valiant effort to win his way into the playoffs this weekend at Pocono Raceway. He just wasn’t able to overcome his powerhouse teammate Busch. He shouldn’t feel too upset. With the so called “Big Four” suffocating the competition, there isn’t much clean air left for anyone else.

I wouldn’t anticipate that changing either.

Suarez came as close to winning as anyone outside the cutoff will. There are no plate races to give the “also-rans” hope between now and the end of the regular season. Watkins Glen could be considered a wildcard, but many also thought that about Sonoma. Anyone remember the top three finishers from that race?

While it’s possible that someone could break through for an unexpected win in the next five weeks, I don’t see it happening. Barring a little rain or some gas mileage magic, your playoff contenders have already been determined.

Since NASCAR went to the “win and you’re in” system, there are exactly zero examples of a driver winning one of the last five races to earn a playoff spot that they wouldn’t have held based on the points requirements that were in place at the time —that trend will continue for 2018.

There just isn’t much room at the top these days. -Frank Velat