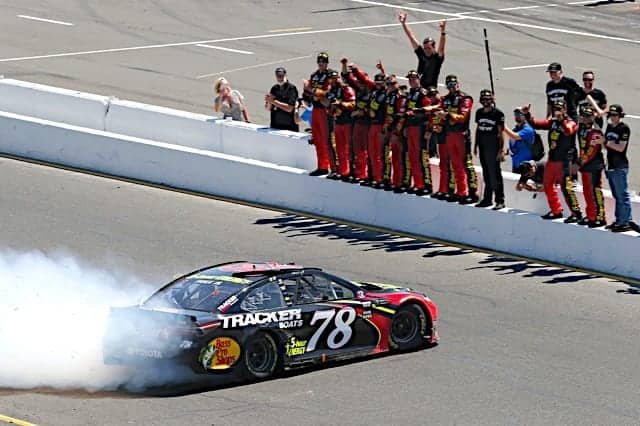 The Monster Energy NASCAR Cup Series goes road racing once again this weekend. The division makes its one and only stop at Watkins Glen International this Sunday (Aug. 5) for the Go Bowling at The Glen. The green flag flies at 3 p.m. ET on NBC.

Also, with only 0.1 points awarded for each lap led by a driver, the need for a dominator is less important when building a winning lineup. The 90-lap race will only have a total of 9.0 points up for grabs in this category. Take note when building your roster and focus on mid-pack drivers who can climb up toward the front on race day.

Truex is the most recent Watkins Glen winner. The victory last August was his first at the track and his second on a road course. Truex then picked up his third road course win just a few weeks ago at Sonoma Raceway. If he isn’t considered one already, this veteran is becoming an elite MENCS road course driver.

The defending champion has four wins this season but he has been overshadowed by the back-and-forth battle between Kevin Harvick and Kyle Busch. Don’t forget about him.

Busch secured his sixth win of the season last weekend at Pocono Raceway. He is now tied with Kevin Harvick at the top of the series win total. Busch is also the series points leader and has been the most consistent driver all season.

Busch has two career wins at Watkins Glen, the most recent coming back in 2013. In 13 starts, he has 11 top-10 finishes and should be expected to run near the front once again.

The 2018 season has been an underwhelming one for Keselowski. He has yet to reach Victory Lane 21 races into the season and has two DNFs for wrecks in the last four races. Although safely above the playoff cutline, a win would make things more comfortable for a No. 2 team in need of a boost.

In eight starts at the Watkins Glen track, Keselowski has five top-10 finishes. Even though he has not won at The Glen, he does have three runner-up results and one-third place finish.

Allmendinger’s lone Cup Series win came at Watkins Glen back in 2014. The sport’s premier road course expert has been great at the track over his career. In nine starts, Allmendinger has three top fives and six top 10s. He also has the best average finish here among all active drivers. At $10,000, he is much cheaper than other top-tier names and can fit alongside one of them in a lineup.

At times this season, Suarez has looked incredible. One of those instances came last weekend at Pocono. He started on the pole and held his own for a good portion of the first stage. Then, as the race went into overtime, Suarez started alongside Kyle Busch and gave him a run for his money. The resulting second-place finish was the best of the sophomore driver’s MENCS career.

In his one and only Watkins Glen start, Suarez finished third and led 14 of 90 laps. He is a great underdog pick for this race.

During his races in a part-time role with Roush Fenway Racing, Kenseth has not been competitive. However, that’s almost completely due to underperforming equipment. Luckily, when it comes to road courses, the outcome is transferred right back into the driver’s hands.

Even though it was with Joe Gibbs Racing last season, Kenseth was the runner-up in this event. He has always run well at Watkins Glen and is priced at a very friendly number this weekend.

McDowell is a cheap driver with decent upside. He has three straight top-20 finishes at Watkins Glen, including a 12th-place result last season. He is an underrated road course driver and could definitely post another quiet top 15 on Sunday. 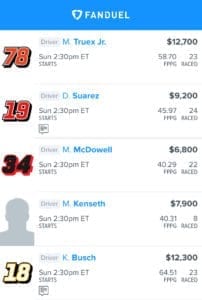