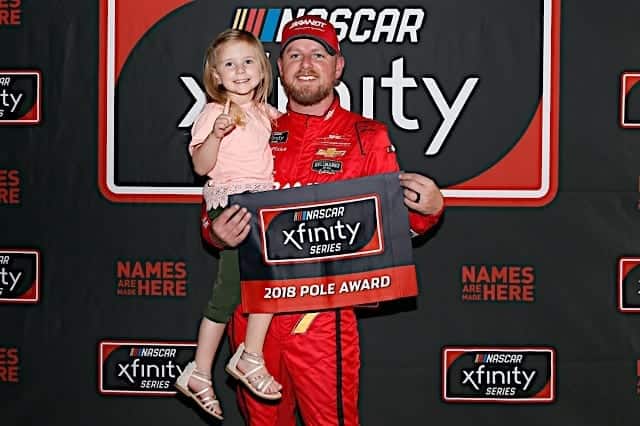 Justin Allgaier is having a career-year for JR Motorsports, and the best part about it for him is he’s doing it for his family.

Allgaier, 32, is in his eighth full-time season as a NASCAR XFINITY Series regular, though his third for JRM. Through 19 races this season, the No. 7 team has a pair of victories at Dover International Speedway and Iowa Speedway that have him at the forefront of many people’s minds as the championship favorite.

Along with his two victories, Allgaier has nine top-five finishes, including a runner-up to Christopher Bell last weekend in the annual return trip to Iowa. He has a total of 14 top 10s, which is on pace to eclipse last year’s mark of 17 and has led a series-high 496 laps, also a personal best.

But as the season progresses, the veteran driver believes the No. 7 team needs to be more consistent, as it has four finishes outside the top 30.

“[The] 2018 [season] has been great,” Allgaier told Frontstretch. “We’ve had some DNFs that are frustrating because we were running well when things went wrong. The win at Dover was a great win for us, being able to battle with a teammate coming to the checkers. Then, to go back to Iowa and really have such a strong day at Iowa, that was awesome. If we keep putting ourselves in good positions every week, we’ll have a great shot of going for a championship at the end of the year.

“It’s funny because last year we were good, not great. At a lot of places, we were consistent though. This year we’ve been a little bit less consistent, but have shown more speed and have been able to battle it out for wins and top fives at some of the mile-and-a-half tracks. We definitely still have to hit the execution button.”

Over the past season-and-a-half, Allgaier has racked up four of his seven career XFINITY victories, two of which his daughter, Harper, has been in attendance for.

Allgaier admitted that winning in June on Father’s Day at Iowa was a “cool moment” because Harper and his wife, Ashley, were waiting for him in Victory Lane. That’s something he wouldn’t have seen in his two-year Monster Energy NASCAR Cup Series stint, struggling on a weekly basis in 2014 and 2015 for HScott Motorsports. Ultimately, his family kept him going.

“My family has been the reason I’ve been in this sport for years and years,” Allgaier said. “My mom, dad and wife, now my daughter and in-laws, all of my family in general… I became somebody I didn’t want to be on the Cup side just because of the stress and struggle that we had. It was a very frustrating time of my career. I had great people around me, and I think that’s the hardest part.

“I became somebody that I didn’t want to be off the racetrack. I was frustrated and taking it out in situations that I didn’t need to be. My family suffered because of that, not because of anything bad, but just me not being me. That’s a hard part about this sport, you invest your whole life, so much time, your energy, everything about you is kind of dictated by what that box score sheet says and where you finished.”

Since Harper was introduced to the world nearly five years ago, Allgaier has faced a lot of change, however, starting his own family has helped the No. 7 driver stay more focus and want to win that much more for his family.

“It’s made me way better,” Allgaier said of how having a family has effected his performance. “I feel like the biggest thing I’ve struggled with is patience over the course of my racing career. Being a husband and a dad now, I’ve learned a lot about growing up. With racing, for whatever reason, a lot of racers tend to have different circumstances that make them more mature. For me, it was having a family. It’s made me more consistent, more mature and made me want to be better at my job when a lot of people think the other way — they think it’s going to slow them down.”

Allgaier mentioned that his wife attends roughly 95 percent of his races, while Harper attends 90 percent. His wins at ISM Raceway (March 2017) and Dover (May 2018) were two of the races she was not able to attend.

With many drivers having families over the past handful of years, Harper shows much interest in what her father does, even painting the helmet he wore for the seven playoff races last year, something she will also design this season.

“She definitely knows what’s going on,” Allgaier said. “When she comes to the racetrack, MRO [Motor Racing Outreach] has a community center that she goes to. She likes that part of it too, going to hang out with a bunch of her friends. She’s very prideful about what I do. She goes to school and she has to pick No. 7 for everything, and she loves [the No.] 7 and red because typically that’s my car color.”

But it might be the advice she gives him before every race that makes him more motivated to win.

“The biggest thing is before each race she tells me, ‘Good luck, you’ve got to win, don’t wreck and have fun and I love you.’ After the races are over, there’s been a few of them where she’s said, ‘It’s okay, daddy. I know you didn’t win, but you did your best.’ I want her to always have that instilled in her where you’ve got to go out and give 100 percent and never give up.”

With seven races remaining before the XFINITY playoffs begin at Richmond Raceway, Allgaier sits fifth in the championship standings, 52 markers behind Bell. The No. 7 team has eight playoff points, second most of all drivers.