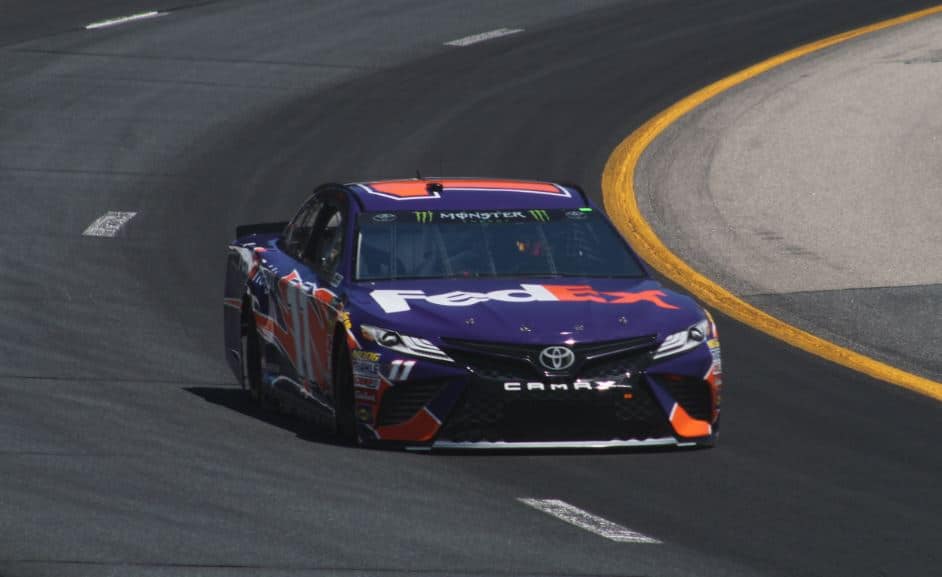 Denny Hamlin, when not staring at his dash clock (Photo: Zach Catanzareti)

The regular season now consists of five remaining races.  That’s right, you should congratulate yourself on making it through 21 Monster Energy NASCAR Cup races already this season — at times, it hasn’t been easy. Of course, making remarks like that would just seem to add to the notion that the season is too long and the series doesn’t need to visit some tracks twice, but none of that is going to change any time soon, especially with the current TV contracts.

So here we are, with the ‘Playoff’ field pretty much set.

But hey, there are still five races to go, and maybe something will happen.

Happiness Is…The Glen.  Consider this race Take-Two. What’s that supposed to mean? It means that the first road course race of the season, at Sonoma Raceway, came off like competition for Ambien. The drivers have gotten much better on tracks with both left and right turns, which certainly cuts down on silly mistakes that may lead to anything interesting happening.

But the drivers on the track at Sonoma also seemed to play friendly — too friendly.

Let’s try things against. This comment is not to advocate for everyone at Watkins Glen to get crazy and treat the race like carnival bumper cars, but perhaps seeing a driver or two get aggressive would be most welcome. This race positions itself as a kind of wildcard, and there must be, has to be, some pressure on a few drivers to snag a win.

There has to be a chance that someone like Denny Hamlin, who, when he isn’t looking at his dashboard clock, wakes up and realizes that he doesn’t have a win and needs to do something wild to grab some needed points and does something aggressive or idiotic. The road courses are built for these types of moments — aren’t they supposed to be the new short tracks?

So, yes! It’s great to be going back to a track where the drivers might bump, might get irately angry and might try something different to steal a win. And for those who are looking forward to the Roval at Charlotte Motor Speedway, may this show be a good harbinger.

Happiness Is…Gluck.  One of the writers who has become synonymous with NASCAR of late has been Jeff Gluck. This may seem counterintuitive to promote the competition, but when someone has put together a good piece of work, it should be noted.

This week, Gluck wrote about the divide in NASCAR. In some ways, we’ve already been watching this divide — one between old and new, one between how it is and how it should be. Gluck, however, sees the divide as one between those who see everything wrong with the sport and those who believe the sport is doing good stuff and on its way back. It’s the difference between needing glasses and looking through ones that are rose-colored.

Gluck isn’t wrong. The truth is, however, that both sides have something to hang their argument on. The sport IS hurting, but the sport is still rolling along. The sport DOES have leadership issues, but someone always emerges from a lacuna. The sport may not be what it was, but nothing is — it’s hard to put the genie back in the bottle.

Happiness Is…Financials.  Across the proverbial pond, the sport of Formula 1 is facing a problem for one of its teams. Force India was placed in administration a week ago, basically announcing to the world that they are not financially stable and require assistance. This does not compare with what is happening with BK Racing in the NASCAR Cup series, though there are certainly some parallels — as both owners played fast with money to field a team but didn’t ensure there was a foundation for the future.

Beside the difference in the monies involved — seriously, a Cup team can be bought for under $5 million?  That’s astounding, as Force India is worth roughly $250 million. But there are also politics involved in anything that occurs with the sale of Force India.

Should the organization just take on new backers, they might be able to get around some of the stipulations. But should someone like Lawrence Stroll, the Canadian billionaire, become majority owner, as might be expected, the team is then considered a new entity.

Thus, should the new owner desire to remain in their place in the pecking order, they need to get the agreement from the other teams on the grid. So far, McLaren, Williams and Renault have all stated that they will not sign off on a measure that would allow Force India to keep their place. The move is not one against FI, but rather against Mercedes and Ferrari — and that’s why F1 is its own drama series.

The hope is for the smaller teams to fight against what has been a growing concern of Ferrari and Mercedes basically taking over the series by treating some of the smaller teams as their second, and third, outfits. Red Bull already blatantly works such an arrangement, and the other two come close, but there is reason to believe that Force India may become even more intimately tied with Mercedes in this process. So yes, even while F1 is on break, they’re still a fun series to watch.

And supposedly the reason Force India was pushed over the brink was one of their drivers forcing (excuse the pun) the issue.

So Daniel is going to Renault replacing Carlos. Who’da thunk it?