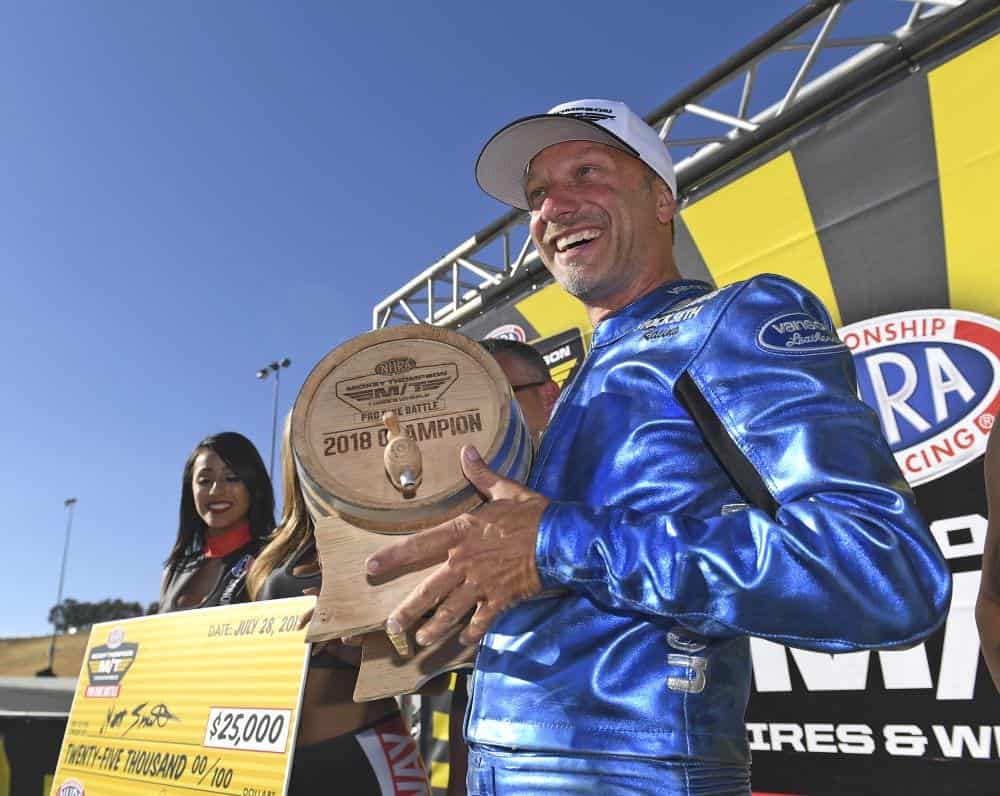 This past weekend in Sonoma, alongside the regular race, the Pro Stock Motorcycle class held its annual all-star event: the Mickey Thompson Tires Pro Bike Battle. The victor nets a $25,000 prize plus bragging rights for the year as the best of the best. You can bet all the riders in the class want that win on their resumé.

The top-eight riders in the class squared off during Saturday qualifying sessions in this race within a race. In the end, it came down to points leader Eddie Krawiec, who already has a championship, a U.S. Nationals win and Pro Bike Battle win on his record, versus Matt Smith, who has a championship and U.S. Nationals win, but was still missing the Pro Bike Battle trophy.

Smith completed his own sweep, besting Krawiec in the Pro Bike Battle final with a run of 6.793 seconds to the losing run at 6.764 seconds.

“To pull this off against a major factory team is amazing,” Smith said. “I’m happy for my team and for all the people who support us. I’m out here racing without a sponsor, so this means everything to me. We’re going to put this $25,000 to good use. It will help us a lot.”

NHRA also has an all-star race for Pro Stock and has had them in past years for the Nitro divisions. Since there are four separate classes, they have the ability to spread them out over the course of the season. It is a great concept that allowed each of them to stand on their own and shine, rather than having one class overshadow the others.

Pro Stock car was the first on deck, contesting the K&N Horsepower Challenge during the spring event in Las Vegas. This is the longest running bonus event in the series, dating back to 1985. Pro Stock Motorcycle takes its turn in Sonoma, and in prior years, the Nitro divisions contested their event, the Traxxas Nitro Shootout, during the marquee event of the season, the U.S. Nationals from Indianapolis.

Contesting the Nitro events during this weekend, which is an extended race weekend that runs qualifying through Sunday and eliminations on Monday, allowed the two classes, Top Fuel and Funny Car, to be contested on separate days, again allowing each to stand out on its own as well.

The NHRA has also found a way to make these “fun” events cost-effective, staging all of them as a “race within a race.” It pairs up the first and second round drivers during qualifying runs so that teams aren’t having to devote time and equipment to extra runs. The only teams that have to run outside of already scheduled runs are the two finalists, and at that point, with a big cash prize on the line that they have 50 percent odds of winning, no one seems to have a problem with the extra prep needed.

The cash is helpful, particularly for a team like Smith’s, which is looking hard for funding thanks to a lack of sponsorship. But at the end of the day, you can’t put too low of an emphasis on those bragging rights either.