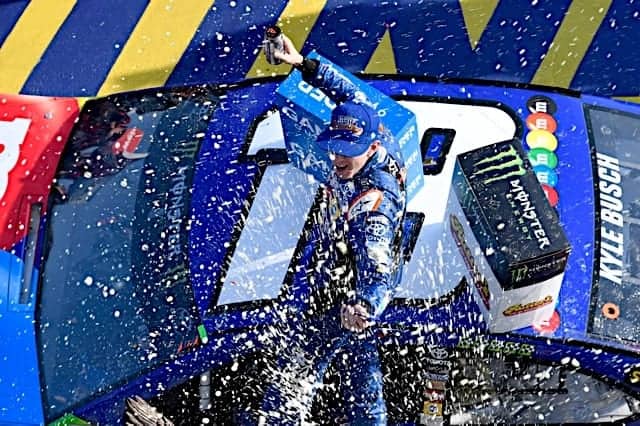 The Monster Energy NASCAR Cup Series returned to Pennsylvania’s Pocono Mountains and the three corners of Pocono Raceway for the second time in two months, and for a while, it seemed as though we would see a first-time winner at the Tricky Triangle for the third straight year (Chris Buescher 2016, Ryan Blaney 2017). But instead, Kyle Busch charged from the rear of the field to lead the final 50 laps and snag his sixth win of 2018.

The Gander Outdoors 400 went into overtime, featured a flurry of late restarts and a massive, scary Turn 1 wreck for Bubba Wallace. A number of drivers posted their season-best or career-best finish, and Frontstretch was there to cover all of the chaos.

This domination should continue next weekend at Watkins Glen. Busch has earned three poles, two wins and finished in the top 10 in 11 of his 13 starts at the New York road course.

Got us a couple new trophies to bring home! #WeekendSweep #18n18 pic.twitter.com/2vbgev4287

Harvick was anything but happy after failing pre-race inspection, and then a pit-road collision with teammate Aric Almirola late in the race ended his chance at taking the victory away from the No. 18. However, he did win stage two and finished fourth, his seventh top five in the past eight races and 16th of the season.

At Watkins Glen, he’s captured top-10 results in eight of his 17 career starts, with a victory in 2006. However, the past two years he finished 32nd and 17th.

But remember who finished second at Sonoma? He did.

It’s not very often you get race cars like that.. And most of the time you don’t even understand why they are so fast.. @KevinHarvick drove his butt off all weekend and put on a show! Just sucks we got the damage on pit road and had to go to the rear again! On to the Glen! ??

The 2004 champion hasn’t won yet this season, but he’s sitting at sixth in the standings right now, holding the eighth seed once the playoffs begin. The No. 41 Ford has finished in the top 10 the past three races, and he’s led laps in six of the past seven races. He’s pretty good at Watkins Glen, too, with 11 top-12 finishes in 17 career starts, including results of 11th or better the past five years.

Wow what a day! We don’t have much to show for, with finishing 9th, but we have a lot to be proud of. Team effort to overcome the adversity! No I in #TEAM pic.twitter.com/qHpeHcvFhY

His No. 78 Furniture Row Racing Toyota was uncharacteristically off on Sunday, never leading a lap and finishing 15th, interrupting a five-race streak of runs no worse than fourth.

Truex is the defending winner at Watkins Glen, where he has four top fives and seven top 10s in 12 career starts.

“We never could seem to get the handle on the Auto-Owners Insurance Toyota and it showed in where we finished."@MartinTruex_Jr Slips to 15th at Pocono Raceway » https://t.co/Ub3Nc7ovcJ#NASCAR #WeAreFurnitureRow pic.twitter.com/9qiNlEfGsU

Jones has finished seventh or better in five of the past six races, including Sunday’s fifth-place effort. The sophomore driver is locked into the playoffs thanks to his July win at Daytona and has logged 10 runs of 10th or better this season.

While he’s only raced at Watkins Glen once in the MENCS and twice in XFINITY, his results there aren’t bad: 12th, 10th and 10th.

Bowyer managed to run 11th on Sunday, which may not be spectacular, but it was a solid result, and he’s currently fifth in the standings, locked into the playoffs with multiple wins. His average finish at Watkins Glen is about 14th, but he’s finished better than he qualified for the past two years.

Not exactly the weekend I was hoping for. Had a fast car, missed on the finish. Glad @BubbaWallace is ok. Hard for anyone to watch something like that.

Elliott has finished in the top 10 in back-to-back races and led the Hendrick Motorsports resurgence with two stage wins and 10 top 10s. He holds 12th place in the standings at the moment.

His two previous Cup races at Watkins Glen have both ended in 13th, but he has a perfect six-for-six in recording top 10s at road courses in the XFINITY Series, and he won the 2013 Camping World Truck Series race at Canadian Tire Motorsport Park.

Larson and his Chip Ganassi Racing teammate Jamie McMurray have been consistently speedy, but they just haven’t been able to harness that speed consistently. Larson was 23rd on Sunday, following runs of 12th at New Hampshire and ninth at Kentucky.

He managed to avoid the terrible luck his teammates had last weekend to finish a decent 12th, and he finished eighth last year at Watkins Glen.

Long weekend for us. Will just have to keep working. Boy am I happy Bubba is okay. Saw a replay after the red flag and that was scary. Called him right after. He’s tough.

Newman has finished eighth, sixth and seventh in three of the past four races, but that momentum probably won’t continue to Watkins Glen. Newman has only three top 10s there and a best finish of 11th this decade.