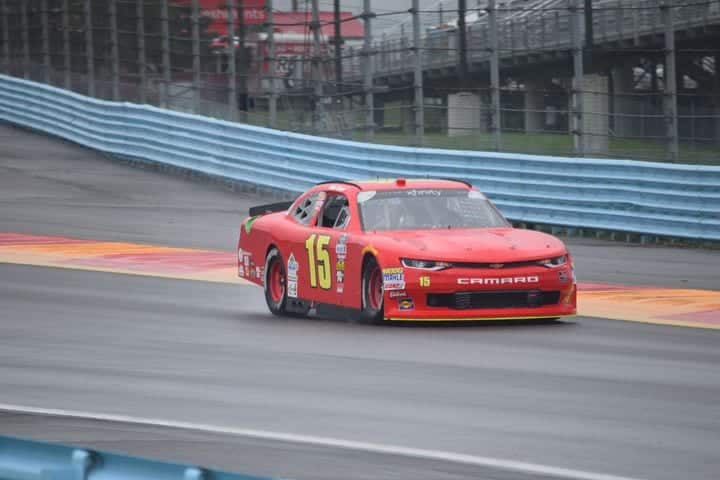 JD Motorsports’ Mike Skeen was fastest overall in XFINITY Series practice Friday afternoon (Aug. 3) at Watkins Glen International.  The Pirelli World Challenge veteran, who is making his XFINITY Series debut this weekend, turned in a lap at 95.620 mph in the wet during the second session. Due to the weather forecast for Saturday, the majority of the teams never ventured out onto the track at all.
Practice No. 1
The first practice session was held on a completely soaked track. As a result, very few of the teams present ventured out.
The only drivers willing to go out on-track were rookies (at Watkins Glen) for some of the biggest teams. Tyler Reddick was fastest with a lap of 89.513 mph, a lap that was 27 seconds slower than Joey Logano‘s pole lap from last year.
Reddick’s lap was two-tenths of a second faster than Roush Fenway Racing’s Austin Cindric. GMS Racing’s Justin Haley was third, nearly three seconds off the pace. Joe Gibbs Racing teammates Christopher Bell and Ryan Preece were fourth and fifth. Brandon Jones did venture on-course in his No. 19 Toyota, but pulled in without posting a time.
XFINITY SERIES ZIPPO 200 PRACTICE NO. 1 RESULTS
Practice No. 2
In Happy Hour, nine teams went out on-track while everyone else stayed in the garage. Many of the 43 drivers entered never even put on their fire suits all day.
Skeen was the seventh driver to go out on track, and he did not take long to put himself on top. On his one and only lap of the day, Skeen posted the fastest lap of the afternoon.
Skeen’s lap was more than a second faster than Kaz Grala. Unlike everyone else on the day, Grala actually did a short run of eight laps in his No. 61 Ford Mustang.
Alex Labbé was third quickest in his Chevrolet, sporting new sponsorship from Larue this weekend. Timmy Hill was fourth in his Dodge Challenger, while Joey Gase was fifth. The top five teams were separated by nearly four seconds.
The slowest driver in the session was Tommy Joe Martins in the No. 78 Toyota for BJ McLeod Motorsports, and there was a good reason for that. The team did not purchase rain tires, so Martins was forced to tiptoe around the wet 2.45-mile road course on slicks.
XFINITY SERIES ZIPPO 200 HAPPY HOUR RESULTS
With rare exception, those drivers who practiced Friday were all rookies. According to XFINITY Series Race Director Wayne Auton, all rookies had to set a time during one of today’s on-track sessions.
Next up for the XFINITY Series is qualifying, which is scheduled to start at 11:35 a.m. Saturday. It will air live on NBCSN.