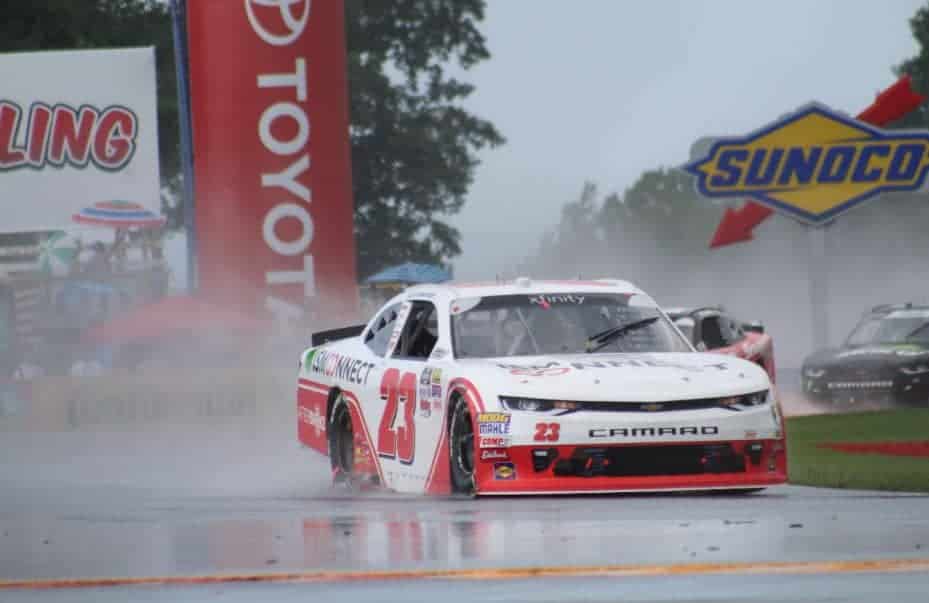 Saturday’s (Aug. 4) Zippo 200 at Watkins Glen International had it all for the drivers, teams and fans of the NASCAR XFINITY Series. And AJ Allmendinger was loving it all.

Starting the 82-lapper for GMS Racing, the road course veteran would make his first series start since 2013. And it started well, qualifying fourth in his No. 23 Chevrolet and maintaining a top-10 position in the opening stage.

And then the rain hit, and Allmendinger came alive.

“Once I saw the first two laps [in the rain], I said just let it rain,” Allmendinger said.

Indeed, the conditions saw the Monster Energy NASCAR Cup Series driver shine… even when the sky wasn’t. The Californian, on rain tires, restarted from the lead on lap 31 and took off with the top spot, eventually winning stage 2.

Unfortunately for Allmendinger, the rain quickly slowed and the track, instead, soaked up the summer heat to dry in the final stage. The teams all switched to dry tires and the normal racing resumed.

For Allmendinger, that’s how racing should be.

“If it rains, dries back out, you have to deal with the elements,” he said. “That’s what road racing is all about. I was at 80 percent there, I was starting to build confidence.”

The day took a hit when the No. 23 was penalized on pit road for pitting outside the box. The penalty was multiplied when Allmendinger was unsure of the penalty, confusion that led to a second penalty from NASCAR.

“Just a dumb mistake on my part,” he said. “You’re coming in for fuel, still damp on pit road, I rolled in and must’ve just touched a damn spot and slid more than I expected. I just didn’t know the rule, I thought it was just a drive-through. I didn’t realize I had to stop.”

From there on, it was all about a comeback. Allmendinger drove from 25th position and raced to the top five, eventually passing Justin Allgaier in the final corner to finish second.

“I knew then I was going to have to start ruffling some people up to drive up as hard as I could,” he said. “To get back to second, the [Team] Penske cars were the dominant cars. They looked like they could toy with us.”

In a rare XFINITY opportunity, Allmendinger appreciated the chance to race for a win in the series.

“It was fun. Thanks for GMS Racing,” he said. “I am thankful for the opportunity, I just trying to get everything I could for them.”