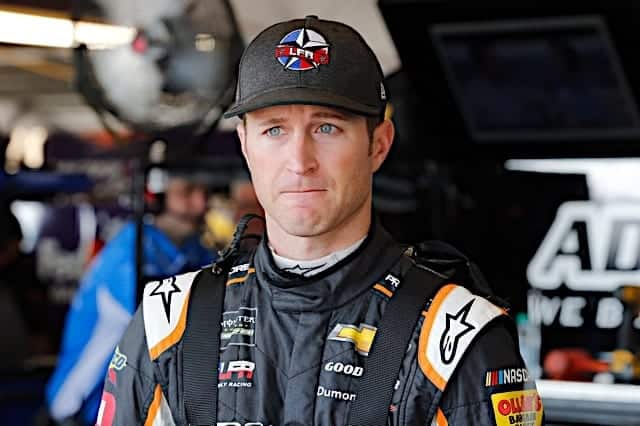 The last few weeks, Kasey Kahne has picked up the pace in his first year with Leavine Family Racing. That speed looks like it’s about to be rewarded with a contract extension.

Kahne, 38, told Frontstretch last weekend at Pocono Raceway he would like to return to the race team in 2019. Team owner, Bob Leavine, confirmed to Frontstretch on Saturday (Aug. 4) that LFR is looking to extend their relationship with Kahne.

“He’s done very well for us, in fact we’re working on his contract to extend it, so that’s how we feel about him,” Leavine said. “That’s our goal. You never know what’s going to happen, we’re working on it right now.

“We’ve already talked to him. He said he would like to come back, so that was cool because he fits. We’ve just been slow getting the people and putting the cars together that he deserves. There’s been times we’ve had good cars and we make terrible mistakes.”

2018 is Kahne’s first season with LFR, earning a best outing of fourth at Daytona in July. It’s been a bit of an up-and-down year, inconsistent performances leading to the ouster of crew chief Travis Mack after Michigan in June.

But under new head wrench Jon Leonard the No. 95 team has upped their performance. In the past few weeks, Kahne’s flashed more speed, earning three top-20 finishes the last six races. He’ll start a season-high 10th at Watkins Glen Sunday.

Leavine believes the veteran driver has helped the performance of the No. 95 Chevrolet.

“You can’t tell it on a week-by-week basis, but if you look back at the Daytona 500, we had a good car and we got killed by the [Nos.] 9 and 2,” he said. “We were running up front. Obviously, we had a good car at Daytona back in July and so that was good and we weren’t riding around. On the Monday race at Bristol, he qualified well, running eighth, and we had a power steering cap malfunction that put us out of the race. He has lifted our performance and the guys have responded.

“That’s the key attention to detail, urgency, do those things and it doesn’t hurt us to execute. We’ve got a good bunch of guys together, all we have to do is execute. They need to do what they know how to do.”

Leavine credits the improvements to Kahne’s experience; he’s driven in the Cup Series full-time since 2004. The veteran became available for 2018 around this time last year when Hendrick Motorsports effectively fired him from the No. 5 car. That name branding has also helped in the boardroom where LFR has picked up additional sponsorship.

“The sponsors we have and ones we’re talking to love Kasey,” he explained. “We even had one from another car call us on Thursday wanting to know if we’ve signed Kasey and if he’s coming back. That is a key. He will go and do anything we ask him to do, and that’s great.”

Ideally, Leavine would like the deal to be finalized within the next month so the team can work on a 2019 manufacturer. Over the past few months, there have been rumors circulating about LFR moving to Toyota next season and Leavine confirmed that’s likely true.

“What I can tell you is, we’re 90 percent sure, and we’ve notified RCR that we won’t be back, and then we’re investigating all the other possibilities on where to go,” Leavine said. “Have we visited those folks [Toyota]? Yes.

“Our goal with this team is to be competitive. Anybody who is in this garage wants to be competitive. Obviously, Toyota is a great organization. Furniture Row has done really well running Toyotas. Coach Gibbs has done tremendously well running Toyotas, so it obviously has to be something we look at and see if there is anything there that works out and is mutually beneficial.”

However, when it comes to Christopher Bell moving to Cup, it’s unlikely that it would be with LFR. Leavine claims the team is not yet ready to move to two cars.

“None, absolutely none,” Leavine said when asked about talks with Bell. “I don’t know if I would know him if I ran into him. I don’t know him… I don’t think we could ever count it out [moving to two cars]. But not next year – it’s way too soon.”

Bell did say earlier this weekend, responding to those same rumors he’s content to stay in the XFINITY Series next season.

Thank you for having Kasey on your team! Will stick with Kasey and your team! I think good thing are in your teams future! You will get there! Happy racing!