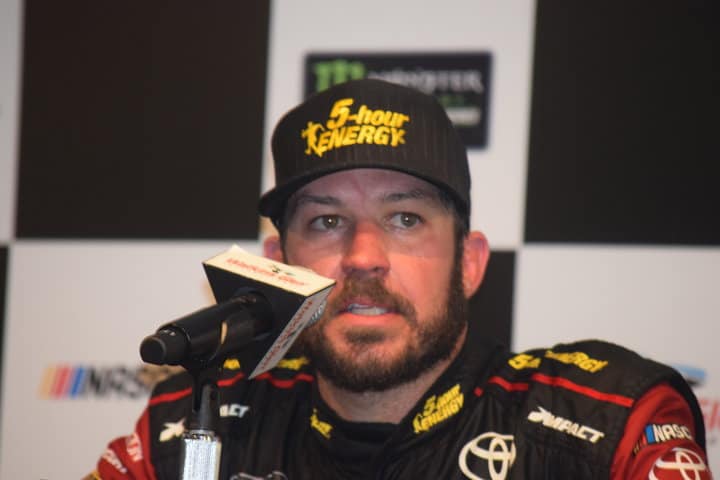 In 2017, Martin Truex Jr. was able to outfox the rest of the field at Watkins Glen by making his fuel last to the end to win.  On Sunday, he fell victim to a similar scenario, running out of fuel on the final lap and finishing second to Chase Elliott.

That said, Truex did have the better car at the end of the race.

“I had enough [left] to be faster than [Elliott], but not enough to pass him,” Truex said during his post-race press conference.  “I chased him down from quite a way back after the restart.  I took too long to get around [Kurt Busch].  He checked out on us and I tried all I could to chase him down.

“I got there with plenty of time, but every time I’d…get close enough to him to even think about making a move, I’d get sideways behind him,” Truex continued.  “[Elliott] did a good job of putting his car exactly where it needed to be and not making a mistake.”

In regards to actual fuel mileage, Truex indicated that crew chief Cole Pearn said on the radio that he was looking ok on fuel.  Pearn indicated that he thought Truex was better on fuel than Elliott.  However, the pace over the last 20 or so laps was quite brisk, making it impossible to save very much fuel.

Over the final 32 laps of the race, Elliott and Truex put a full 20 seconds on Erik Jones in third.  While the two leaders duked it out, Jones was content to save fuel and keep teammate Daniel Suárez behind him.  It was only in the final couple of laps that a charging Kyle Busch was able to usurp both of his teammates for third.

Despite the late fuel issues, Truex had an excellent day on Sunday.  Via pit strategy, Truex won Stage No. 1, claiming a playoff point for his trouble.  With a total of 16 stage points and 35 regular points, Truex’s total of 51 points was the best of any driver in Watkins Glen.  He gained eight points on points leader Kyle Busch and 20 on second-place Kevin Harvick.  Despite those gains, he’s still nearly a full race behind Harvick (with the gains from Sunday and Harvick’s penalty) and just over two races behind Busch in the standings.