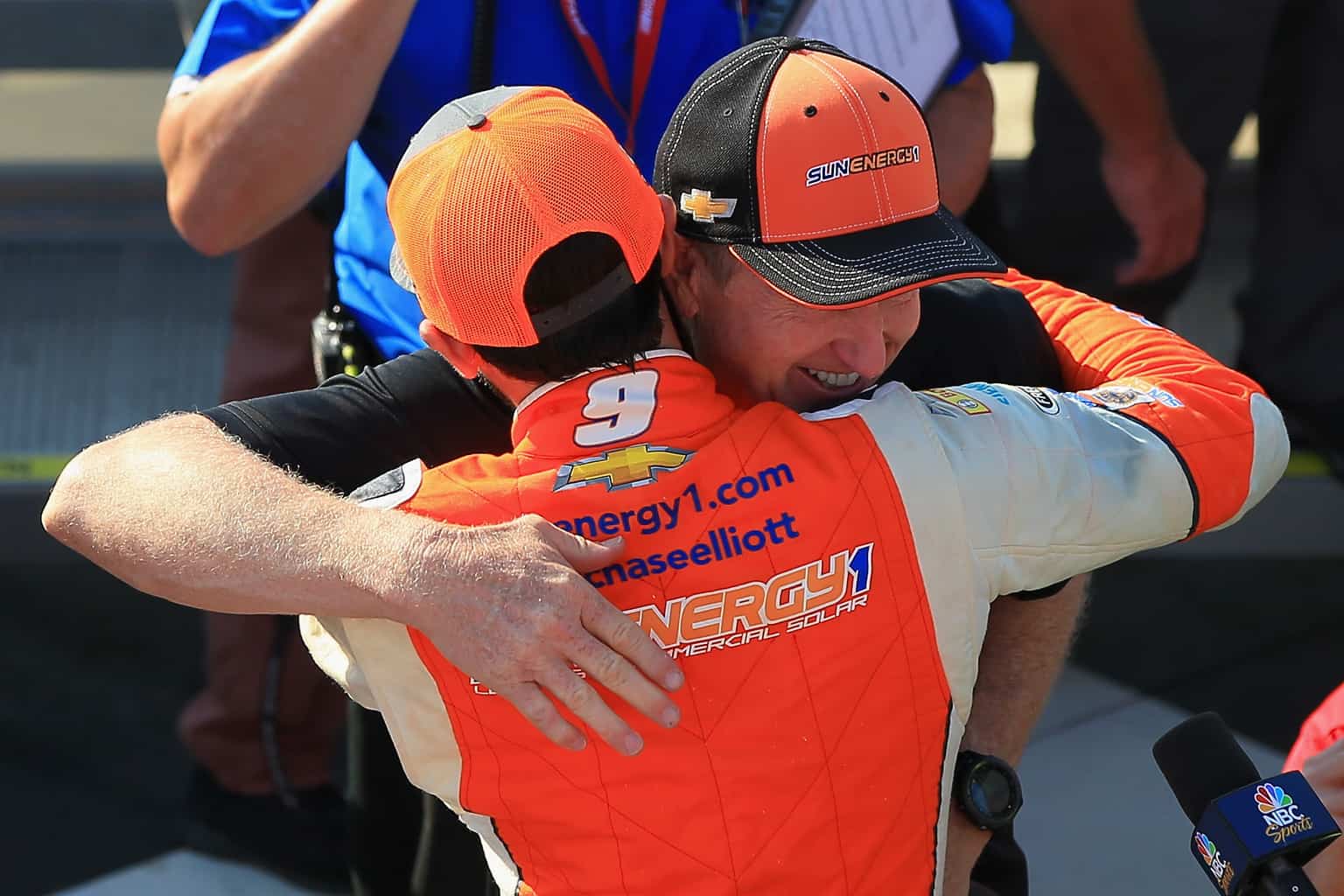 Finally. It’s not a surprise to me that the second Chase Elliott hit Victory Lane, his first Monster Energy NASCAR Cup Series win in the books, the first answer to how he felt was “relief.” After two-plus years of criticism, when turned into now as Elliott held off a determined Martin Truex Jr. Sunday (Aug. 5) at Watkins Glen International. Their mano-e-mano battle down the stretch, even though Truex ran out of fuel in the final corners, might be the best MENCS race we’ve seen this year.

It was a banner weekend for the Elliotts; father Bill announced he’ll come out of retirement to run at Road America later this month. But there was an eerie connection between the first wins of NASCAR’s 20-year Most Popular Driver and his son, likely the 2018 recipient of the award. Chase earned the win driving dad’s No. 9, doing it in his 99th start and accomplishing it on a road course.

Bill Elliott drove his No. 9 to victory in the season-ending race in 1983, doing so at a Riverside road course after eight runner-up finishes. Son Chase? He had eight runner-up efforts all his own, frustrating races like Dover last fall where defeat got snatched from the jaws of victory.

“You don’t think about these things until after the race,” Bill said after spotting for his son at the Glen. “It’s kind of weird.”

The coincidences also boil down to personality. Both men fought through hard times but kept their spirits up, knowing there was light at the end of the tunnel.

“I’ve left these races pretty down over the past couple years at times and had some great opportunities,” added Chase. “One thing I tried to beat in my head was that you don’t run second eight times by luck.  That’s the truth, you just don’t.  You have to realize that you were in those positions for a reason.”

That persistence has finally paid off. Now, the question is whether this win will springboard both Elliott and Chevrolet after a difficult start to the year. You couldn’t help but wonder as Jimmie Johnson pushed his teammate to Victory Lane whether a changing of the guard for this manufacturer was close at hand.

“Jimmie has been — like I said before, he’s been a hero of mine and he’s been a big supporter of mine, too, which is pretty neat,” Chase said. “He and I were out in Colorado at the same time last year and I had an opportunity to sit down with him and just talk about some of those disappointing days.  When you have a chance to talk to somebody like him about those days, that’s certainly a character-building moment.”

The question now is whether this moment, 10 years from now, will be historic in its own right for the son of a NASCAR Hall of Famer. – Tom Bowles

It’s rare that we get to see NASCAR race in the rain, but that’s exactly what happened on Saturday at the Glen. And it didn’t stop Joey Logano from picking up his third win in the last four races at the Glen.

Logano had the dominant, car leading a race-high 31 laps. However, the No. 22 car wasn’t the best in the rain, as he dropped in the field, while also staying out to win the first stage while others pitted prior to the green and white checkered flag. Then the rain came.

After a caution on lap 26 for Matt Tifft and Justin Haley, a rain cell that bellowed from 80 miles out closed in on the famed road course before dumping buckets. NASCAR called the teams to pit road, where they had to put on rain tires. But within eight laps and a 10-minute red flag, the rain was gone, and some teams decided to pit before the end of the stage to put on regular Goodyear tires.

That put Brad Keselowski out front, where the No. 12 led 26 laps. after duking it out with Logano for five circuits, Keselowski wheel-hopped into Turn 1 with three laps remaining, falling to 15th. He rebounded to 10th, while Logano cruised to the victory.

AJ Allmendinger took the checkered flag in the runner-up spot, while Justin Allgaier, Ryan Preece and Aric Almirola rounded out the top five.

The XFINITY Series heads to Mid-Ohio Sports Car Course next weekend, the second of three road course races this month. Prior to Sunday, Mid-Ohio in 2016 was the last time rain tires had seen action in NASCAR. – Dustin Albino

Camping World Truck Series: Back on Track in Michigan

After taking the weekend off while the Cup and XFINITY series raced at Watkins Glen, Truck Series drivers are back on track this weekend at Michigan International Speedway. The first of two races left to settle the 2018 playoff field, the series will run a pair of practice sessions on Friday before setting the field Saturday morning (Aug. 11). Coverage for the Corrigan Oil 200 will begin at 1 p.m. ET on FOX Sports 1.

Johnny Sauter, Brett Moffit, Noah Gragson and Justin Haley can all breathe a sigh of relief knowing they’re locked into the championship battle. The biggest danger for drivers currently inside the top eight is if a driver below the cut line finds Victory Lane. Ben Rhodes would be the first knocked out of the playoffs if done of those deeper in the standings wins this weekend. – Beth Lunkenheimer

Ron Capps won his second national event win of the year in the Funny Car final against Courtney Force, while Tanner Gray collected his division-leading fourth Wally of the season with a victory over Deric Kramer in the Pro Stock class.

After seven straight seasons racking up four victories or more, it’s hard to imagine seeing Brown struggling to get his Don Schumacher Racing dragster into the Winner’s Circle, but since winning this same event just one year ago, Brown has only managed to advance to the finals two previous times and only once this season.

And despite solidly placing himself in the Countdown, Brown hoped still hoped to end his winless drought before the final “regular season” race in four weeks at the U.S. Nationals.

Brown bested Pritchett with a stellar pass of 3.835 seconds at 322.84 mph to collect his 66th career NHRA victory and his 50th behind the wheel of a Top Fuel car, becoming the fourth Top Fuel driver in NHRA history with 50 career wins.

“It is no secret that we struggled at the beginning of the year,” said Brown. “Our main focus was one run at a time and to get better each time. But today all of the win lights turned on for our team and I couldn’t be so proud of all my guys for how persistent that they have been. It had been so long that I hadn’t even thought about winning 50 (races) but now that we got that win it is just a true blessing.”

After posting two straight final round losses against John Force Racing drivers, Ron Capps picked up a measure of revenge in Seattle by eliminating points leader and JFR driver Courtney Force in the Funny Car final for his second victory of the season.

Force was first off the line in the final round and led up to the 660-foot mark before the engine started dropping cylinders, allowing Capps to power to the finish line with a run of 4.033 seconds at 314.90 mph to collect his 60th career NHRA victory.

In Pro Stock, Tanner Gray beat out Deric Kramer after Kramer lit the red lamp in the final round, handing Gray his fourth victory of the season – tops among all the drivers in the Pro Stock class.

Gray won out over Fernando Cuadra, Jason Line and Vincent Nobile to move onto the money round for his first-ever final meeting against Kramer, who ended finishing runner-up for the second-straight race. – Pete McCole

Saturday’s Road America 120 for the IMSA Continental Tire SportsCar Challenge saw VOLT Racing’s Alan Brynjolfsson and Trent Hindman claim overall victory.  While it was a swell race for the duo in their Ford Mustang GT4, their victory was overshadowed by a nasty crash.

Just before the one-third mark of the race, TeamTGM’s Owen Trinkler got in the back of the lapped No. 9 Aston Martin driven by Craig Lyons in the dreaded Kink.  Lyons spun and backed hard into the wall in a massive hit.  You cannot tell in the live shot, but the initial hit moved the wall and allowed the Aston Martin to climb the barrier.  As a result, Lyons rolled his car multiple times.

Both Lyons and Ward were able to walk away from the incident.  Despite that fact, Lyons was transported to a local hospital in Sheboygan, Wis. for evaluation.  After a short visit, some good news was reported by IMSA.

Craig Lyons, driver of the No. 9 in the IMSA Continental Tire SportsCar Challenge, was transported to HSHS St. Nicholas Hospital. All tests came back negative and he has been released.

For Lyons, 2018 has been a tough season.  He, along with teammate Kris Wilson, started the season with Winward Racing/HTP Motorsport’s No. 3 Mercedes-AMG GT4.  Lyons crashed the Mercedes in the opening practice session at Daytona, which forced him to withdraw.  Lyons crashed early at Sebring in his only other start this season prior to Saturday. – Phil Allaway