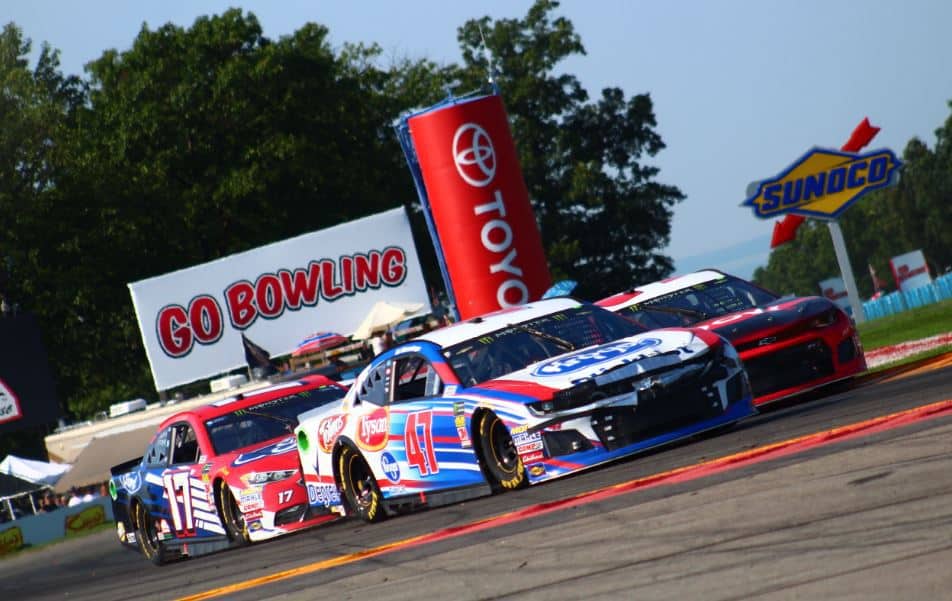 Watkins Glen International offered small teams perhaps their last chance to race for a win in the 2018 Monster Energy NASCAR Cup Series season. The plate tracks are done in this regular season, and after Sunday’s [Aug. 5] Go Bowling at The Glen, the road courses are, too.

And unfortunately for the underdogs, the 90-lapper did not give a ticket to the playoffs. Heck, it didn’t even give them a good day to look back on, as most of the small teams were outside the top 20, a common occurrence in 2018.

But it was a tough day for every one of the 37 starters Sunday. With multiple drivers going off track, receiving damage, being handed pit road penalties, it was a day that demanded near-perfection. Even the great and powerful (or at least that’s how he was perceived during Saturday practice) was seen falling with pit issues.

The Glen is known to be the faster of the road courses the Cup Series runs annually and it’s far from fictional. Denny Hamlin‘s pole speed of 125.534 mph was a whopping 31 mph quicker than the Sonoma Raceway pole speed (94.597 mph). The Glen is even quicker than the short track of Richmond Raceway, which posted a 123.859-mph pole speed this spring.

And with the physicality of the New York course punishing these cars more than ever, it’s always a tricky place to master. Piling on the difficulty with a two-day “condensed” weekend, and being adaptable was the name of the game on Sunday.

For the first time in our short history, we have a back-to-back winner of the Frontstretch “Underdog of the Race.” That title goes to AJ Allmendinger, who many would have put as the leading underdog Sunday at Watkins Glen.

And it’s more than just his road course talents that put him as a favorite. He won here in 2014 for his and JTG Daugherty Racing’s only Cup win but Sunday was expected to be his day for a good reason: The team has been the best underdog team in 2018.

Unfortunately, Sunday wasn’t a stellar day for Buescher, who finished 20th in his 100 Cup start. And it wasn’t a ton better for Allmendinger either. The No. 47 started a respectable eighth before suffering some front damage early. His Chevrolet was a little battered and bent for most of the day but he still managed another top 15 in the 15th spot.

The first of just three underdogs in the top 20, Michael McDowell was sandwiched between the JTG guys, finishing 18th. His No. 34 Front Row Motorsports Ford joined Allmendinger in the final round of qualifying Saturday, starting 12th, but dropped out of the top dozen early.

Still, the road racer managed to finish stage one in fourth spot before returning to the mid-pack area.

As mentioned, there were more than enough underdogs who were looking for more out of Sunday’s race.

Kasey Kahne made it three underdogs in the final round of qualifying, starting his Leavine Family Racing Chevrolet in the 10th spot. The effort was his best with LFR and his best at Watkins Glen since 2008.

But the speed didn’t carry over far, as the No. 95 suffered awkward nose damage in the opening laps. A stack-up incident bent the front splitter of Kahne’s Chevy vertical, which allowed for more-than-ideal air to get underneath the chassis. So, those straightaways weren’t easy pickings for passing. He finished 21st on the lead lap.

Ty Dillon had a quiet day for Germain Racing finishing 23rd while Parker Kligerman made his first start since Sonoma in June for Gaunt Brothers Racing. Coming home 24th, the run was his first lead-lap finish in 11 starts, dating back to Homestead of 2013.

Darrell Wallace Jr. got a grasp of Watkins Glen when he competed in the K&N Pro Series West race on Friday afternoon. Finishing sixth, Wallace may have had a few more laps under his belt but Sunday did not see a repeated run for the driver of the No. 43. He came home 25th, albeit a four-spot gain from his first road course start at Sonoma.

David Ragan was yet another victim of early race damage, which was good enough to punch a hole in the front nose of his No. 38 Ford. The back break cost Ragan and he only managed 26th.

Matt DiBenedetto finished the race in 33rd, however, took a break mid-race after an engine mishap on lap 54. He returned to the course soon after to see the checkered flag.

The Zippo 200 at The Glen ran rain or shine Saturday afternoon, as wet conditions brought the anticipated return of rain tires to the NASCAR XFINITY Series. And though it only lasted a few laps before Vinnie Miller brought out the red flag, it gave drivers, teams and fans a whole new show.

AJ Allmendinger showed his skills once the rain hit, driving away with the lead to win stage two for GMS Racing. His first series start in five years ended with a colorful comeback to finish second.

Jeremy Clements was seen flirting with the top 10 in his No. 51 family team and was looking for a return to Victory Lane on a road course, winning his only race at Road America last summer. Finishing seventh in stage one, the day took a downward turn on the final run as Clements fell to finish 14th.

Kaz Grala made Fury Race Cars’ first road course start in his No. 61 and stayed consistent in the top 15. Earning stage points in stage one, Grala finished 15th, the team’s sixth top-15 finish in eight starts.

My bad Parker wasn’t a clean move on my part but wasn’t intentional was trying to run a big diamond and caught your rr. My bad you drive your ass off a did a great job. https://t.co/SP9FW4OKJd

Damn. We had a FAST @RickWareRacing Jacob Companies / Marriott Drywall Ford Fusion today. A bad fuel injector took us out of the race while racing for a top 25. Thanks to Rick for the opportunity. I hope to be back in the #51 in the Cup Series soon! pic.twitter.com/mxG5oGiIRE

Man!!!! How about the big homie getting that DUBBBB!!!

Congrats @chaseelliott! Pumped for you brotha!

.@KazGrala in the middle of a fantastic battle in the wet at @WGI #Zippo200 #NASCAR @FuryRaceCars pic.twitter.com/RxHlTi21a4

Long day…we broke today. But glad to see @chaseelliott get his first win!! Always love seeing first time winners. Not to sound selfish but it will also help with my All Star fan vote chances next year ?