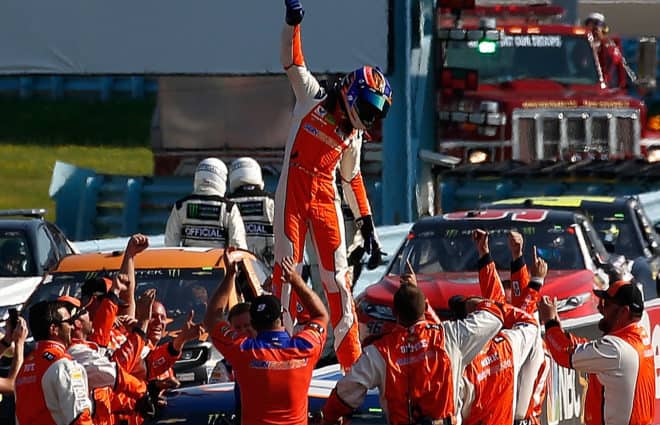 Thinkin’ Out Loud: Chase Elliott Cranks Up the Siren Again

After almost three years of trying, and eight near misses, Chase Elliott has finally scored his maiden win in the Cup series. Elliott won the second stage and the race while Martin Truex Jr. grabbed the win in the first stage. William Byron crossed the finish line in eighth to claim the Rookie of the Race.

Kyle Busch took the lead at the beginning of stage two but lost it three laps into the stage when Elliott passed him for the second on-track pass for the lead. Elliott led the rest of stage two to score his third stage win of the season. Busch regained the lead at the beginning of the final stage. Matt DiBenedetto‘s motor blew on lap 54, which opened a fuel window to the finish of the race.

As the teams pitted Busch’s fueler had an issue with his first dump can and did not get the car full of gas. Busch had to come back to pit lane and top off which relegated him to the back of the lead lap cars. Elliott took the lead on the restart and proceeded to pull away from the field with Truex. They both saved fuel for part of the run and turned up the wick as the laps wound down. Busch knifed his way through the field but, without a caution, he was too far behind the front two when he got to the third position.

Truex closed on Elliott with two laps remaining but made a mistake in the bus stop to give a cushion to the leader. Elliott returned the favor in Turn 1 of the final lap, but Truex was not quite close enough to take advantage. Two turns from the finish Truex ran out of gas and Elliott cruised to his first career win. Elliott ran out of gas on the cool-down lap.

Chevrolet teams, outside of Kyle Larson‘s, have been struggling with the new Camaro body style. Hendrick Motorsports has been surprisingly lackluster this year but is reported to have found something in the chassis department that should be giving the organization some new speed. With Elliott scoring this win and his teammates having respectable runs, the bowtie camp has to be feeling confident going forward. Elliott especially has to feel good going to Michigan, where he has multiple second-place runs.

Kasey Kahne is going to be staying at Leavine Family Racing based on comments from team owner Bob Leavine to Frontstretch’s Dustin Albino. Leavine feels like Kahne is a good fit for the organization and wants to return next year. He also confirmed that the team has notified Richard Childress Racing that they will not continue their alliance next season. The rumors currently circulating are that LFR will move to Toyota for 2019 and beyond.

Teams have been changing their paint schemes over the past few weeks to include dark patches on wheel openings and rear corners of the cars. The intention appears to be an effort to confuse the Optical Scanning System (OSS) that is utilized for technical inspection. NASCAR sent out a memo this week warning teams that any submitted paint schemes that appear to have design elements intended to confuse the system will be rejected. Also, any schemes previously approved that are deemed to have such elements will be subjected to developer spray which helps enhance the definition of surfaces. Modifications made to previously approved schemes will be removed at the track. It is hard to imagine Smokey Yunick and Junior Johnson having to be subjected to developer spray.

Social media blew up this weekend when it was announced that Bill Elliott will be running the XFINITY race at Road America in three weeks. The 62-year-old has been running some nostalgia races with Ray Evernham lately. Not sure if that was in anticipation of this announcement or if this opportunity came about thanks to the success he has realized in the nostalgia events. GMS is putting several different drivers in the No. 23 this season and this is going to be an interesting one for sure.

Clay Campbell, president of Martinsville Speedway said in a Twitter video that “no one wants a night race here more than I do.” It appears that it will be 2020 at the earliest that it will happen since 2019’s schedule has already been released. The line that fans were fed when lights were installed at Martinsville was that they were for insurance against races running long. As most people with a brain thought, that was not true and a night race is coming. For fans that love night racing, it is a big deal, and for fans who hate night racing, it is another punch to the gut.

Elliott’s win was the 250th for HMS and ended a 37 race winless streak. 17 different drivers have won in HMS cars. For those not familiar with the story, the first was Geoffrey Bodine in Martinsville in 1984. Jeff Gordon won numbers 50 and 100.

Kyle Busch had an incredibly fast car Sunday in Watkins Glen. He had the opportunity to show it off leading the race and also carving through the field after a problem with a dump can. Busch made it to third place but the leaders were too far away to run them down. If he could have caught a caution when he made it to the top five, he just might have rebounded all the way to the win.

Joey Logano won the XFINITY race on Saturday and was feeling confident heading into Sunday. Unfortunately for him, he ran into a car very early in the race which led to a damaged oil cooler. When Logano came to the pits he was put on the five-minute damage clock. His crew chief Todd Gordon took the car to the garage to try and repair the cooler. The NASCAR rule book states that a car taken to the garage while on the clock is retired from the race. While Logano would have been multiple laps down if they had fixed the cooler, it was still upsetting that his day was cut short over a misunderstanding about the rules.

Daniel Suarez came home in fourth place and is continuing to run closer to the front. He’s picking Kyle Busch’s brain about how to race with the front of the pack and ultimately win races. Suarez continues to improve as he returns to tracks and learns what he wants in his cars. It will not be a surprise to see him be the next young driver to break into the win column.

Another member of the new guard scored a top 10 at Watkins Glen as William Byron came home in the eighth position. Similar to Suarez and Elliott, Byron is learning how to run faster in Cup cars and put whole races together. With Darian Grubb making his typical gambling calls on the top of the box it will also be sooner rather than later before Byron visits Victory Lane.

Elliott becomes the 191st driver in the history of NASCAR to win a race.

On the all-time list, Elliott is tied with 62 other drivers who have one victory in their career.

In the runner-up spot was Martin Truex Jr. who notched his eighth top-two finish of the season.

Truex has come home in the top two twice in his career, the last two times he’s raced there.

On the All-Time list, Truex has 16 second-place finishes which tie him for 53rd with Fred Lorenzen.

Rounding out the podium was Kyle Busch who landed his 13th top three finish of the season.

This was Busch’s fifth career podium run at Watkins Glen.

Busch has 122 career top threes which rank him 15th on the all-time list.

William Byron continued his hot streak of Rookie of the Race wins with his fourth straight.

For the year, Byron’s 14 awards are six more than Darrell Wallace Jr’s eight.

Austin Dillon, Kevin Harvick, Martin Truex Jr., Clint Bowyer, Kyle Busch, Joey Logano, Erik Jones and Chase Elliott are the eight race winners in 22 races of 2018. At this point it is impossible for there to be more than 16 unique winners in the regular season, so all winners are locked into the playoffs, assuming they attempt the remaining races in the regular season. The drivers who would qualify for the playoffs and their associated playoff points (race winners are bolded):

A first-time win is always enjoyable and when it is a very popular driver it gets an extraordinary amount of attention. While that excitement was high, the race was quite a snoozer for the majority of the event. Two on-track passes for the lead and large gaps between the leader and second for much of the race simply didn’t provide much excitement. We’ll give this one three cold Hop Warriors from Rooster Fish Brewing.

Trip number two to the Irish Hills of Michigan is next weekend. Race coverage begins at 2:30 p.m. ET on NBCSN. The action can also be streamed on the NBC Sports app. If you want to listen to the race you can tune to your local MRN affiliate, www.motorracingnetwork.com or SiriusXM NASCAR Channel 90.

What is it that Mike Neff doesn’t do? The writer, radio contributor and racetrack announcer coordinates the site’s local short track coverage, hitting up Saturday Night Specials across the country while tracking the sport’s future racing stars. The writer for our signature Cup post-race column, Thinkin’ Out Loud (Mondays) also sits down with Cup crew chiefs to talk shop every Friday with Tech Talk. Mike announces several shows each year for the Good Guys Rod and Custom Association. He also pops up everywhere from PRN Pit Reporters and the Press Box with Alan Smothers to SIRIUS XM Radio. He has announced at tracks all over the Southeast, starting at Millbridge Speedway. He's also announced at East Lincoln Speedway, Concord Speedway, Tri-County Speedway, Caraway Speedway, and Charlotte Motor Speedway.
@MNeffShortTrack
Previous Martin Truex Jr. Experiences the Downside of Fuel Mileage at Watkins Glen
Next Pace Laps: Chase Elliott’s History in the Making