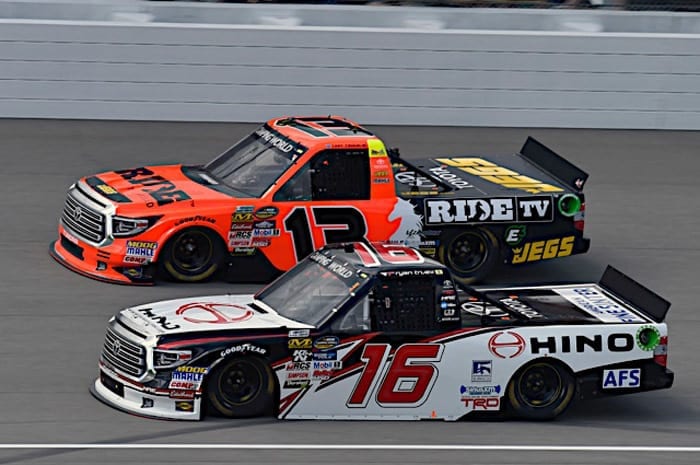 For the Camping World Truck Series, there are 34 trucks entered in Saturday’s Corrigan Oil 200 at Michigan International Speedway.  As a result, two trucks will go home without having the opportunity to race.

There are a number of changes for this weekend.  Kyle Busch has reached the maximum number of starts allowed for a Monster Energy NASCAR Cup Series regular (five) after winning at Pocono.  Spencer Davis will drive in his place in the No. 51 Toyota.  Noah Gragson will be back in the No. 18 Toyota after being cleared to return by NASCAR.  Gragson was sick in Pocono and all but passed out in his truck prior to qualifying.  Erik Jones got the last-minute call to drive and finished second.

For this weekend, Peck will drive the No. 15 Chevrolet for Premium Motorsports, replacing Reed Sorenson.  Sorenson moves over to the Beaver Motorsports No. 50 Chevrolet, replacing Ray Ciccarelli.

At DGR-CROSLEY, team co-owner Bo LeMastus will move from the No. 54 to the No. 17 this weekend.  The move allows for Matt Mills to drive the No. 54 with sponsorship from JF Electric in addition to CROSLEY Brands.

Finally, Tate Fogleman returns to Young’s Motorsports to drive the No. 20 Chevrolet, replacing Tanner Thorson.  Fogleman has showed speed, but has had no luck.