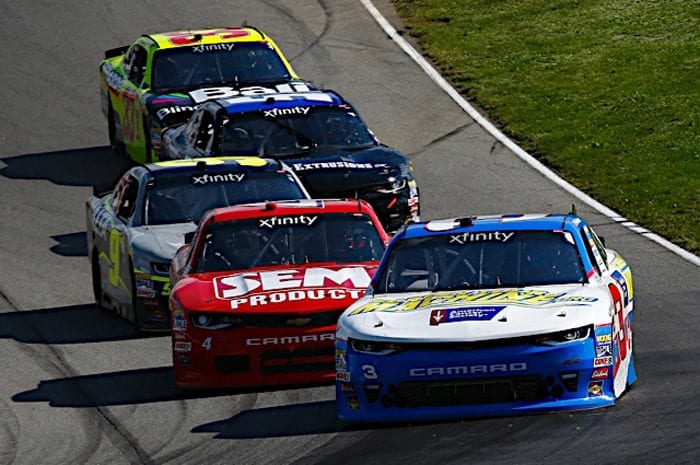 There are 40 teams entered in Saturday’s Rock ‘N Roll Tequila 170 for the XFINITY Series at the Mid-Ohio Sports Car Course.  Given that this is a standalone race, there’s going to be a fair amount of driver changes.  Even more so that it’s on a road course.

Andy Lally, who drove as a full-time teammate to Legge last year, will make his season debut in the No. 90 Chevrolet, replacing Brian Henderson.  He’ll be sponsored by Henry Repeating Arms.  The current plan is for Lally to drive in the remaining three road races as they do not conflict with IMSA races.

Brendan Gaughan, who worked as a pit analyst for NBC Sports at Iowa just a couple of weeks ago, will drive the No. 3 Chevrolet for Richard Childress Racing in place of Austin Dillon.  South Point Hotel & Casino will sponsor Gaughan in addition to Daniel Hemric.  Gaughan loves road racing and is a past winner at Road America.  Don’t count him out.

Cody Ware has been tapped to take over the No. 8 Chevrolet at BJ McLeod Motorsports, replacing Scott Heckert.  Ware does have a road racing background, having competed in Lamborghini Super Trofeo North America.

Joe Gibbs Racing has placed Kyle Benjamin in the No. 18, replacing Ryan Preece.  Iowa was reported to be Benjamin’s final race of the year at JGR for Benjamin, so it appears that he has earned an extra race.

Justin Marks is back with Chip Ganassi Racing in the No. 42 Chevrolet Accessories Chevrolet.  He won the race in a driving rainstorm back in 2016 and looks to challenge for victory once again.

After withdrawing the No. 55 last weekend at Watkins Glen, JP Motorsports is back with both of their cars.  The team announced Tuesday night that Dylan Murcott would drive the No. 55 Toyota.  Murcott has spent multiple years racing in the IMSA Continental Tire SportsCar Challenge.  Last year, Murcott, along with teammate Dillon Machavern won the Grand Sport class championship driving a Porsche Cayman GT4 Club Sport MR for Rennsport One.

Finally, Tim Cowen returns to the XFINITY Series in the No. 66 Dodge for Motorsports Business Management.  He’ll replace Timmy Hill, who raced at Watkins Glen and is busy on Saturday at Michigan.