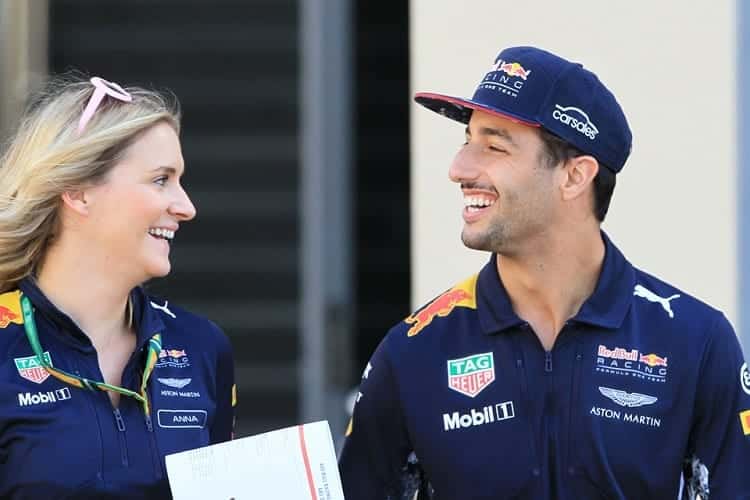 The big news that surprised the Formula 1 world last week came in the form of Daniel Ricciardo announcing he would be switching to the Renault factory team for the 2019 season. Ricciardo had been thought to be re-upping with his current team, Red Bull.  In fact, most of the rumors had made it seem like it was fait accompli for Ricciardo to be with the Milton Keynes (England) team for next year.

A change is gonna come. Excited for the next chapter with @RenaultSportF1. Thank you for the kind messages and well wishes I've received. pic.twitter.com/2qpKYYGGvH

Somewhere along the way, things changed. Ricciardo has finished higher than his teammate, Max Verstappen, in both of the last two seasons, demonstrating more consistent efforts and recognizing that finishing a race is rather important. This season is no different, as even though he has suffered four DNFs to Verstappen’s three, Ricciardo is still ahead of his teammate in the standings.

Early in the 2018 season, Ricciardo was rumored to move to either the vaunted Ferrari team or the alpha for the last four years, Mercedes. Then things became clear when people remembered that Ricciardo and Ferrari’s Sebastian Vettel didn’t play well together at Red Bull and Mercedes revealed they didn’t want to take on Ricciardo’s salary while already paying Lewis Hamilton’s considerable ($50 million a year) sum.

With Ricciardo losing out in the game of musical chairs, Red Bull seemed like the place to play as the switch to Honda motors next season would likely reinvigorate a team that has been enduring an abnormal number of mechanical failures (though not all of those failures have come at current powerplant supplier Renault’s fault).

Perhaps the moment of clarity came this year during the fourth race of the season, the Azerbaijan Grand Prix. There, on the tight street course of Baku, Ricciardo and Verstappen faced their biggest nemesis: each other. Red Bull has made no secret of its belief that Verstappen is the future of the team, but sometimes present and future collide. In Baku, Ricciardo sought to overtake Verstappen, who was clearly slower, in a move that would have given Ricciardo a chance to challenge for a podium. Ricciardo asked for help from the team, yet Verstappen never yielded — a rather common occurrence.

When Ricciardo moved inside of Verstappen at the end of a long straight, he was then cut off and brake-checked, leading to Ricciardo spearing Verstappen and two drivers ending their day. Teammates enduring an on-track fracas is nothing new — it happens in all forms of racing — but the silence over the incident from the Red Bull team surely didn’t sit well with Ricciardo, who appeared to be in the right.

That has ostensibly been one of the issues with Verstappen, in that for all his questionable moves, he has rarely faced any consequence, holding the role of the golden boy at the team.

Playing pop psychologist is fun, and there may be a whole world’s worth of other issues that came to fore as Ricciardo looked toward his future, but surely the Azerbaijan GP was a moment that stuck in his crawl. Renault offering a contract must have come across like a lifeline or an escape route. Is it the best move for his career? That’s the big question.

Renault isn’t currently setting the track afire, but it’s not a backmarker either. As it’s only been back in the sport as a works team for two-and-a-half years, it is experiencing the realistic difficulties of playing catch-up, after taking over the Lotus team. Yet there’s a sense of promise with the French manufacturer, a team that has won championships previously and is willing to spend. That it will be cutting down on the engine supply aspect of the organization should devote more effort to providing better engineering on its own cars.

Ricciardo has the opportunity to drive with what should be a team on the rise with Nico Hulkenberg, who comes across like an affable teammate.  He’s also leaving the Red Bull team as it could very well face difficulties in its switch to Honda. Whether the situation turns into a win-win is one for time to tell, but Ricciardo’s move should bring rejuvenation while also making this year’s Silly Season all the more interesting.

– While Ricciardo has held sway over the headlines, the situation with Force India is probably a bigger story, forced into administration before the Hungarian Grand Prix when its driver, Sergio Perez, started proceedings against the team. Perez had been encouraged to make this move as it brought the troubles to light and everyone involved hoped it would lead to a positive outcome.

The long-story-short version of the ordeal is that Force India has secured financing through a group led by Canadian billionaire Lawrence Stroll. This name had been bandied about almost immediately after the team had been placed into administration. There had been, and still is, hope that Stroll will craft a marriage with the team’s current engine supplier, Mercedes, in a way that makes the team almost a second Mercedes factory team.

That fear is compounded by the fact that Ferrari have a similar relationship with Haas F1, much as Red Bull does with Toro Rosso. Thus the overall concern is that independent teams are being forced out or that the sport will lose some of its ingenuity by having so many close relationships. That would leave a team like McLaren or Williams in a tough spot. How the situation with Force India shakes out will indicate if we’re headed for a grid full of superteams or not.

The second aspect that shakes up the sport is that Stroll is likely to put his son Lance on the team for next year. The younger Stroll currently drives for the underwhelming Williams team, and this move would be a gift. Such a move kicks Esteban Ocon out of the seat. This shift is one that is near certain to happen.

– Silly Season. Carlos Sainz Jr. was once a prized commodity and is now out of a ride after Ricciardo took his seat at Renault. Esteban Ocon is likely out at Force Inida. No one has any idea if Kimi Raikkonen will be holding down at Ferrari for another season. Then there’s Fernando Alonso, who seems to have no other home available than the one he has at McLaren. These three names are going to dominate the next wave of the driver market, with the prospect of Sainze joining Alonso at McLaren. Right now, it’s all smoke and mirrors, a magic show that Ricciardo delivered in amazement.

Excellent summation of the Ricciardo situation. As for the three drivers you mentioned as being the key to “silly season” Kimi is the one most likely to leave. He no longer seems to be a legitimate threat to win, and I doubt that Ferrari will be willing to continue to pay his salary.
As for Fernando, he burnt all his bridges when he left Ferrari, despite his considerable talent none of the top teams want him now. So does he stay in F1? Probably.
Ocan will likely find a seat somewhere if he can bring some money to someone.
Piranha Club rolls on.

with Williams losing first Martini sponsorship and now the Stroll money where does that leave Williams? Can Claire turn it around, or does Dad need to rethink the business?