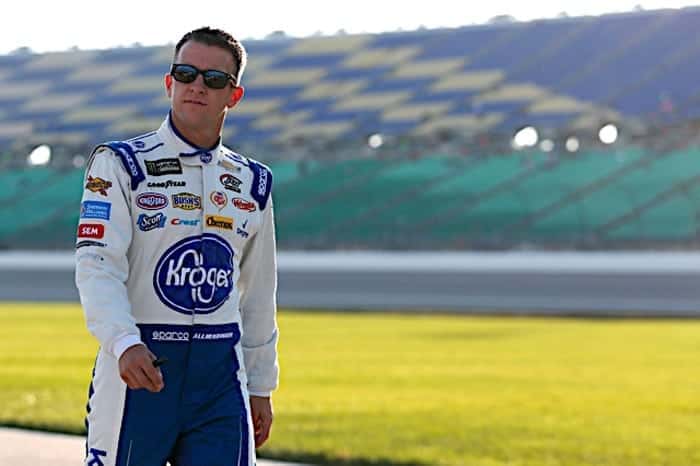 What will come of AJ Allmendinger’s Silly Season?

.@JTGRacing is evaluating its options as it relates to possible driver/team changes in '19 for its two cars, per people familiar with the matter.

➖ Drivers who have been mentioned as possibilities for JTG include @RyanPreece_ and @DanielHemric.

With the news of the above tweet, it’s almost sad at this point to consider how AJ Allmendinger‘s Monster Energy NASCAR Cup Series career has gone so far, as well as what could have been. It began with constant battles of adversity and may end with him either out of the sport or having to move down to a lower racing series.

Allmendinger began his NASCAR career driving for the upstart Red Bull Racing team in 2007. That particular season might be one of the single worst rookie seasons in the history of stock car racing. Allmendinger, despite attempting all 36 races, made only 17 of them and averaged around a 32nd-place finish in them. But that can’t be blamed on the former open-wheel driver; combine a brand new team with a rookie driver and a brand new manufacturer in a transition year with two different generations of racecars, and it was probably always going to be a disaster.

In 2008, Allmendinger missed the first three races before being replaced by Mike Skinner for the next seven so that he could get the car into the top 35 in owner’s points and be guaranteed a start. Allmendinger came back in for 21 more races, with the highlight of his tenure being a 10th at Indianapolis Motor Speedway, before being sacked with seven races to go in the season.

Allmendinger was signed to Richard Petty Motorsports at the start of 2009, but wasn’t initially fully funded to run the full season. Finishing third in the Daytona 500 helped to attract enough sponsorship for Allmendinger to race full-time, and he stayed with Petty for the next three seasons.

In 2012, Allmendinger finally got his big break when he was signed to drive for Team Penske in the No. 22 Shell Pennzoil Dodge. He was inconsistent to start the season; a second at Martinsville Speedway was countered by a 32nd the next week. He had finally started to find some consistency and had two straight top 10s before failing a drug test mid-season.

Allmendinger was let go by Penske and could only watch as former teammate Brad Keselowski won the organization’s first Cup championship later that year. Allmendinger was reinstated later in the year and began to balance racing for Penske in IndyCar/XFINITY, Phoenix Racing in Cup and Michael Shank in IMSA.

After winning a couple of XFINITY races for Penske in 2013, Allmendinger was signed on to drive for JTG-Daugherty Racing full-time in Cup, where he has been ever since. After winning both he and the organization’s lone Cup victory in 2014, he signed a six-year contract extension, giving the small organization a figure it could build around.

It’s pretty clear at this point that the extension was a bad move. When he signed it, Allmendinger was a big name on the free agent market and could have maneuvered his way back to a top of the line Cup ride eventually. But now, after years of mediocre results, Allmendinger may leave the team with substantially less name value with which to find a new team/sponsor. The team has grown to include two cars, but its performance has not substantially improved since Allmendinger’s deal.

Somehow taking Adderall was a better career choice. He’s a road course ace who just finished 15th at Watkins Glen International after being a non-factor the entire day. It’s a cautionary tale for drivers, and it’s the reason we don’t see such long-term deals very often.

Is Brian France’s tenure at NASCAR over?

At this point, there’s really not a whole lot to add to the Brian France situation that hasn’t already been said.

It’s questionable at this point whether or not France will eventually return to power in NASCAR. Although it’s definitely a possibility, you have to remember that, unlike his father and grandfather, France’s heart has never been fully into stock car racing. He was rarely ever at the racetrack, and there had been rumors as early as 10 years ago that France was looking at leaving and buying into an NBA team.

He said not too long ago that he didn’t see himself involved as long as his predecessors, who were both major forces right up until either death (Jr.) or until the last few years of life (Sr.).

France’s three biggest accomplishments while involved in NASCAR were the creation of the Camping World Truck Series, the increased focus on safety and three national TV deals. While great accomplishments, that pales in comparison to what his father did, or what his uncle Jim has done for IMSA. It might be in everybody’s best interest to just move on.

Kyle Larson enters Michigan International Speedway in an odd position. Although still the highest Chevrolet driver in points, his Chip Ganassi Racing ride has definitely been a couple of clicks behind the surging Hendrick Motorsports in recent weeks.

Larson swept both Michigan races last year, but he didn’t show much in the June race this year, spinning out and struggling to finish 28th. He might be able to rebound on Sunday, but he has to face the same old, same old at the front of the field. Kevin Harvick led the most laps and won stage two of the rain shortened June race earlier this year, but had to settle for second once the race was called. He’ll be looking for his first win at Michigan since 2010.

Kurt Busch has typically been better than his brother Kyle. The older Busch is entering this weekend wanting to extend his streak of five straight top-15 finishes at the 2-mile oval.

What will happen at Mid-Ohio Sports Car Course?

The Mid-Ohio Challenge has become one of the most unique races on the XFINITY calendar — especially when it rains, which there is a chance of on Saturday when the race begins.

Defending race winner Sam Hornish Jr. will not be in the field, which should make things very interesting. If it rains, expect some of the sports car regulars such as Andy Lally and Katherine Legge to rise above their backmarker equipment and challenge for the win. If not, expect Justin Allgaier to be the favorite to win.