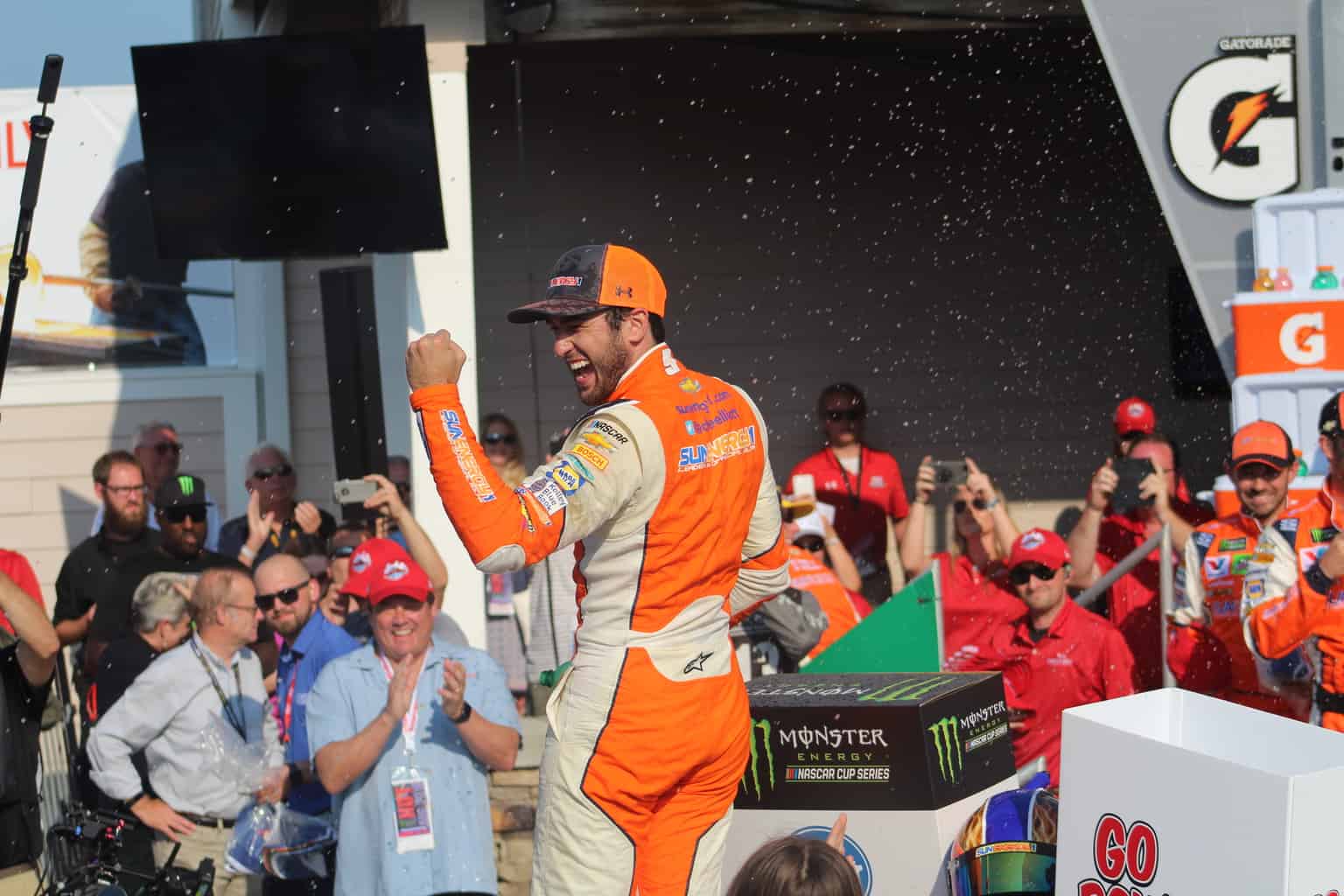 First, Elliott’s maiden win, which had been awaited since he broke into the series full-time in 2016.

Then there was his nearly 100-race losing streak, one that’s quite the tally for any supposed elite driver, not just one of NASCAR’s most popular personalities.

And finally, the win rendered useless a statistic that had been bandied about often in recent months especially: Elliott’s eight second-place finishes without a win, a fairly lucrative stat as few had approached that kind of consistency without actually winning at some point as well.

It’s dead and gone, now; Elliott’s on the board, and even if he ends up one of Cup’s biggest busts of all time (spoiler: that’s highly unlikely), at least he’ll always have that win to his name.

With Elliott and Erik Jones scoring their first Cup wins in 2018, they join Ricky Stenhouse Jr., Austin Dillon and Ryan Blaney as first-time winners in the series in the last two seasons. That’s not an amount to sniff at; Chris Buescher was the only driver to get his first Cup win in 2016, and there were none in 2015. The so-called youth movement of NASCAR is starting to actually see results that even the most casual fans will remember, instead of straining to remember how many top 10s such-and-such rookie or second-year driver has.

The influx of new winners also means that there are less of those triumphs to go around. The more winners there are, the less non-winners that exist. Of course, a rookie class will replenish the latter each year, granted there are rookies to be had and spots for them to take. There are rumblings of a shortage of rides for drivers like Christopher Bell in the XFINITY Series, but that’s a story for another day. Once he gets here — and oh, he will — he and whatever other rookies have risen up the ranks by then will fill the roles Elliott and Jones have assumed in 2018.

Until then, there remains a crop of drivers racing on NASCAR’s national level that hasn’t won a single Cup race. They range from veterans to relative newcomers, full-timers to journeymen, old and young.

And let’s put it this way: none of them come close to Elliott-like runner-up stats.

That’s because, among all drivers who’ve competed in a NASCAR national series race in 2018 that have not won a Cup race, the most second-place results is two, and that’s by a driver who doesn’t even race in the series full-time anymore and probably won’t ever again.

In 2008, his second full-time Cup season, David Gilliland finished second at Sonoma Raceway while driving the No. 38 for Yates Racing. It’s become one of two runner-up finishes the 42-year-old has achieved in his Cup career, the other coming in dramatic fashion when he pushed teammate David Ragan to victory at Talladega Superspeedway in 2013, scoring a 1-2 finish for Front Row Motorsports.

Four additional drivers have one second-place finish without a win. There’s Jeff Green, the one-time XFINITY champion who ended the race second at New Hampshire Motor Speedway in 2002 while driving his first full-time season for Richard Childress Racing and still drives in XFINITY, mostly as a start-and-parker. And then JJ Yeley, a NASCAR journeyman in every sense of the word who finished second at Charlotte Motor Speedway in 2007, his second year in Cup with Joe Gibbs Racing.

Those guys are unlikely to win a Cup race barring a major underdog story, likely at a restrictor plate track (and Green, who hasn’t run a Cup race since 2015, would have to return to the series). But the others with runner-up results, Daniel Suarez and Bubba Wallace, are a little different.

Granted, Suarez’s second-place finish is extremely recent. It happened just two races ago at Pocono Raceway after he won the pole and led a career-high 29 laps. Prior to then, he’d finished third at Dover International Speedway earlier this year and third at Watkins Glen last year.

But is he the best bet for the next first-time winner in the series? Absolutely, and not just because he’s the only non-winner with a second-place finish who still competes in halfway-decent Cup equipment. The JGR driver and former XFINITY champion has kicked his 2018 season into overdrive in recent weeks after a sluggish start, with two of his three top fives this season occurring in the last two races. He wasn’t awful as a rookie last year, either, especially given the sudden circumstances of his move into the series. He scored one top five, 12 top 10 finishes and a 16.2 average finish — pitiable numbers for a JGR veteran, but solid for a rookie.

Then there’s Wallace, who aside from his second-place finish to open the season in the Daytona 500 has been more in line with what one would expect from a rookie: simply OK. He could be a Suarez type in 2019, sure, but he doesn’t yet feel like a prime contender for that first win. Then again, folks probably said the same thing about Buescher two years ago.

Suarez is far and away the prime candidate, but he’s not alone. Two non-winners have one third-place result each: Reed Sorenson, whose third came over a decade ago when he was competing for a non-low-budget team, and Alex Bowman, the current driver of Hendrick Motorsports’ No. 88. Bowman hasn’t been exceptional since taking over for Dale Earnhardt Jr., but his own third — also at Pocono two races ago — could be a sign of things to come.

Otherwise, one most go outside the top five, specifically sixth. That’s the top finishing position of both Ty Dillon and William Byron. Dillon’s upward trajectory might be a little more stunted since he’s competing for single-car Germain Racing team rather than his grandfather’s RCR — and barring a breakthrough at Talladega or Daytona International Speedway, he’s unlikely to succeed due to equipment restrictions.

Byron, on the other hand, is a little different. Like Bowman and Elliott, he’s with Hendrick, though he’s taking a little more time to get acclimated to his seat despite being the defending XFINITY champion. Bear in mind, though, that Byron’s a little behind Bowman and Elliott not just in years. His start in this year’s Daytona 500 was his first ever in a Cup car; he didn’t compete in a race or two pre-rookie season as many have over the years. Some of the tracks he’s seeing, he’s seeing for the first time — and others he’s driving at for the first time in a Cup car, which has obvious similarities but differences nonetheless from XFINITY vehicles.

Still, given his obvious talent and the equipment he’s working with, it’s easy to place Byron among, if not a little behind Suarez and Bowman. There’s a feeling he’ll win eventually, much like Elliott before him, even if it’s not right off the bat in his rookie season.

Hey, maybe he’s the guy who’ll be the impetus for this column topic in two years.