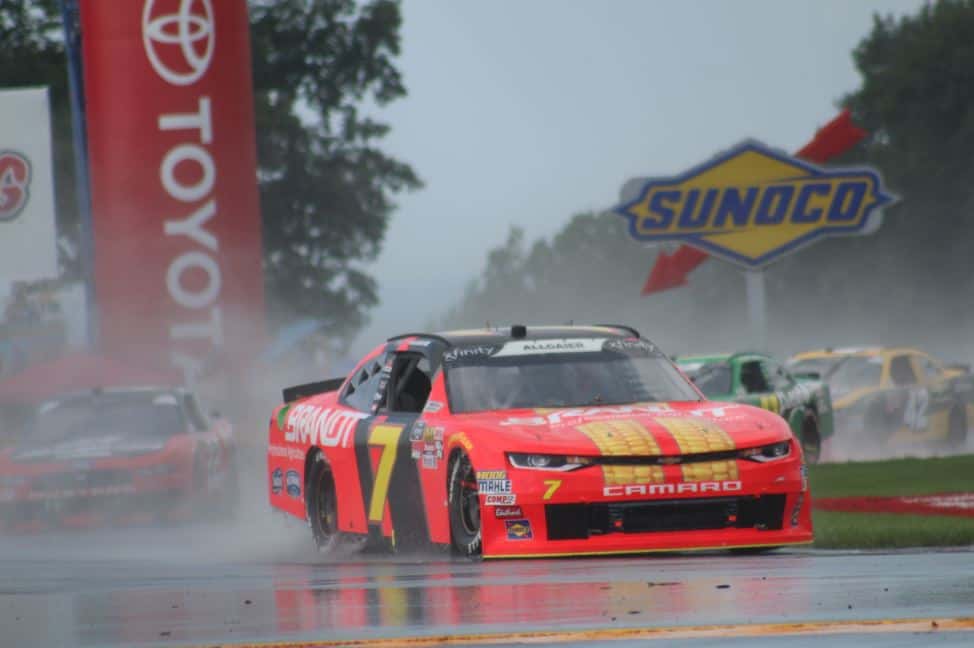 With 16 laps to go in the NASCAR XFinity Series race at Mid-Ohio, no one thought Justin Allgaier was going to win in Mid-Ohio after he was turned by Cole Custer. But the two cautions that followed, allowed Allgaier to get fresh tires and come all the way back to the front and shock Austin Cindric and Team Penske team to grab the win.

Cindric dominated the race, but was bested by Allgaier’s tires and had to settle for second. Daniel Hemric finished third, while Matt Tifft came home fourth and Ryan Truex rounded out the top five.

Cindric was on pole for the first time in his career and he was able to pull out to an early lead when a caution came out on lap 1 when the No. 55 of Dylan Murcott went off course and flew into the tire barrier.

On the restart, Cindric pulled away as Custer and Sadler made contact, allowing Allgaier to make a strong move to the outside for second. Custer left the fight with a large tire rub on right rear tire, but it did not affect his car enough to need to pit.

Brandon Jones ran into some problems with 14 to go in stage one, as he overshot the corner and went into the grass, causing a loss of traction and a spin that sent the No. 19 all the way to the back of the field.

With two laps to go in the first stage, Cindric elected to pit instead of going for the playoff point. Allgaier inherited the lead and the stage one victory. While he grabbed the green and white flag, the No. 7 car had to fight hard to hold off lapped car of Jones, who was on fresher tires, but Allgaier did not allow the pass to be made and Jones had to settle for the free pass.

Cindric was back in the lead to start stage two after the rest of the field made their first stop ahead of Tifft and Custer, who put pressure on Cindric. However the Team Penske driver made it clear early that he had the car to beat.

A couple of corners into the restart, Allgaier made it four-wide on a part of the track where such racing did not work and went off into the grass. The stage one winner fell all the way back to 19th.

The third caution of the day came out on lap 30 when Ryan Sieg‘s car suffered a mechanical problem, leaving him rolling at a snail’s pace while leaking fluid on the track. Chase Briscoe was spun on the following restart, Allgaier barely missed the carnage as the second stage came to a close.

Cindric took home the second stage and lead the field off of pit road following the end of stage two.

The late race drama came with 16 laps to go, when Custer and Allgaier were in a heated battle for fifth when the No. 7 drifted up the track on the slow right hander and Custer spun the stage one winner around. Tifft ran into the back of Tyler Reddick as they avoided the Allgaier/Custer collision, causing major right rear damage to Reddick’s No. 9, cutting his tire and bringing out a late caution.

On that next restart, Sadler and Christopher Bell got together, spinning Bell and stranding him in the grass. After running in second most of the third stage, Bell had to settle for 11th.

Just before Cindric could put the finishing touches on this race, Jeremy Clements went spinning into the gravel and Katherine Legge‘s engine gave out, bringing out the sixth caution and bunching the field back together one more time.

Allgaier was able to get all the way back to second on the restart with 6 laps to go. His much fresher tires made the No. 7 a threat to the Cindric’s dominating Saturday. Allgaier was able to chase down the No. 22 and took the lead in Turn 1 with four laps to go. But a lock up by Allgaier brought Cindric back into the fight as they battled side-by-side, allowing Hemric to join the fray.

When the checkers flew, it was Allgaier racking up his third victory of the season, one behind Bell for the series-high.

The XFINITY Series heads to Bristol next Friday night (Aug. 17) before turning left and right on another road course at Road America on August 25.