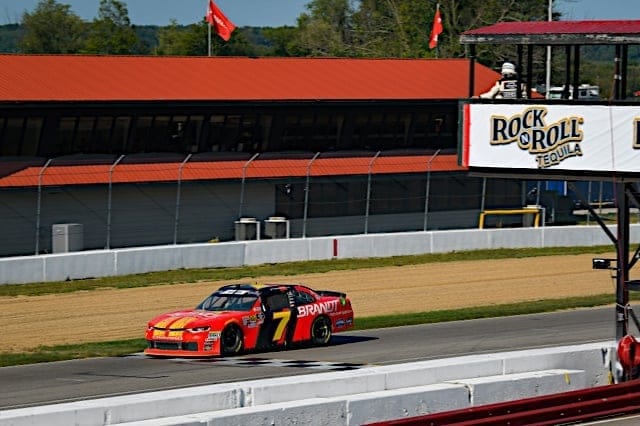 Since returning to the XFINITY Series full-time in 2016, Justin Allgaier has always been in contention to win a road course race. On Saturday (Aug. 11), the No. 7 team delivered, stamping his third race win of the season, this time at Mid-Ohio Sports Car Course.

Allgaier, who does have one previous road course win in the series to his credit (Circuit Gilles Villeneuve, 2012), had to overcome adversity at Mid-Ohio after getting involved in two incidents on the day.

Following his fifth stage victory of the season, the No. 7 car pitted while most of his top competition had pitted just before the end of the first stage. Allgaier was trapped mid-pack and on the outside of a four-wide battle, which sent him back to 19th.

However, Allgaier would not be denied, rebounding to fifth. But with 16 laps to go, Cole Custer spun the No. 7 battling for fifth. Meanwhile, it was a caution from his JR Motorsports teammate Tyler Reddick that saved the race for Allgaier. Jason Burdett elected to bring the Chevrolet down pit road, and what a difference it made.

“That call there at the end was what did it,” Allgaier said in Victory Lane. “Austin had the best car today, and I thought we gave it away there getting pushed off the racetrack, but I was able to come back. It’s a testament to these guys at JR Motorsports. We’ve been good this year and to do it on a road course is even better.”

.@J_Allgaier's triumph marks JRM’s second win @Mid_Ohio and third on a road course. @ReganSmith won in 2015 at Mid-Ohio and Ron Fellows won at Montreal in 2008.

Cindric was able to hang on to second, while Daniel Hemric, Matt Tifft and Ryan Truex rounded out the top five.

Austin Cindric had himself a career-day on Saturday, only to get passed for the win four laps remaining.

The 19-year-old was one of the pre-race favorites as he has a background of road racing. He delivered in qualifying, winning his second pole in three career road course races in the XFINITY Series.

Stage one was owner by Cindric, though crew chief Brian Wilson decided to bring him into the pits with three laps to go in the stage, as many drivers had already pitted. Stage two was much of the same, the No. 22 car dominated, en route to his first career stage victory. He was in position for a solid final stage.

After getting by Andy Lally, Cindric checked out. Once the No. 22 sniffed clean air, he was gone, which seemed to happen after every restart. Meanwhile, Allgaier was able to drive up to the rear of him with four laps to go and passed the dominant car, as Cindric finished a career-best second.

Good hard racing from @J_Allgaier moves him into the lead! Less than 3 laps remaining at @Mid_Ohio, but it's not over!#NASCAR pic.twitter.com/0Dalj6XsE9

“New tires. At least I didn’t get out-driven or outsaved tires,” Cindric said of the second-place finish. “We did everything we could control today, and I think that’s all you can ask for. Big points day for me. Getting a stage win which was huge. Executed on every restart, just too bad we couldn’t capitalize on a dominant car.”

Cindric led a career-high 59 laps at Mid-Ohio, and will likely be the favorite heading into Road America in two weeks.

Dylan Murcott made his XFINITY Series debut on Saturday, and it didn’t go as planned. A race that saw beatin’ and bangin’, also witnessed a first-time driver crash on the opening lap of the series.

Murcott, 26, qualified 34th for JP Motorsports, but it didn’t take long before his day came to a crashing halt, literally.

Not even halfway through the first lap of his career, the No. 55 car seemed to have a mechanical failure and lost brakes, driving head-on into a tire barrier. Murcott exited the car and finished last.

⚠️: The No. 55 brings out the first caution of the day at @Mid_Ohio. pic.twitter.com/JL6aDLTMPX

JP Motorsports is in its first year of existence and has yet to hit the ground running. Between the Nos. 45 and 55, the team has a best finish of 15th at Daytona with Stephen Leicht.

Whenever there is a fight in the garage area, it typically gets ugly. And over the past few seasons, Ross Chastain has had his fair share of rivals. Add Joey Gase to the list.

Fight in the paddock.

Ross Chastain and Joey Gase got into it on the track and again on pit road.

By time I got there, a crew member had tackled Gase. pic.twitter.com/YairNYxf6U

As the race winded down, Chastain and Gase were having a heated battle on the track. But that boiled over when the two drivers traded paint on the final lap through the esses and down into a tight corner. It ended with the No. 4 punting the No. 35, as Gase spun through the grass.

.@JoeyGaseRacing and Ross Chastain got into it after the race at @Mid_Ohio with Gase being reportedly tackled.

Check out the replay of what led to the incident, and hear from the man himself. pic.twitter.com/8g4Oo73apC

He’s a golden child and can’t do anything wrong,” Gase told a group of reporters after crossing the finish line in 24th. “If anyone ever touches him, it’s the other guys fault, I guess. I passed him clean through the keyhole and on the last lap he left it open, I drove it in hard and I had the [No.] 5 on my butt. Then going through the esses — he hit me — I don’t know six times and then he pushed me off into the grass. He can race anyone else hard, but when anyone races him hard, it’s a problem.

“Dipshit has to remember he’s the one trying to get into the Chase, and I’m too far out, so we can make that real hard on him… He just always races me really hard, and if I race him hard it’s an issue and I guess that’s the biggest problem.”

Chastain was able to finish 16th, and an nine points to his advantage over Michael Annett for the final playoff position. However, he’s now made an enemy out of Gase, who feels like he owes him one back.

This season, Gase has seen an increase in performance with what he considers the “most sponsorship” he’s ever had. Through 21 races, he sits 21st in the standings for Go Green Racing.

Not only did Austin Cindric have a career-day on Saturday, so did Alex Labbe.

Labbe, 25, is in his rookie season for DGM Racing, and is quietly having a respectable season, especially for an underfunded team. However, he enjoys coming to road courses, which he has some experience at in the Pinty’s Series.

At Mid-Ohio, Labbe qualified 13th, which was a career-best. During the race, the No. 36 car was a factor, and even restarted on the front row with teammate Andy Lally to begin the final stage.

After making his final pit stop, Labbe was able to drive his Chevrolet back to ninth, which marked a career-best finish for the Canadian driver.

Solid day for the DGM crew, we ended up P9!! Fought thru a lot of adversity and brought a solid result back home. So proud of everyone involved in our program pic.twitter.com/HROP2JssJI

“It was a good day,” Labbe said after the race. “We had a loose tie rod and brake issues early so that put back in the pack. I’m really happy that we were able to fight back there at the end and get a solid top 10.”

Labbe finished 11th in Thunder Valley in April, which was his best finish in the series prior to Saturday. It’s safe to say he’s excited to head back to Bristol next weekend.

Ironically, it’s a duo of JD Motorsports teammates that are pulling double duty this weekend between Mid-Ohio and Michigan.

Ross Chastain hung around the top 10 all day long, though finished 16th after picking up six stage points in the opening stage. Garrett Smithley will be making his third Cup start of the season on Sunday, and finished 28th on the road course.

“Too bad we couldn’t capitalize on a dominant car… I had every opportunity to shove him [Allgaier] off the track, but I didn’t need a win that bad.” – Austin Cindric

“I thought we maybe had some sort of mechanical failure at the end, I started losing the back of the car. I, happily, was able to nurse it to the finish.” Daniel Hemric

“I’m pretty mad at myself, I wheel-hopped it into [Turn] 2 after we finally got some track position.” – Ryan Reed

Road racing is the best racing. Yes, I’ve always been high on road racing, and am excited NASCAR added the ROVAL in September, adding another one on the schedule, but Mid-Ohio was the perfect race.

Why? It had a little bit of everything. Pit strategy, bumping, banging, tire wear, everything that puts on a good race was balled up into one, and the fans got a great showing at Mid-Ohio. There is one race before the series heads to Road America, which was one of the best races of the season last year, when Jeremy Clements shocked the racing world picking up the win.

The XFINITY Series will head to Bristol Motor Speedway next Friday evening (Aug. 17) for its annual night race. In the spring, Ryan Preece picked up the victory in his third start of the year. However, it was his teammate Brandon Jones who arguably had the best car, leading a race-high 106 laps.