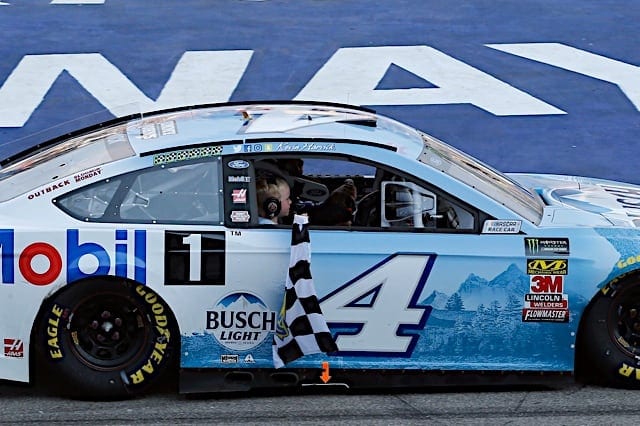 Much like Austin Cindric did on Saturday in Mid-Ohio, Kevin Harvick straight up put on a clinic. The only difference between the two was that Harvick landed in Victory Lane while circumstances and a late-race pass for the lead put Justin Allgaier in Victory Lane and Cindric in the runner-up position.

Harvick noted following Sunday’s race that it always seems to be something in the end that costs a driver a victory. Whether it be a late race restart or a problem, circumstances can always come into play.

Austin Dillon was about to be that circumstance that put the driver of the No. 4 in second place for the seventh time at Michigan since he last won there in 2010. Four Goodyear tires compared to two was the circumstance that landed Harvick in Victory Lane and Dillon in fourth.

Circumstances can always be the downer in a situation and this weekend, it was on Cindric. Harvick has had his fair share of those types of races but still, he’s been able to capitalize on those circumstance free races to earn 44 win in the Cup Series.

No matter who you are, circumstances can be the difference between a win and a loss. Circumstances can sometimes overlook dominating performance and that was the case for Harvick at Pocono a few weeks ago. Look at last weekend for another example when Kyle Busch and Chase Elliott dominated the race at Watkins Glen. Circumstances again played a part of the race as Busch had a problem on pit road and Elliott sailing away with his first career victory.

Whichever Big Three driver heads to the playoffs, circumstances will play in who will win the championship. After all, a flawless performance is the best way to win races and ultimately a championship. – Christian Koelle

Prior to the season-opening race at Daytona, Justin Allgaier was on the short list of favorites for the championship, and through the opening 21 races, he hasn’t disappointed.

Sure, Christopher Bell has a series-high four checkered flags, but Allgaier is starting to regain consistency, something he’s struggled with for much of this season.

Since an early crash in the event at Pocono Raceway in early June, Allgaier has been on a tear. Over the past nine races, he’s got two victories, five top-five finishes and all have resulted inside the top 10.

Allgaier has racked up 15 playoff points and would have 20 had it not been for a post-race infraction following the Dover race. But he’s led a series-high 504 laps, which is nine laps more than last year.

When the checkered flag flew over Michigan International Speedway Saturday afternoon, Brett Moffitt was able to add a fourth winner’s sticker to his No. 16 Toyota. Following a thrilling last-lap pass on Johnny Sauter, Moffitt matched Sauter’s win total this season. For his part, Sauter blamed himself for a “mistake” that cost him the win.

“I blew it today. The mistake is on me, I thought if I stayed high I’d be okay,” he explained. “That’s where I had the most momentum all race and where my truck was more comfortable but that just didn’t work out when the 16 got to me. He had a such a run.

“This ISM Connect team worked hard last night and this morning to make adjustments before qualifying. We were a little off in practice yesterday and knew we needed to do something big. It worked out and they gave me a great Chevy, I just didn’t do what I needed to do at the end.”

The duo has a combined eight wins in 15 races this season, though Sauter led his first laps Saturday since Texas Motor Speedway in June. In fact, it’s easy to see Moffitt and Sauter as two of the Championship 4 later this season.

“He’s (Sauter) going to be one of the final four at Homestead and he’s the only other guy to win four races this year,” Moffitt said. “It’s good to be able to join him on that level and get some points back on him. We’re tough competitors and we don’t like losing to each other. It’s good to go out on top.

“I’ve felt all year long that we’re a potential champion team. We just need to cross all our ‘T’s’ and dot all our ‘I’s’ and the biggest thing is execution. We’ve had the speed all year and we’ve worked well together all year and we’ve made out trucks better throughout the race in minimal, minimal time so the biggest thing is just going to be executing on the playoffs and when we get to Homestead, go have a perfect day.”

That’s not to say no one else has a shot at the championship, however they’re going to need to find the speed and execution if they want to beat Moffitt or Sauter as these races wind down. – Beth Lunkenheimer

TCR was dominated by Bryan Herta Autosport’s Hyundai i30 N TCRs.  Michael Lewis won the pole for Race No. 1 on Saturday and ran without worry from teammate Mark Wilkins behind for the win.  Race No. 2 on Sunday was more of the same as Lewis took the weekend sweep.

In TC, the task for the weekend was to defeat Vesko Kozarov and Rearden Racing at their home track.  For Kozarov, losing at home was not in the plans.  The first race saw Johan Schwartz lead early before Kozarov was able to sweep past and win.  Kozarov won the second race Sunday morning by leading flag-to-flag.

TCA was dominated by TOMO Racing’s Tom O’Gorman.  Saturday saw him racing hard with TechSport Racing’s Jeff Sexton before Sexton had an off-course excursion.  O’Gorman was never threatened on his way to the sweep. – Phil Allaway