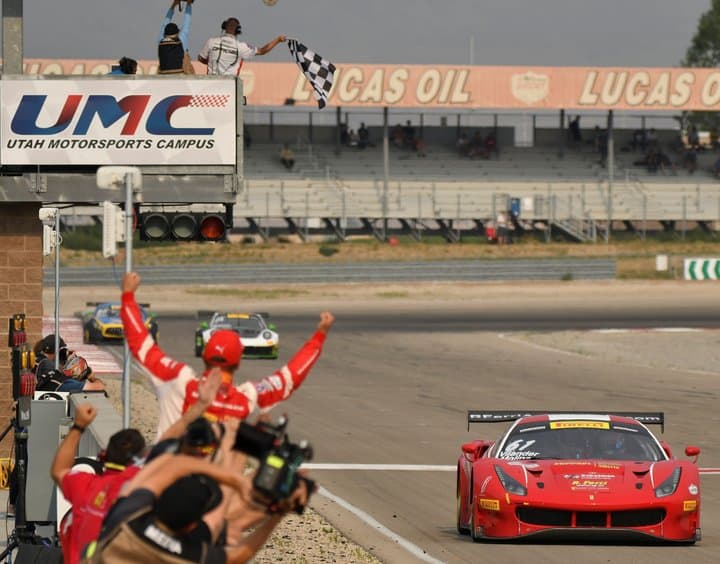 R. Ferri Motorsport’s Toni Vilander and Miguel Molina only needed to finish 50 percent of the race to claim the GT SprintX title.  They wanted more than that.  A swell pit stop at the halfway point of the race allowed Vilander to jump Lone Star Racing’s Scott Heckert.  From there, Vilander was able to hold on for the victory Sunday at Utah Motorsports Campus.

For Vilander and Molina, it was their sixth victory of the season in 10 SprintX races.  For Vilander, the win also puts him in great position to win the GT overall title in Watkins Glen.  While he’s currently second in the GT Sprint points, that’s not out of the realm of possibility as well.

“It’s just perfect,” Vilander stated after the race.  “I’ve been lucky enough to win [a championship] in Europe.  Now, it’s my first one in the United States.  I rate this really high.”

K-PAX Racing’s Andy Soucek did claim the pole for the race, but dropped to the rear prior to the green.  That gave the top spot to Lone Star Racing’s Mike Skeen.  Once the green came out, Skeen was able to open up a small gap on Molina and the rest of the field.

Further back, Maxime Soulet spun K-PAX Racing’s No. 3 Bentley and was hit by Alessandro Bressan in the Dream Racing Motorsport Lamborghini.  Soulet was able to continue without issue, but Bressan’s Huracan GT3 suffered significant right front damage.  Bressan drove it back to the pits, but his day was over.

Skeen was able to lead without issue up until the mandatory pit stop.  Skeen stopped first and got out in favor of Heckert.  The time in the pits was somewhat conservative.  A couple of laps later, Molina brought in the R. Ferri Motorsport Ferrari and had an excellent stop.  That was enough to allow the No. 61 Ferrari to jump the Lone Star Mercedes and take the lead.

Once out front, Vilander was able to open up a comfortable advantage and held on to take the win.

The margin of victory was 2.945 seconds over Skeen and Heckert.  Alegra Motorsports’ Michael Christensen and Spencer Pumpelly finished third, followed by Soulet and Rodrigo Baptista.  Soucek and Àlvaro Parente came from the rear to finish fifth.

In Pro-Am, it was once again TR3 Racing and TruSpeed AutoSport at the front of the field.  Unlike Saturday, Wei Lu and Jeff Segal were able to pull away from Ryan Dalziel and Parker Chase.  Dalziel just needed to get to 50 percent distance and the Pro-Am championship would be his.

Ultimately, Segal was able to get up to fourth overall prior to the stops.  Lu was not able to maintain that pace and lost positions to the two Bentleys.  However, that was more than enough for Lu and Segal to take the weekend sweep.

Dalziel and Chase were 6.615 seconds back in second, but that was still enough to claim the Pro-Am title.  Risi Competizione’s Anthony Lazzaro and Pierre Mulacek were a lap down in third.

In Am, Squadra Corse Garage Italia had no problems whatsoever.  Martin Fuentes claimed the class pole as a result of turning the fastest Am lap of the day on Saturday.  Once out front, no one was going to touch the No. 07 Ferrari as Fuentes and Caesar Bacarella took their ninth SprintX win of the year.

Saturday’s winner David Askew was second until he cut a tire with two laps to go.  That gave second to Turner Motorsport’s Naoto Takeda and Takuya Shirasaka.

Even though the SprintX season is now over, there is still one more Pirelli World Challenge race weekend in 2018.  The GT Sprint, GTA and GT overall titles will be decided Labor Day weekend at Watkins Glen International in New York.