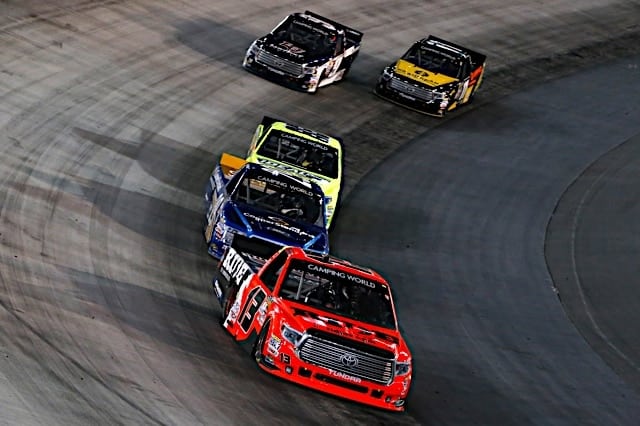 The NASCAR Camping World Truck Series heads to the Bristol Motor Speedway for a Thursday night showdown to close out the regular season.  This is the last chance for any driver outside of the top eight in points to steal a win and make their way into the Playoffs.

38 trucks are entered this week, meaning six will go home after qualifying.  There are many additions and changes to this week’s list compared to last week’s.

Two drivers will be making their series debuts, Stefan Parsons and Codie Rohrbaugh.  Parsons will pilot the No. 15 truck for Premium Motorsports while Rohrbaugh will drive the No. 09 truck for CR7 Motorsports.  Parsons is the son of Phil Parsons, former NASCAR Cup Series driver and current commentator for FoxSports 1.  He has made a name for himself through the local short track series, specifically the CARS Late Model Stock Tour the last few seasons.  This will be his NASCAR debut.  Rohrbaugh has run part-time in the ARCA Racing Series and has 4 top-10 finishes in his 7 starts this year.

On Point Motorsports will make its debut with driver Scott Lagasse Jr. in the No. 30 truck.  Lagasse Jr. has one start this season at the season-opening race at Daytona where he scored a fifth-place finish.

Tanner Thorson returns to the No. 20 truck for Young’s Motorsports for the first time since finishing 15th at Pocono.

Chad Finley will be behind the wheel of the No. 42 truck for Chad Finley Racing Inc.  In his last outing, Finley scored his best career finish of 6th at Gateway.

Kyle Busch Motorsports will have Harrison Burton behind the wheel of the No. 51 truck for the first time since his third-place finish at Iowa.

Riley Herbst will drive the No. 54 truck for DGR-Crosley Racing.  Herbst has one career start in the series where he scored an eighth-place finish at Gateway.