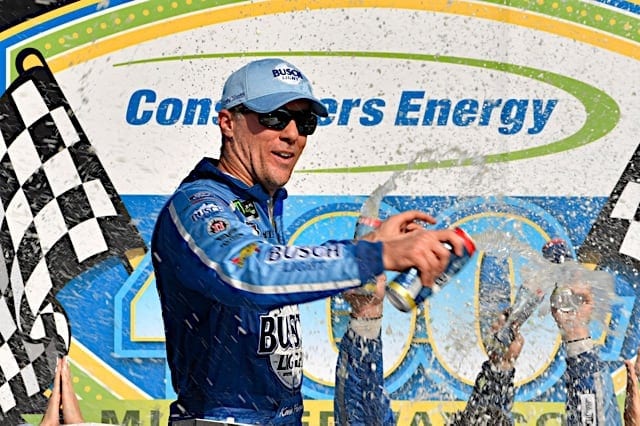 In recent years, races at Michigan have dropped off as far as competitiveness goes.  The track was repaved for 2012 due to some huge bumps.  Despite seven seasons of racing and six Michigan winters, the groove still has not widened much.  Track position has been paramount.

Prior to the race, Dale Jarrett did a sit-down interview with Kyle Larson.  Here, they talked about Larson’s versatility in different types of race cars.  Apparently, this will be the last time that Larson talks about his dirt racing at a NASCAR track because he ticked too many people off.  Quite a shame, actually.

Here, we learn about Larson intentionally driving in multiple classes whenever he could, starting in go-karts.  Here, you have a racer that came up on Western dirt tracks who has won Cup races, XFINITY races and even the Rolex 24 overall (2015).  The Rolex 24 is almost as far away from the Outlaw Kart we saw on Racing Roots as you can get.

Sunday’s Cup race did go against the grain at times.  For instance, NBCSN took great pains to note how the inside line was useless on restarts.  Then, a couple of lead changes in the race resulted from drivers on the inside line snatching the advantage on restarts.

Then, you had the crazy instance that ultimately put Ty Dillon out of the race.  This was more or less chaos in real time.  At first, it was hard to tell what Dillon hit.  The first thought was tungsten ballast.  That’s pretty solid.  Actually, had it been ballast, that probably would have been a much worse situation since those blocks weigh anywhere from 25-75 pounds.

Having said that, it’s happened before.  For example, back in 1994 at Watkins Glen, Rick Mast spun out in his own ballast.

After a while, it became clear that Dillon hit a battery.  No one knew where it came from, but the consensus was that it had been there for a lap or so.  FOX Sports’ Larry McReynolds indicated on Monday’s NASCAR RaceHub that they still didn’t know where the battery came from.

However, the truth had already been revealed.  40 minutes before that aired, the Twitter page for NBC’s NASCAR coverage tweeted this clip that shows that it came from Timmy Hill’s No. 66 Chevrolet.

It seems like that’s something that could have been figured out during the broadcast on Sunday.  I don’t recall seeing Hill’s No. 66 (with an interesting scheme from sponsor Rewards.com) at all on the broadcast, but as you can see, NBCSN did have footage of his battery coming out to play.

It appears that stuff like radio chatter is not exactly a shared resource like the in-car cameras are and have been.  NASCAR may need to look into fixing that going forward if it hasn’t already done so.

The cautions on Sunday meant that the race ran a little long.  Post-race coverage was actually extended by a half-hour to compensate.  That said, the focus was clearly on Kevin Harvick and naturally so.  He won the race, won all the stages and led the most laps.  There was also a substantial amount of focus given to Keelan since he got to get right out and celebrate with Kevin.

The whole thing did come across as touching, but I’m not sure about sticking a microphone in Keelan’s face.  Ultimately, it replaced the now-passé donuts and ripping asunder of rear tires since the No. 4 has to go to the wind tunnel.

In addition to the Harvick show, viewers got a few more interviews prior to NASCAR Victory Lap.  Given the sheer amount of post-race coverage that NBCSN provides, I feel like I’d want more instead of three Kevin Harvick interviews, plus Keelan getting air time.  Had Delana been at the race, she would have gotten plenty of time as well.

As far as on-track competition is concerned, NBCSN actually did do a pretty good job of bringing that action to viewers.  Yes, it seems like they had to hunt at times, but there was racing to be had.  The action around the restarts was pretty fierce.  Once things spread out, it naturally got a little harder.  I would have liked to see a little more coverage further down the order than what viewers ended up getting.

Saturday afternoon brought the Camping World Truck Series back to Michigan for 200 miles of action.  It was a rather interesting broadcast.

Normally, NASCAR RaceDay – CWTS Edition starts off with a recap of the previous race (in this case, Pocono) in montage form.  On Saturday, that failed.  The sound did not work, so no recap for you.  That said, they did apologize for the issue.

During the race, the booth seemed quite convinced that Stewart Friesen was the man to beat.  He showed a bunch of speed early on and could seemingly put his truck wherever he wanted.

Unlike the Monster Energy NASCAR Cup and XFINITY series, it was a little closer to the end of the “regular season.”  To that end, FOX Sports 1 added colored chicklets to their scoring bar to denote those who are locked into the playoffs and those in potential spots.  My guess is that you’ll see something similar in Cup and XFINITY on NBCSN starting this weekend at Bristol.

A lot of the action on the broadcast seemed to be right at the front of the field.  As a result, I felt a little lost at times.  Drivers would appear in the hunt out of nowhere.  Yes, this is 2018 and there’s almost always a scoring bar on the screen, but you can’t just use that as a crutch.

Post-race coverage was relatively brief since the race went long.  Viewers saw interviews with winner Brett Moffitt, along with Johnny Sauter and Kyle Busch Motorsports teammates Noah Gragson and Todd Gilliland.  What was interesting here is that Sauter was outright ticked with himself and seemingly upset with Alan Cavanna’s questions.

That may have been a situation where had Sauter not been required to do post-race interviews, he would have declined everything and broke something somewhere.  Probably the angriest interview out of Sauter since his God Bless America interview at Texas back in 2011.

Overall, the racing coverage was decent in Michigan on Saturday. Viewers got to see some good racing, but it was clustered a little too close to the front at times.  As a result, you couldn’t see follow drivers as they moved up the order unless you stared at the scoring bar.  I’m pretty sure you don’t watch races just to do that, right?

That’s all for this week.  Coming up is one of the more interesting weekends of the season.  Four nights of racing at Bristol Motor Speedway.  The action starts Wednesday night with the Whelen Modified Tour (broadcast will be tape-delayed).  The Camping World Truck Series has moved to Thursday night but gains a network television broadcast on FOX.  The XFINITY Series races Friday night, while Cup teams will take on the high banks for 500 laps Saturday night.

Outside of NASCAR, the Verizon IndyCar Series returns to Pocono Raceway for 500 miles at the scalene triangle.  In Virginia, IMSA will be at VIRginia International Raceway with all of their series.  Note that the main show is a GT-only race.  Finally, there’s a doubleheader at Silverstone this weekend for the FIA World Endurance Championship and the European Le Mans Series.  Listings are in the television tab.

We will provide critiques of the Cup, XFINITY and Truck races at Bristol for next week’s edition of Couch Potato Tuesday here at Frontstretch.  The Critic’s Annex this week will cover the Rock N’ Roll Tequila 170 from Mid-Ohio.

I always thought the excessive burning down the tires was obnoxious. Then the drivers felt like they have to get out of their race cars and do something for the camera and fans. Now NBC has to do an interview at the flag stand before victory circle. How could it get anymore lame/stupid? Let’s spend several minutes with a four year old on live TV. Next thing drivers will be bringing their pets to celebrate with them.

“I would have liked to see a little more coverage further down the order…” No kidding. Have you ever watched an F1 race? They do not inundate us with trivial details like the leader being, “tight entering turn one, loose in the middle of the turn, and tight exiting the turn.” They don’t provide us with coverage of the driver’s feet on the pedals. They don’t lecture us about how skillful and expert the drivers are because their hands are on the steering wheel. They don’t say “side draft” 5,873 times during a race.

They don’t tell us every time a car pits that the car is getting “four Goodyear tires and filled up with Sunoco fuel,” when we are watching with our own eyes the car getting four tires changed and fuel being added. In F1, of course, no fuel is added, but they don’t insult us by assuming that we can’t count to four and need to be told that they are putting four tires on, and that we care what bran the tires are.

What they do is show one car passing another for 17th place, because to them that’s what racing is about. One car passing another. Not the driver’s hands on the wheel, not air flow on the car, not how the driver enters a turn. They are not trying to teach us how to drive a race car or, perhaps, tell us how much they know about driving race cars, they are bringing to the viewer’s screen the exciting things that are happening on the track.

Unlike NASCAR where they tell us that a car has moved from 32nd place up to 10th place but has not shown the viewers a single one of those passes for position. It’s not like they had no idea that was going to happen, because the car in question qualified first, and went to the back of the field for a violation. So they knew he was going to advance rapidly, but they didn’t show it because it was the back of the field and not worth showing, even though it was a car racing and passing other cars for position. Unlike the leaders that they were showing us, who were all running in a parade.

do you have any idea why bristol truck race was not shown on tv in st louis area?thanks