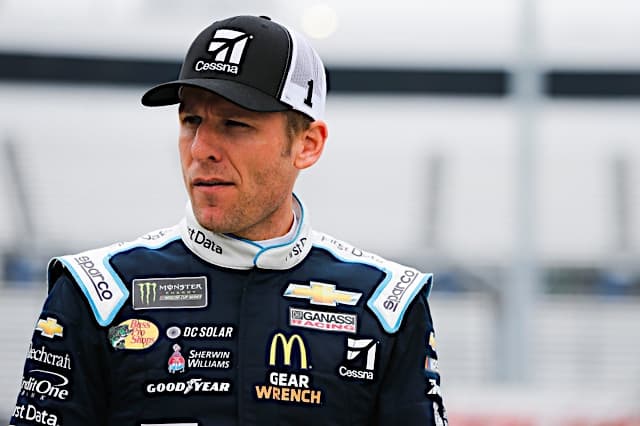 Did You Notice? … Jamie McMurray’s Monster Energy NASCAR Cup Series career could be entering its final stages? Rumors broke this past weekend Kurt Busch could replace him in Chip Ganassi Racing’s No. 1 car next season. Both drivers refused to comment extensively, but it’s been revealed McMurray is in the last year of his current deal.

Now 42 years old, McMurray’s ninth season behind the wheel at CGR has left him vulnerable. He’s led just three laps in 2018, collected only one top-five finish and sits a disappointing 22nd in the point standings. Barring a Hail Mary finish, he’ll miss the playoffs for the first time since 2014.

McMurray is dealing with a difficult year for Chevrolet’s new Camaro, but teammate Kyle Larson doesn’t help his cause. He’s pulled off six top-five finishes in the same equipment (including four runner-up results) and will make the postseason with ease. The No. 42 team has been arguably Chevy’s most consistent one until Chase Elliott’s recent surge; McMurray looks like Charlie Brown by comparison.

Should McMurray get released, his MENCS options are limited for 2019. The struggle for sponsorship is affecting the sport’s top-tier drivers (reigning champ Martin Truex Jr. and seven-time champ Jimmie Johnson); it’s unlikely he’ll attract corporate support to leave CGR. Few teams have open rides, and the ones that do (like Busch’s seat at Stewart-Haas Racing) have young drivers in the pipeline. Another option, Roush Fenway Racing, already went through a failed marriage with McMurray last decade.

It would appear retirement is in the offing, then, for the sport’s 2003 Cup Rookie of the Year. A career that started with such promise, a win in just his second Cup start replacing an injured Sterling Marlin at Charlotte Motor Speedway, is finishing up as underwhelming. Sure, there’s a Daytona 500 and Brickyard 400 win on the resume; drivers like Tony Stewart and Kyle Busch would drool over having both. But McMurray’s career holds little else other than a handful of restrictor plate triumphs and a second win at Charlotte.

Then again, this Missouri veteran’s career may stand out for different reasons. In the sport’s modern era, simply surviving this long with his track record is an accomplishment in itself.

McMurray will make his 570th MENCS start at Bristol this weekend. That ranks 33rd on the all-time list, placed smack in the middle of NASCAR Hall of Famers (He’ll pass David Pearson next month). Among that group, McMurray has one of the smallest win totals.

Sixth on the list, McMurray’s total stands out when you look at the money. Hylton and McDuffie were financial independents; they rarely, if ever, had enough money to compete with major teams. Kyle Petty’s father, King Richard, helped with connections to break into the sport at a young age. Same with the younger Waltrip whose brother Darrell was a three-time NASCAR champion before he became a Cup rookie.

Instead, McMurray’s career compares well with Schrader and Nemechek. Both men were plagued by bad luck despite spending extended time with some of the sport’s top teams (Hendrick Motorsports, Chip Ganassi Racing). Poor chemistry with crew chiefs developed into mediocre on-track performances despite solid sponsorship.

But McMurray has an advantage neither of those men have: he’s spent his entire career driving middle-tier equipment or higher. At some point, each of these others were cast off into independent rides or lower-tier opportunities with limited sponsorship. McMurray, by comparison, spent four years at Roush, during which his teammates won a total of 25 times (He won twice). The other 13 years have been spent at CGR, an organization that has just 16 total Cup wins but has never struggled with financial support.

The bottom line is this well-liked veteran has had his share of opportunities, perhaps more so than any driver in the modern era. But the final resume could produce no MENCS points finish better than 11th. That’s a far cry from what insiders thought he’d achieve after a remarkable start with CGR replacing Marlin in 2002.

Yes fans have noticed. Jamie Mac has been in 569 Cup races..he has won 7!!!!!!!!!!!!!!!!!!!!!!!!!!!!! He amazingly with his “nice guy” whatevers, have kept the wolves at bay to see what he has actually done in CUP and it is NOT MUCH AT ALL. Yeah he won a premium race that NASCAR and sponsors covet, but to a race fan “blah” and “meh”. Idiots complain that the “young ones” are not being brought up…maybe true..but owners are holding on to the Jamies, why? They can get the “young guys” cheaper…and how much worse could it be than what Jamie is doing. And nice guy or not. He hopefully invested wisely, he has lasted in a seat longer than he should have, sorry. Imo.

Jamie has had a unique career. Being a McMurray fan since Rusty retired, i am quite glad he has stuck around so long. That being said, I do believe the cars at Ganassi are not as good as this article indicates. I believe that Larson is just that talented and can truly wheel a car. I am not doubting that McMurray is a mediocre driver but his crew chiefs have been less than ideal as well. When everything lined up for McMurray in 2010 he won 3 races and had a legit chance to win 3 more (talladega, coke 600, bristol night race). He also had a pretty good 2014 season as well, led laps and had several top 5’s. I hope he gets one more year in the sport, but I totally understand if he is replaced. Just my observations. He also has had a really good relationship with his sponsers and Ganassi. He has had an impressive career to stick around so long. Other drivers of his caliber faded away long ago. Even Kenseth who is a champion and won last year was kicked out NASCAR, no one wanted him. Jamie must be doing something right! Get a win Jamie!