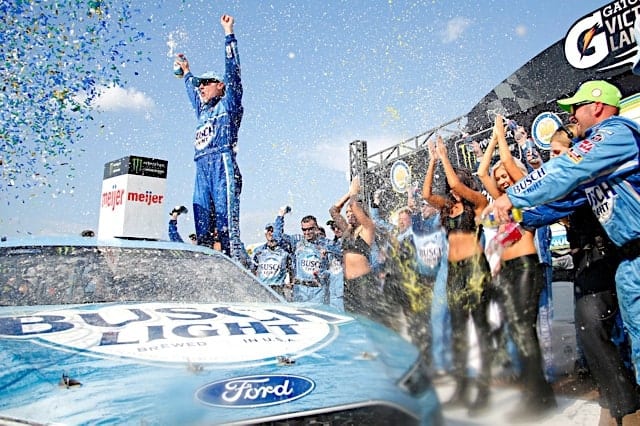 The racing throughout the 2018 Monster Energy NASCAR Cup Series has provided us with some of the best races we have seen in the last several seasons. The summer stretch has given us some new winners, and we have seen some drivers step up their game as we near the Playoffs.

Is this better racing than we have seen in year’s past or is it the same or even worse? Do we see it improve or will we see it become stagnant as we near the fall season?

The NASCAR XFINITY Series has been arguably the most entertaining series in NASCAR so far in the 2018 season. We have seen some domination at times from a few drivers like Christopher Bell and Justin Allgaier, along with the Monster Energy NASCAR Cup Series stars that run on a weekly basis.

However, who is the championship favorite? Is there not one or do we have a clear cut favorite as to who will raise the trophy at Homestead-Miami Speedway in November?

Q: How do you think the overall racing this season in the Cup Series has compared to the previous seasons now that we’re 23 races in? -Michael M. New York, N.Y.

A: This year’s racing has been quite different than year’s past. I am not just saying that because of the domination we have seen, but because of the actual racing on track. People will say the racing these days is not as good as it was 12-15 years ago, and I can agree with that 100 percent. However, for the Gen 6 car and the aerodynamics these cars have, the racing this year has been pretty good.

Even with one car having a huge lead in some races this season, the racing in the middle of the pack and back half of the top 10 is usually very entertaining to watch. This is one thing TV needs to do more of — show the middle of the field more than just the front. It does get a bit boring seeing cars spread out near the front of the field, but the guys toward the back half sometimes are very closely packed together, and they are normally together for an entire run.

The last several weeks though, the races have been very entertaining from start to finish throughout the entire field, even at the front of the field. Yes there have been weeks like Michigan International Speedway where one driver clearly has the best car and leads over half the race, but Kevin Harvick had to work for the win this past weekend as an example. He may have led over 100 laps, but there were points where he was mired in traffic in the back half of the top five and had to pass cars, which is very difficult at Michigan. That is what makes it entertaining though.

When you have one car who is the class of the field mired back in traffic and you know they can easily pass cars, it will make for an entertaining race to see them come back to try and win the race. I will say, the racing this year is better overall than I have seen in the last two-three years, but if I had a choice of which year was the best for this body style, it would be 2014.

I do not think 2018 started out as the most entertaining season with the way the racing was, but as the season has gone on, we have seen some incredible races, and I feel as if this will continue as we get deeper into the year, specifically as we near the playoffs in a few weeks.

Q: Who is the championship favorite right now in the XFINITY Series? Or is there one at all? -Rachel G. Greensboro, N.C.

A: I have two names at the top of my list of championship favorites at the moment in the XFINITY Series, Christopher Bell and Justin Allgaier.

These two have been the best and most solid cars and drivers all year long. Bell has four wins in his rookie year in the series, and would be slightly ahead of Allgaier on my list. Allgaier now has three wins on the year after his impressive win at Mid-Ohio Sports Car Course last weekend.

Going into the next several races, I would expect both of those drivers to flex more of their muscle as to who has the upper hand going into the playoffs. There is another driver I am going to keep my eye on though as we near the playoffs too, and that is Daniel Hemric.

Hemric has had one of the most consistent seasons of anybody in the series, but he is still looking for that first win. He has been so close so many times, but I expect him to get it soon. His team is very strong right now, and if anybody can challenge Bell and Allgaier, I would pick Hemric as the one to do so.

I have three who I think will be in Homestead come November to compete for the title, so the important question is who is the fourth? I do not think we can pick a fourth at the moment — it is wide open as to who it can be. Guys like Cole Custer, Elliott Sadler and Brandon Jones are guys I would look at to be the fourth guy. None of them have wins, but they all have had solid seasons.

The XFINITY Series will have a great championship race in the playoffs. Bell, Allgaier and Hemric are the guys I would definitely look at to step up and dominate the series throughout the next 12 weeks as we get to Homestead.

Last few years have sucked for obvious reasons. This year takes cake with YAWN boredom, a certain few getting the clean air and riding it to victory. Nasty clear air. How is that racing? Nobody seems to be watching. Which is good. But the powers that be don’t care .BZF is gone for now, UNCLE JIM will continue to honor the network commitments that were so important to BZF. Nothing will change.