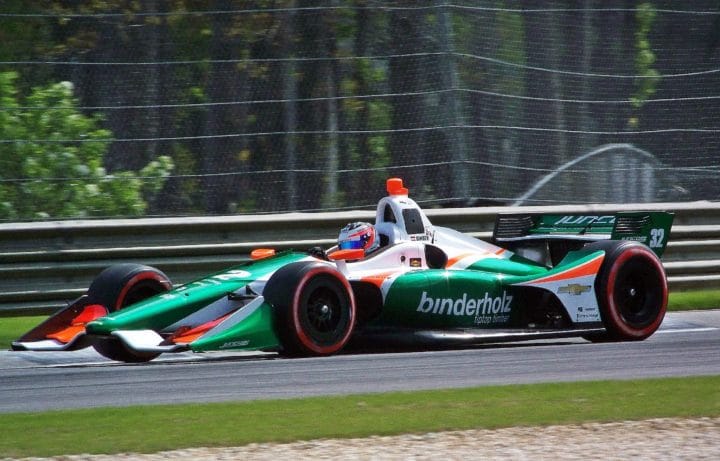 Juncos Racing announced Wednesday (Aug. 15) that they will enter the new DPi class of the IMSA WeatherTech SportsCar Championship full-time in 2019 with a Cadillac DPi-V.R.  Similar to the team’s current full-time entry in the Verizon IndyCar Series (pictured above), it will carry the No. 32.  It will be the team’s first foray into prototype racing in the United States.

“Our entry into the top class of the IMSA WeatherTech SportsCar Championship represents a significant step forward for our Company and also bolsters the depth and technical acumen of our Teams,” said owner Ricardo Juncos in a press release.  “We are also excited and humbled by the partnership with Cadillac and look forward to representing the Cadillac brand in the IMSA WeatherTech SportsCar Championship. Cadillac has a proven history of winning and performance within IMSA and provides Juncos Racing with a championship caliber partner to begin its entry into DPi.”

Cadillac is quite pleased to have Juncos Racing in the fold for 2019.

“The Cadillac Racing family continues to grow thanks to strong on-track performances by each team that has campaigned the DPi-V.R in its first two seasons of competition,” Cadillac Racing program manager Laura Wontrop Klauser stated.  “The addition of Juncos Racing brings more top-tier talent and excitement to the IMSA grid, and Cadillac is honored to help get the job done.”

The Juncos Racing announced means that there likely will be an increase in the number of Cadillac DPi-V.R.s on the grid full-time.  Last week, JDC-Miller MotorSports announced their intentions to race two Cadillacs full-time in 2019.  If all of the current teams running the Cadillac are back in 2019, that would meant that there would be seven Cadillacs on the grid in 2019.  It is currently unclear as to whether that would be the case.

Juncos Racing says that they plan on taking delivery of their Cadillac DPi-V.R. in November.  A testing programme would commence to get the team familiar with the Dallara-baed chassis.  Drivers for the 2019 season will be announced at a later date.