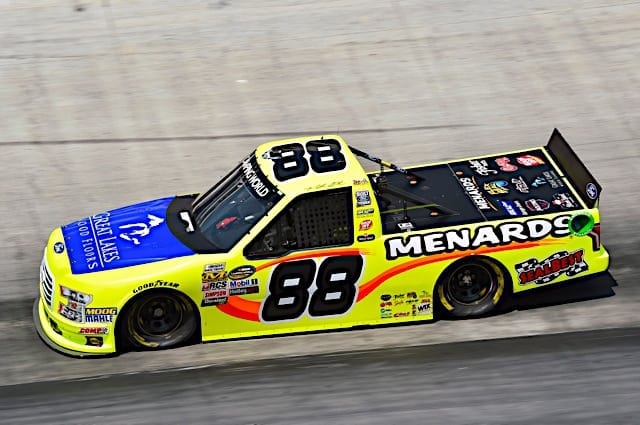 It took until the checkered flag of the Camping World Truck Series regular season finale at Bristol Motor Speedway, but Matt Crafton clinched a spot into the 2018 playoffs.

After getting some right front fender damage during qualifying, Crafton began Thursday’s (Aug. 16) UNOH 200 from 18th. By the end of stage one, the No. 88 truck was in 12th, though falling off the jack during its first pit stop.

By losing track position, Crafton could only rebound to 11th at the end of stage two, but with a good stop gained a couple positions on pit road, which would ultimately set the No. 88 up for an eighth-place finish.

“Tonight, we had crap for track position,” Crafton said after the race. “I was wishing there was another 50 laps because I know if we had track position we would have ran with those guys at the front.”

Crafton ended the regular season eighth on the playoff grid, over 100 points ahead of ninth-place. Meanwhile, 2018 hasn’t been one of the best years for the two-time champion, as he has nine top-10 finishes through the opening 16 races.

“I said it the other day, if we get in, we get in. If we don’t, we didn’t deserve to because we haven’t been ourselves this year,” he said. “I don’t know what it is, people all want to say the switch, but the [No.] 41 has had speed and in the past eight races we’ve gotten a lot better and been in the consistent group that we’ve been through in the past.

“We’ve always been able to put races together, top five, top five, get some wins. This year we’ve had too many 30th and 20th place finishes. We’ve been off a little bit, but I know with the packages we’ve worked on lately, I feel real good going into the playoffs.”

Out of drivers that needed to win in order to make the playoffs and potentially steal a spot from Crafton, Todd Gilliland came the closest, finishing fifth. Dalton Sargeant finished 11th, while Myatt Snider crashed out and finished 29th.

The series kicks off the opening round of the playoffs next weekend (Aug. 26) at Canadian Tire Motorsport Park. In five career starts at the track, Crafton has four top-10 finishes with a best finish of second in 2015.

“We’re going to a road course and you actually get to lift and shift and a whole bunch of stuff there,” he said. “I really feel good and know we can win one of these next three.”