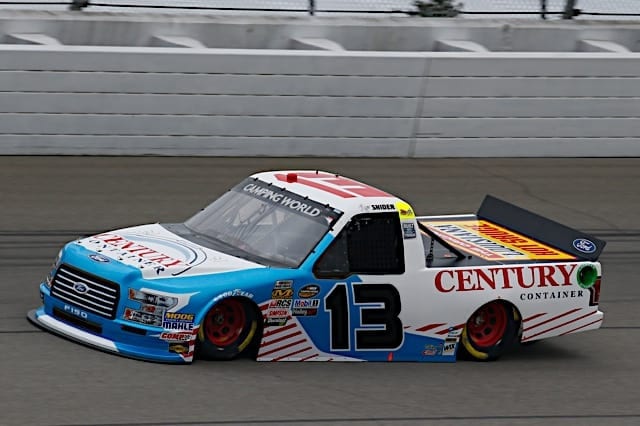 The Camping World Truck Series had a pair of practice sessions on Thursday (Aug. 16) for the UNOH 200 at Bristol Motor Speedway. Myatt Snider led the way for ThorSport Racing in the opening practice, as Stewart Friesen was on top of the scoring pylon in final practice.

Snider proved he has the speed to contend for the win on Thursday night, something he must do in order to make the playoffs this season.

Though 30th on the speed chart, Korbin Forrister turned 43 laps, the most in the session. Meanwhile, nine drivers made a 10-lap run, led by Parker Kligerman at 122.239 mph.

There was one incident in the session, when Brett Moffitt got into the side of Justin Fontaine, cutting down the left rear tire of the No. 45 truck. Fontaine continued after nudging it into the wall.

Despite being 12th in opening practice, Friesen jumped to the top of the board in final practice to pace the session.

John Hunter Nemechek was sixth on the chart, though also led the way in best 10-lap average at 122.264 mph. Snider, Dalton Sargeant, Gilliland and Kligerman made up the rest of the top 10.

After spinning in opening practice, Fontaine ran 73 laps in the final 55-minute session, by far the most of the 37 drivers to take time.

Qualifying for Thursday’s UNOH 200 will begin at 4:10 p.m. ET. Kyle Busch is the defending winner but is ineligible to run at Bristol this year since it’s the final race of the regular season.