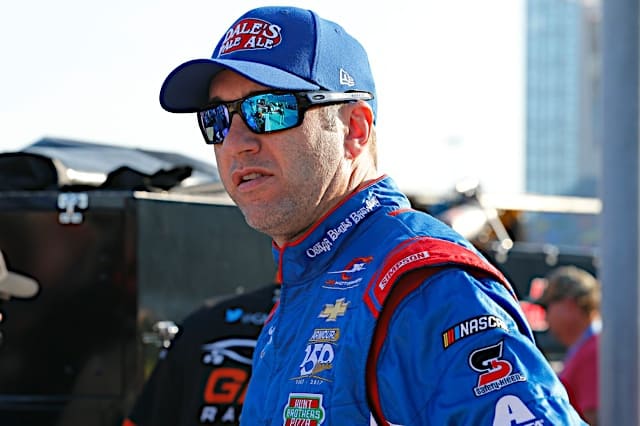 Who will drive the No. 95 next season?

Kahne, who will turn 39 next April, is the latest big name driver to retire in the last few years. It has been a short career by NASCAR standards but a fairly long one in any other sport; Kahne has not missed a Cup race since his very first in the 2004 Daytona 500.

Kahne’s departure will leave a hole in the No. 95 for next season, right smack dab in the middle of Silly Season. Last week, it was reported by numerous outlets that Kurt Busch will be leaving the No. 41 at Stewart-Haas Racing to jump ship to the No. 1 Chevrolet at Chip Ganassi Racing and that Ryan Preece and Daniel Hemric are both looking at potential rides with JTG Daugherty Racing next year.

Where this will leave Leavine Family Racing at, besides a decent pool of free agents to choose from, is unknown at this time. However, with its likely move to Toyota, it’ll be interesting to see if a driver like Christopher Bell or Preece could enter the conversation here.

As for Kahne, it seems like he has already made up his mind about moving on. He specifically mentioned racing sprint cars in his initial announcement post, and last year he told AutoWeek that he’d love to race sprint cars full time while also throwing in some Indycar and select NASCAR races. Motorsport reports Kahne declined a meeting with SHR to discuss replacing Busch next year, which would have been a significant improvement from the equipment he’s running in this year.

What’s next for Elliott Sadler?

Sadler, who at 43 is the oldest full-time driver in a competitive ride in the XFINITY Series, will cap off a career that featured him winning 17 total races across NASCAR’s three national touring series the past 23 years.

After winning five races in NXS competition for Diamond Ridge Motorsports in 1997 and 1998, Sadler was hired by Virginia-based Cup team Wood Brothers Racing to race full-time from 1999-2002 in the Cup Series. His biggest highlight of his tenure was getting WBR its only win from 1993-2010 when he won the spring Bristol Motor Speedway race in 2001.

In 2003, Sadler was hired by Robert Yates Racing to take over the old No. 28 Ford, which was renumbered to No. 38 and outfitted with a colorful new sponsor, M&M’s. Sadler had the best year of his career in 2004, winning two races and finishing ninth in points after making it into the inaugural field for NASCAR’s playoffs.

But those would be the last Cup wins of Sadler’s career, his lone playoffs berth and sole finish in the top 10 in Cup points. In 2006, after the Jeremy Mayfield saga erupted at Evernham Motorsports, Sadler was given an early release to replace Mayfield in the No. 19 mid season, a seat he would stay in until the car was discontinued due to lack of sponsorship after 2010.

Sadler than embarked on the next chapter of his career, having driven for a number of NXS teams in the past eight years. Although he has found a lot of success, having finished in the top five in driver’s points in all but one of those years so far, he hasn’t been able to hoist that elusive championship.

On Thursday, Sadler clarified that he’d be interested in running part-time for JR Motorsports next season and has already turned down similar offers from other race teams. Sadler came from a racing family; his father and uncle owned a part-time Cup team in the 1980s, and his younger brother Hermie Sadler is a longtime pit reporter for Fox Sports. Of all of his family, Sadler was by far the most successful on the racetrack.

JRM is expected to once again field four full-time NXS entries next season along with the part-time all-star car, but it’s unknown who will be in the seat for any of them outside of Michael Annett and most likely Justin Allgaier.

Can anybody surprise the Big Three this week?

As far as playoff spoilers, the one to watch this week might be Ricky Stenhouse Jr.

Stenhouse has had some fantastic runs at Bristol in the past, finishing second twice and fourth twice. Although he has won at both Talladega Superspeedway and Daytona International Speedway, it’s arguable that Stenhouse has been much more consistently successful at the bull ring.

Outside of Stenhouse, it’s the usual suspects. Well, two usual suspects. Kevin Harvick won the night race two years ago and has an average finish of an eye-popping 4.7 in the past six races at Bristol. Kyle Busch is… Kyle Busch at Bristol. If he was racing on Thursday and Friday, he’d definitely contend for yet another August sweep. Meanwhile, Martin Truex Jr. led over 100 laps last spring but hasn’t had a top-five finish in six-and-a-half years at Bristol and only one top 10 in that same time period.

To cap off a week of retirements, Fernando Alonso announced his retirement from competing in Formula 1 as well.

Alonso, a two-time world champion, is flirting with coming over to race in IndyCar next season, particularly with his upcoming road course test with Honda. If he does decide to do so, he’ll be following in the footsteps of other F1 greats such as Nigel Mansell and Rubens Barrichello in making the jump to open wheel.

It would be a big deal for IndyCar, even if Alonso decides he only wants to race in the 500 as he focuses on FIA World Endurance Championship. Having such a world-renowned driver could help bring thousands of new eyeballs to American open wheel racing, and at the very least it wouldn’t hurt the series for him to do so.

Whatever Alonso does next year, he’s probably going to have a lot more fun than his frustrating last few years at McLaren. The change to a Renault engine has helped improve the team’s results to solid point finishes most weeks, but with just how warm a reception Alonso was supposedly given last year at Indianapolis Motor Speedway (he said as much at the time), it’s easy for a multi-millionaire to decide to go race for wins in America and be given a hero’s reception than to struggle to finish top five while merely being given a respectable, one-of-the-guys type of response.

NASCAR has also reached out to Alonso on social media with an invitation to compete in the Daytona 500 in February. It got them attention, I guess?

Glad the 43 year old is retiring, so most of us will not have use him as a logical obvious common sense rebuttal to the clowns that say the XIFINITY series if for the young ones, up and coming newbies. A few more to retire and maybe they might have a point. As for KASEY KAHNE…have fun!

Alonso never mentioned the word ‘retirement’. He said he’s guna step away for awhile and mentioned the 2020 season he would look at, providing McLaren gets their shit together.