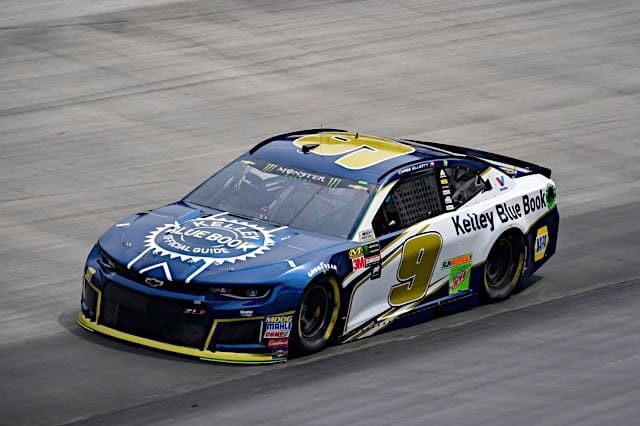 The two Monster Energy NASCAR Cup Series practices at Bristol Motor Speedway on Friday (Aug. 17) were topped by Chase Elliott and Kyle Busch, two drivers that are on separate sides of the spectrum when it comes to short track racing. Busch has won the last two races at Bristol, while Elliott is looking for his first short track victory.

Elliott ran a total of 55 laps, as all teams were in race setup. He led a trio of Chevrolets at the front of the field, as his Hendrick Motorsports teammate Alex Bowman was third in the session (126.295 mph).

Joey Logano was the best of the rest in sixth, while seven-time winner at Thunder Valley Kyle Busch was seventh, with five-time winner Kurt Busch in eighth. Ricky Stenhouse Jr. and Denny Hamlin completed the top 10.

Seven-time winner in 2018, Kevin Harvick, was mired in 15th in the opening 80 minutes of practice. The other member of the “Big 3,” Martin Truex Jr. was 17th. The reigning Cup Series champion was quickest in 10-lap average at 123.290 seconds, slightly faster than Kyle Busch.

Jesse Little turned 72 laps, the most of the 41 drivers who made a lap. This weekend is Little’s second-career race, should he qualify in on speed.

The No. 18 car made 47 laps, though the final few were solely preparing for qualifying. Busch is a tw0-time pole winner at Bristol.

Jones was sixth on the scoring chart, with Bowman, Elliott, Kurt Busch and Hamlin filling the top 10.

William Byron was 17th on single-lap speed, but ran a total of 97 laps, the most of all 41 drivers. Gray Gaulding was the slowest of the competitors, over eight-tenths of a second off the quick lap turned by Busch.

Qualifying for Saturday’s NRA Night Race is scheduled to get underway at 5:40 p.m. ET. Jones is the defending pole winner and led 260 laps, en route to a second-place finish.