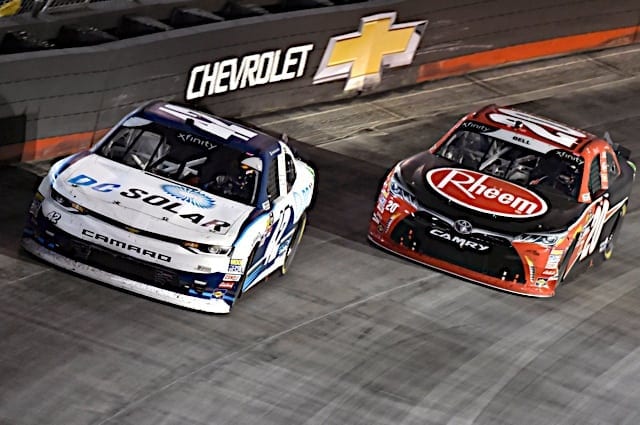 Christopher Bell came up short to Kyle Larson in the Food City 300 at Bristol Motor Speedway on Friday night (Aug. 17), but he was grinning ear to ear while doing it.

“I had a ton of fun tonight,” Bell said. “This was my first true Bristol race where you got the top going really good and the bottom is actually competitive there on long runs.”

Bell finished second in the race, but he did not go down without a fight. The NASCAR XFINITY Series rookie and points leader battled with Larson from the drop of the green flag to the checkered flag in overtime. The battle included several bumps and slide jobs — exactly what to expect from a couple of dirt trackers.

“Oh man, I was smiling inside of my helmet so big,” Bell said.

Bell and Larson are no strangers. The pair bonds over their love of riding the cushion on dirt tracks in their free time away from the NASCAR circuit. It’s obvious that there is a friendship off the track — each one always compliments the other’s driving ability whenever given the chance. It was only a matter of time before they finally duked it out on the NASCAR scene.

“I’ve kind of been waiting for a long time for me and Kyle [Larson] to race,” Bell said. “It seems like whenever we’re dirt racing, we’re racing each other a lot. And we haven’t really gotten to race each other on pavement yet. So that was really fun to race really hard with him.”

But early on, that battle was only for second place. Kyle Busch took off and led the opening 70 laps of the race — he was on pace to lap the field. But the door opened for Larson and Bell when Busch hit the wall, totaling the No. 18.

Bell was unable to get around Larson through most of stage 1, so his team tried a different strategy to try to get the upper-hand. He pitted with nine to go in the stage while Larson stayed out.

Bell started the second stage in third with Larson back in the pack. The No. 20 whipped around Elliott Sadler to take the lead, but Larson quickly marched his way up to second.

It seemed like Bell would hold off Larson until got into heavy lapped traffic and lost the lead to the No. 42.

“The guy in second definitely has an advantage when you’re getting through traffic,” Bell said. “Especially when the traffic is side-by-side.”

Bell would never see the top spot again for the rest of the night, but he certainly gave everything he had trying to get back to Larson’s bumper.

“I thought we had a shot at him if it stayed green,” Bell said.

On the final pit stop of the night, Bell fell from second to third when Chase Elliott beat him off pit road. Starting in the unfavorable third spot dropped Bell to fifth, and he was unable to regain any of the lost track position until the very end.

Bell said that he made the car too tight on the final adjustment to further hurt his cause.

Allgaier bobbled on the final lap, and Bell snuck by for a second place finish.

Bell now leads Allgaier in the standings by 13 points with four races left in the regular season.