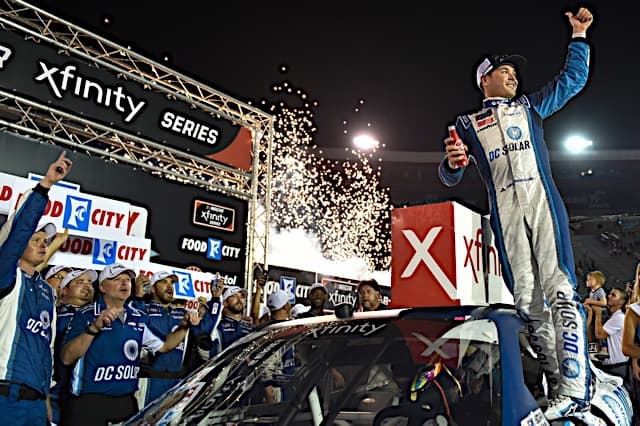 “I haven’t started looking for a broom,” Larson said in reference to trying to sweep the weekend at Bristol. “I always know how tough these things are to win. I’m just thankful for the opportunity.”

Prior to the race, Larson had six top fives at the track with a best of second place three times.

“I’ve always been fast here, just come up short at the end of the races,” Larson said. “I think I’ve learned a lot about this place and how to be good on the long runs.”

Larson fended off Justin Allgaier and Christopher Bell on an overtime restart to cruise to his 12th career NXS win. Larson has now won four of his six starts on the year.

Kyle Busch was the early favorite in the race. He started on the pole and took off immediately, catching the tail of the field in 10 laps.

The early action in the race happened far behind Busch in the battle for second place. Dirt trackers Bell and Larson had an action-packed battle featuring bumps and slide jobs all throughout the first stage.

Busch led the first 70 laps of the race and had lapped up to the 12th spot. All that changed on lap 71.

A few laps before that, Busch had scraped the wall. He hit the wall again a few laps later, then got back in the gas before his tire let go in the next turn. With 15 laps to go in stage 1, Busch went into the wall hard and brought out the first caution.

Larson assumed the race lead after Busch’s incident and won the first stage after a three-lap shootout to end it.

The green flag didn’t stay out long at the start of stage 2, as Spencer Boyd got into the back of Vinnie Miller, who then spun into Boyd.

On the lap 115 restart, Allgaier stuck his nose between Larson and Bell to make it three wide. Larson used the high lane to pull away with the lead, while Allgaier came away with second.

Bell eventually took second back, but Larson had checked out. The caution flew again on lap 141 when Chase Briscoe made contact on the inside of Ross Chastain and spun into the inside wall. The two were racing to stay on the lead lap, as Larson was coming.

On the next restart, Larson took off with the lead again, but Bell had a little more for him. Bell stayed right on Larson’s bumper until the caution came out for another Miller spin happened right in front of the leading pair on lap 160. Larson narrowly missed the wreck.

This caution came out with 10 laps to go in the stage, and many behind Larson gave up their track position to hit pit road. Larson fought off a challenge from Allgaier to win stage 2, while Elliott, Ryan Truex and Elliott Sadler rounded out the top five.

Sadler took over the lead when Larson and the other nine cars that stayed out pitted during the stage break. Sadler and JR Motorsports teammate Tyler Reddick took over the front row after they stayed out on each of the previous two cautions, while Bell restarted behind them.

On the lap 178 restart, Bell challenged Sadler for the lead, but Sadler fended off the rookie. The two raced side-by-side for several laps before Bell finally overtook Sadler.

After 10 laps under green, Larson was already back up to fourth. He eventually passed Sadler for second and started chasing down Bell with just over 100 laps to go.

Bell ran into heavy lapped traffic, and it allowed Larson to get underneath Bell and complete the pass for the lead. Larson was unable to pull away though. Bell hung right with him and continued to peak to Larson’s inside as the laps winded down.

“I guess I could anticipate his moves a little bit just because we’re the same driver and I knew what he would do,” Larson said. “So I could maybe be… a step ahead.”

The rookie eventually started to make a few mistakes and bobbled a few times, which allowed Larson to pull away. Larson’s blistering pace lapped up to 12th place.

It looked like Larson was riding off into the sunset until he scraped the wall, allowing Bell to come soaring back. The two raced side-by-side with Larson hanging on until Chad Finchum wrecked to bring out the caution with 42 laps to go.

Larson maintained the lead through the pit stops, but Elliott took second away from Bell. On the restart with 34 laps to go, Larson nailed the restart, while Allgaier followed him through to take second.

The No. 42 cruised almost all the way to the white flag, but the caution came out just before the flag waived when Daniel Hemric slammed into the inside wall. The caution led to overtime, giving Allgaier and Bell one more shot at Larson.

Allgaier charged hard to Larson’s inside on the final restart, but couldn’t stay with him on corner exit, and Larson ran away to pick up his first win at Thunder Valley.

With four races left in the regular season, Bell leads Allgaier by 13 points.

Surprise!!! Surprise!!! A cup winner wins another AAA race. And the band plays on.

New potatoes. Went to the neighbors and picked 30 ears of corn. Baby back ribs from the pig we bought at the fair 3 weeks ago. There was a race tonight?

Went out to dinner wife the wife. Much better use of our time.

Seems Like Kyle B’s “talent” got him a DNF again.

I tuned in for the start and after 15 laps 8 cars were a lap down. That was enough of the Kyle Busch Benefit for me.

The Cup drivers are killing the Xfinity series.