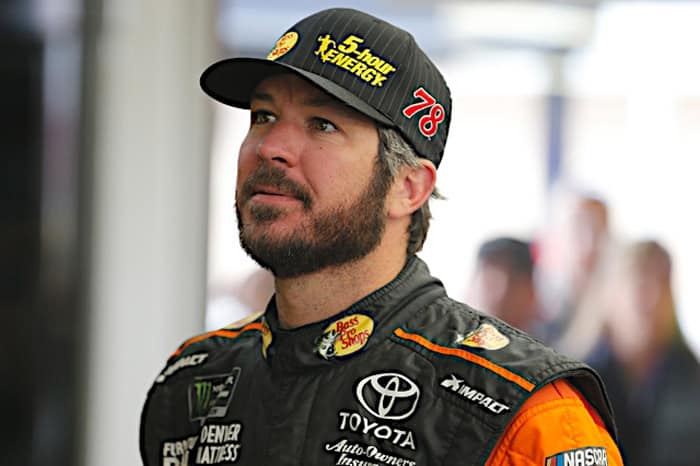 In mid-July, 5-hour Energy announced it wouldn’t be returning to Furniture Row Racing in 2019, after spending 2017 and 2018 with the team. Through 23 races this season, the company has been the primary sponsor of the No. 78 car for nine races, winning at Sonoma Raceway.

On Friday at Bristol Motor Speedway, Truex couldn’t confirm whether he will be back at Furniture Row Racing next year or not.

“Honestly, I really don’t know. I think in another week or two I’ll have a better answer for you,” Truex said in a press conference. “Right now, we need sponsorship and that’s as simple as it gets. It’s hard to say, is there a 50 percent chance we get that in a couple weeks or a hundred percent chance or two percent, I don’t know. I can tell you that everything is based upon that.”

Truex is also in the final year of his current contract with Furniture Row Racing, the team he’s competed with since the beginning of 2014. In four-and-a-half years together, the No. 78 team has won 17 races.

The driver admitted he’s beginning to hear “rumors” of where his future may lie.

“That’s kind of how it works in this sport, I’ve been in this position before,” he said. “I’ve got a great team – Barney [Visser, team owner] has done a lot for my career. It’s something we all want to keep going and just need a little bit of time to let the dominoes fall into place and see if we can keep it going and if not, I have to figure it out from there.”

Between 2005 and 2015, Visser sponsored the No. 78 car out of his own pockets with Furniture Row being stamped on the car. This season is the first time since FRR’s inception that the team is fully-funded.

Despite the rumors and uncertainty, Truex has won four races this year, sitting third in the championship standings.

“I would say that the biggest thing for us as a group because we’ve kind of been in this situation before, really the past couple seasons we’ve been at a tipping point at some point in time and we’ve just been able to focus on doing our jobs,” Truex said. “We always feel like that at the end of the day, if we do our jobs and we do them well and we’re winning races, that’s our best opportunity to keep things going the way they are.”

The Cup Series is racing at Bristol this weekend where Truex has a best finish of second.

Is it just me or is the implosion of NASCAR accelerating?

It’s not just you. They are imploding and they can’t seem to realize it is happening.

Here’s what is up (in my opinion): Barney Visser feels he has paid his dues (and spent his millions) getting FRR to championship status and feels like he should not have to dip into his pocket to fund the team again. He must be trying to convince Bass Pro/Cabela’s to end their relationships with RCR, SHR and Jamie McMurray at CGR and consolidate their NASCAR sponsorship on the #78. The problem is that SHR’s Tony Stewart has a long-standing personal services contract with Bass Pro and is close friends with Bass Pro’s owner., Johnny Morris. Also, Richard Childress has a long-standing relationship with Bass Pro and friendship with Morris. McMurray’s PS contract is less of an issue.

With Kurt Busch likely moving on from the #41 at SHR, Stewart and Gene Haas have probably flown out to Bass Pro HQ to offer to take on Martin Truex and Cole Pern and give them the #41 ride. A similar situation exists at RCR and the #31 where Ryan Newman’s contract is up for renewal and a Truex/Pern team would help upgrade that ride, which has been underperforming. These are the moving parts that Barney Visser has to deal with in his attempt to renegotiate his contracts with Bass Pro, Truex, Pern and TRD/JGR.

JT nailed it. Living here in Denver I’ve followed Furniture Row since their inception. Besides the Bass Pro issue the other issue I see is that Furniture Row is affiliated with Joe Gibbs Racing. How happy do you think JGR is that an affiliate, with the exception of Kyle Busch, is kicking JGR’s other cars each week?

I see 2 possible happenings. 1. Barney Visser has accomplished his goals and at the end of 2018 he shuts the team down. Or 2. Toyota steps up to not only help bring sponsorship to the 78 but also help bring the 77 out of retirement and they run two fully funded teams next year(Christopher Bell).

I sure hope its #2 but I’m fearing it will be number 1. That would be a shame.