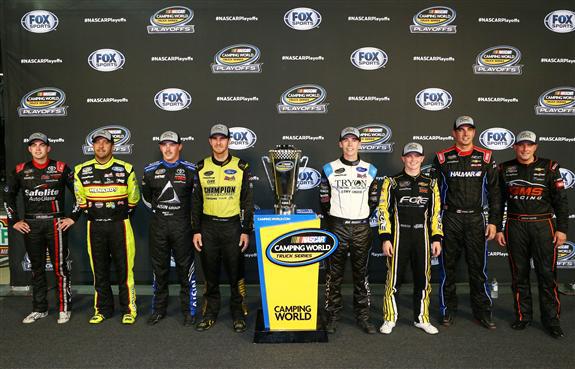 In a Nutshell: Johnny Sauter took his fifth victory of 2018 at Bristol Motor Speedway Thursday night just 0.236 seconds ahead of Stewart Friesen.

“I’m so proud of this team. I knew we had a great truck today,” Sauter said. “What a way to cap off the regular season with a win. I had to race really hard with the [No.] 52 (Friesen) there for a while, which was exciting.

The driver of the No. 21 Chevrolet took advantage of a late-race motor issue for dominant driver John Hunter Nemechek to win the UNOH 200. Nemechek, Parker Kligerman and Todd Gilliland rounded out the top five.

Nemechek swept both stages and nearly won the whole thing, but relinquished the top spot with just five laps remaining.

At a loss for words. We put on a clinic tonight, led a ton of laps! Had motor issues at the end of the race while leading and came home 3rd. Another one that slipped away! Learn from it and get better! Looking forward to the future. #nemechek42

Simply starting the race clinched the regular season championship for Sauter and granted him an additional 15 playoff points to take along with him on the hunt for a second championship. He enters the playoffs next weekend at Canadian Tire Motorsports Park with a 15-point lead over Brett Moffitt.

A ? and the Regular Season Championship?

Who Should Have Won: John Hunter Nemechek had the field covered at Bristol. After pole-sitter Christopher Bell led the first 31 laps, the driver of the No. 8 Chevrolet checked out on the field, opening up a more than six-second lead before the end of stage one. He went on to sweep both stages and nearly won the race after leading a race-high 104 laps. But a slight stumble gave Sauter the opening he needed to score his fifth win of the season.

Once Grant Enfinger started the race, he locked himself into the championship battle as well. Meanwhile, Stewart Friesen solidified his spot in the playoffs with a seventh-place spot at the end of stage one. He went on to finish in the runner-up position by the time the race ended.

But Matt Crafton had to wait until the checkered flag flew and Sauter took his fifth win of the season to know he would get the shot to race for the championship this season.

After missing a handful of races earlier this season before his 18th birthday, Todd Gilliland entered Bristol needing a victory to make the playoffs. And despite a lot of hope and momentum on his side, it looked like his shot at the win was over before it ever began.

On lap 69, Gilliland got loose while racing inside Jesse Little and slid up into the driver of the No. 97 Ford. The damage on Little’s truck was much worse than Gilliland’s, though he did spin and lost a ton of track position. To add insult to injury, the driver of the No. 4 Toyota was busted for pitting outside his pit box and was held a lap before he was able to resume.

Despite the setback, Gilliland kept a level head and capitalized on a wave around to rejoin the lead lap under the fifth and final caution. He raced his way all the way up to an eventual fifth-place finishing position and may have had a shot at Victory Lane if not for the 77-lap green-flag run to close out the race.

“Spinning out – your pride is crushed there. It’s one of the worst things that could happen,” Gilliland explained. “Then just getting that one lap penalty really put us behind and then after that Kyle (Busch) just came on the radio and said we really needed to work the top here.

“We’ve watched plenty of film with him doing it, so there’s no reason that we couldn’t and luckily we were able to get around these guys fairly quick. That was a lot of fun. That was the most fun I’ve had in a truck race by far.”

While he didn’t make the playoffs, which is any driver’s goal, especially in their rookie season, Gilliland should walk away knowing his team is making strides each week. Even a spin and a mistake on pit road didn’t doom the No. 4 team and a win could be just around the corner.

Replacing an ill Harrison Burton, who was originally scheduled to pilot the No. 51 Toyota for Kyle Busch Motorsports, Bell made his first Truck Series start of the season at Bristol.

On short notice, the 2017 series champion jumped in the truck qualified on the pole. He went on to lead the first 31 laps before relinquishing the top spot to John Hunter Nemechek, who clearly had the truck to beat at Bristol.

But despite losing the lead, Bell remained inside the top five for much of the race before he suffered power steering problems late. When the checkered flag flew, he was 28th.

No. of rookies to finish in the top 10: 1; Todd Gilliland, finished fifth

As far as those outside the top eight, Myatt Snider leads the charge there with a seven-point advantage over fellow rookie Dalton Sargeant. Just one marker back is Todd Gilliland in 11th, followed by Cody Coughlin. Austin Hill, Austin Wayne Self and Wendell Chavous round out the top 15.

Now THAT'S how you do it … ?? pic.twitter.com/yI1RRBxIXW

Thank you all for the support it’s definitely been a rough couple of days. I want nothing more than to be out there racing @BMSupdates with my @KBMteam guys. It’s gonna break my heart to not be racing tomorrow but I know the 51 is in good hands with @CBellRacing go get the win!

Up Next: The Camping World Truck Series heads to Canadian Tire Motorsports Park next Sunday for a road course showdown to open the playoffs. Coverage for the Chevrolet Silverado 250 begins at 2:30 p.m. ET on FOX Sports 1; the race can also be heard on your local MRN affiliate or SiriusXM NASCAR Channel 90.

Johnny Sauter is the biggest sore loser in NASCAR. He makes Kyle Busch look like a Poly Anna.