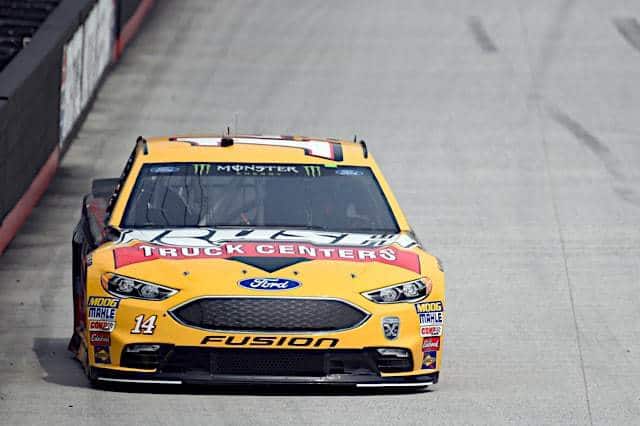 Clint Bowyer looked to be on his way to a third checkered flag of the season on Saturday night (Aug. 18) at Bristol Motor Speedway. That was until a late-race restart sent the No. 14 backward.

Bowyer began the event in 16th but rocketed to the front during the first stage, finishing third. The second stage was much of the same for the No. 14 team as he crossed the finish line in sixth, earning an additional five stage points.

Then stage three rolled around, and that’s where Bowyer really stepped up.

On lap 356, Bowyer drove past Kyle Larson for the lead. While the No. 14 pulled away, other drivers like Kyle Busch, Martin Truex Jr., Chase Elliott and Kevin Harvick encountered their own problems. The seas parted for Bowyer’s Ford to take full control.

The No. 14 would spend the next 86 laps in front of the pack before a caution came out. Bowyer’s crew kept his advantage, where he would lead for another 34 laps (120 total) before a yellow flag for Brad Keselowski‘s spin.

This time, Bowyer had teammate Kurt Busch to his inside but he didn’t get a good restart, losing his ability to control the race. Busch edged him out, pulling a slide job for the lead and the No. 14 faded from there. A race that seemed to be in Bowyer’s hands, especially as other contenders faltered became a disappointing sixth-place result.

“I just clearly didn’t do a good job on the restarts when I had the lead,” Bowyer said after the race. “I thought I had a good lead and about the time I shifted, Kurt [Busch] hit me in the door and it lifted the tires up. He didn’t do anything wrong.

“When I restarted on the bottom, I spun the tires and they all got around me. If the caution hadn’t of come out, could of, should of, would of.”

It was Bowyer’s first top-10 finish since Chicagoland Speedway in early July. However, he remains fifth in the point standings, as Busch, his Stewart-Haas Racing teammate, went to Victory Lane instead.

“It’s disappointing. You get a car that good and get that close, you hate not to come home with it,” he said. “All in all, for as terrible as we started the weekend, and as bad as our yesterday was, to even lead laps and be in the top 10, I’m pretty surprised. In the grand scheme of things, it was a good run for us. You hate to give them up like that.”

The series now has a week off before heading to Darlington Raceway. In 12 career starts at the famed track, Bowyer’s got a best finish of ninth in 2007.