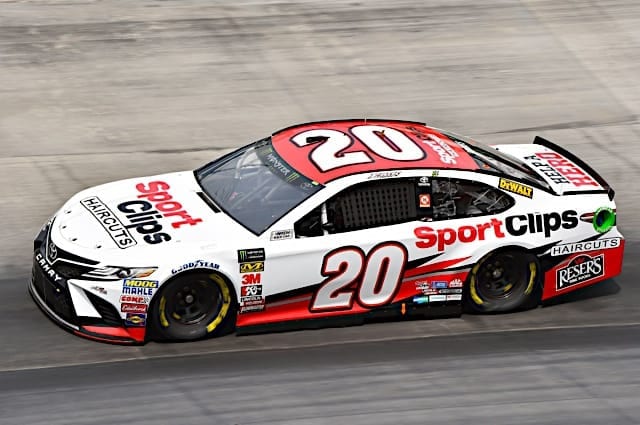 The 2017 Bristol night race was Erik Jones‘ coming out party. One year later, he’s hoping to go to Victory Lane.

Jones, 22, won his first-career Monster Energy NASCAR Cup Series pole at Bristol Motor Speedway last August. During the first two stages, he finished second and fifth, but needed a win to get into the playoffs, then competing for Furniture Row Racing.

As the race began to wind down, Jones’ mentor, Kyle Busch, chased down the rookie driver, who was looking for his sixth-career victory in Thunder Valley. The No. 18 car surpassed Jones for the top spot, though Jones led a race-high 260 laps.

“At this point last year, we needed to win a race to get into the playoffs and we thought this was going to be our shot to do that, and we came within 50 laps of doing it,” Jones told Frontstretch on Friday at Bristol. “It did hurt because we felt like we did everything right and everything we needed to do to be in contention to win it, and we were. We led laps, but just didn’t do a perfect job of keeping up with the racetrack once the VHT wore off and the line moved up.”

Jones’ Cup history at Bristol dates back to 2015, when he filled in for an injured Hamlin following a rain delay. It’s the site of two XFINITY Series triumphs, the last coming in the spring of 2017.

However, his Cup results have been mixed at the Last Great Colosseum. Jones has the runner-up finish to Busch last season, but in two other starts, he has finishes of 17th and 26th. But he takes last year’s runner-up finish as a lesson, believing this year the No. 20 team could go to Victory Lane.

“I think we have a better idea of what the track is going to do and how it’s going to move around,” Jones said. “Hopefully, I can do a better job of keeping up on that adjustment wise, and finish one out here.

Regardless of the result, Bristol is still one of his top stops on the schedule.

“I think it’s always one I have circled coming back to, whether it’s in the spring or in the fall,” Jones said. “Obviously, the night race last year was really good for us. We’ve been looking back to getting to this race since we took the checkered flag last year. Bristol is definitely pretty high up there on the list of favorites.”

Like 2017, Jones comes into Bristol with momentum rolling. Over the past eight races, the No. 20 team has six top-10 finishes, including his first series win at Daytona. He has an additional pair of top-five results at Pocono Raceway and Watkins Glen International.

When it comes to his first time competing in the playoffs for a Cup champion, his goals are pretty straight.

“I’d love to make it through the first round and to the Round of 12, and then if we can make it to the Round of 8 that would be a great win for us,” he said. “That’s not an easy thing to do to get to that Round of 8. If we could do that, I feel pretty accomplished for our first playoffs.”